Six months ago, I wrote a Shelterforce article about my work as the director of community development with Homewise on one of the oldest drugstores in New Mexico, B. Ruppe, which has a long and fascinating history. At that time we had recently lost our tenant and were considering a non-traditional approach to redeveloping and leasing the building. Since then, we’ve been working to open the space up for a period of free community use, inadvertently discovering a dynamic way to make commercial redevelopment a strategy to strengthen social cohesion and help preserve the changing neighborhood’s identity.

Over the last 50 years we’ve gotten much better at recognizing the importance of preserving historic buildings, but don’t think as much about preserving the intangible heritage of communities—things like oral traditions, performing arts, and neighborhood rituals. Similarly, we acknowledge that a sustainable future must include green design, but we don’t talk about how honoring the history and cultural relevance of certain places is also key to sustaining communities. It’s time for developers and preservationists to do more than preserve buildings; we must also work to maintain the cultural identity of the places we are redeveloping.

Sustainable development, by one definition, is development that meets the needs of present generations without compromising the abilities of future generations to meet their own needs.

“A broader concept of sustainable development includes not only environmental, but also economic, social, and cultural aspects. It is generally recognized that the 21st century will be a century of globalization. Notwithstanding the benefits of economic globalization, it causes the substantive threat of cultural globalization. Therefore, it is fundamental for every community to identify and maintain its own characteristic features that reflect diversity and identity of the place.”

New Mexico is an economically poor state but is rich in “identity of place.” The cultural homogenization associated with gentrification has come late to Albuquerque, the state’s largest city, but its impending arrival is palpable. Orange sharing-scooters are appearing, and microbreweries have sprouted up downtown. Barelas, a village formed in the 1600s at the place where travelers on the Camino Real crossed the Rio Grande, is now a small neighborhood absorbed into the center of Albuquerque’s sprawling 197-square-mile footprint. Located adjacent to the shuttered railyards—a redevelopment project of the current mayor—Barelas is right in the middle of a changing landscape.

In many ways, this is good news. For decades, Barelas’ population declined as residents moved away due to a depressed economy and safety concerns. A 2015 University of New Mexico study determined that over 25 percent of its buildings were vacant. Those vacancy rates exacerbated already low home values and inhibited the success of local businesses. (As described in a Lincoln Land Institute report, long-term vacancy contributes not only to economic decline, it negatively affects quality of life and residents’ sense of well-being.) On Fourth Street, the neighborhood’s once-thriving business corridor, many local businesses—like the B. Ruppe Drugstore—closed up shop. Ruppe first opened in 1883, and by the time it closed in 2011, it had been transformed from a typical pharmacy into a yerberia (or medicinal herbal store) by co-owner Maclovia Zamora.

Zamora’s portrait, painted in 2014 by artist Nanibah Chacon, adorns the north side of the Ruppe building and is a tribute to her contributions. The mural itself symbolizes the cultural significance of the business. Homewise, the CDFI and nonprofit developer that I work for, purchased the building in 2017 to ensure that this cultural asset’s long and interesting history was not erased by insensitive redevelopment. We didn’t know exactly how we would approach redeveloping it, though.

The first time I walked into the building was the summer of 2018, and even though it had formally closed seven years prior it looked as though it was still operational. Herbs were hung to dry on the wall in the back room, tinctures that Zamora had made to treat various ailments lined the shelves behind the pharmacy counter, and there were a plethora of oils, candles, and Catholic religious objects throughout. As I dug into the building’s contents, the cultural and historical significance of what had been left behind was clear. Nearly 40 years of correspondence, hand-written recipes for medicinal herbal tinctures, and index cards of prayers and meditations—the records of Maclovia Zamora’s evolution into a medicinal herbalist and healer—were at risk of being thrown out.

By the time it closed, Ruppe had become an informal yet significant cultural institution within the fields of curanderismo and herbalism. Zamora had established relationships with healers in northern New Mexico and in Mexico, and she would often host a curandera from Mexico City to provide treatments and education to clients. The tenuous connection between traditional and indigenous medicine is stronger in New Mexico than many other parts of the country, but the transfer of knowledge remains largely informal and is incumbent upon the next generation learning from elders like Maclovia. The wealth of information held within Ruppe’s walls at the time of her passing represented an important part of the renewal of this knowledge.

What to do with this treasure trove of knowledge and history? It was hard to find precedents to our approach to redevelopment. The field of development does not look back much, except in historic preservation circles which often fetishize the aesthetic of old places rather than work to maintain cultural identity in redevelopment. I knew that Zamora had worked very hard to share the knowledge she gained about medicinal herbs and other healing practices. In academic language, this lifetime of accumulated information is called knowledge capital, and is understood to be a critical resource for the well-being of future generations, who depend on what we leave behind.

One of the many assets in Barelas is the National Hispanic Cultural Center (NHCC), an institution dedicated to the preservation, promotion, and advancement of Hispanic culture, arts, and humanities. As the deadline approached to clear out the building, I reached out to Valerie Martinez, a very talented, thoughtful staff member at the NHCC. I brought Valerie to the building to see what remained. We determined that the NHCC could establish a digital archive of Zamora’s life and work from the many photos, letters, recipes, and other items left inside, thus protecting and preserving the knowledge capital for future generations.

Using cultural preservation as a sustainable development strategy can increase social cohesion in the midst of changing neighborhoods and communities. When I first began working at Homewise, I met with community leaders throughout the neighborhood, and sometimes received an icy initial reception. People were understandably wary to trust a developer and were fearful that the change coming to Ruppe would erase their history. Cristina Rogers, Barelas Mainstreet director and Barelas resident, described it this way: “Lots of development and redevelopment has happened in Barelas that hasn’t benefited the neighborhood. When Homewise first moved into the area and started buying buildings to renovate, people were asking, ‘Is this going to be the Homewise neighborhood?’ There was definitely a fear of a large organization moving in combined with people not understanding what a community development finance institution [CDFI] is and how that’s different from a regular bank.”

After a few failed attempts at finding a permanent tenant for the B. Ruppe building, we instead decided to do a simple renovation and open the space up for a period of free community use. We felt this would be an important signal to neighborhood residents that they were still welcome in this new version of the old Ruppe and that, while the building was changing, its legacy as an informal community institution was not.

The response to our community space activation period has been overwhelming. In the first month of community use, we hosted events 27 out of 31 days. Events included Ballet Folklorico classes taught by a local resident and dancer, a pop-up art opening called ALTAR that featured Día de los Muertos altars made by local artists, yoga classes, a poetry night dedicated to increasing mental health through self-expression, a weekly teen arts project led by an arts-based community engagement organizational called Artful Life, a live podcast recording, a jewelry-making workshop, a conference session for creative entrepreneurs, a writing workshop, and a community photo exhibit of family photos sourced from the neighborhood.

Culture is never static. The etymology of the word is the Latin cultura, meaning to grow, to cultivate. To be able to “maintain the characteristic features that reflect diversity and identity of a place,” development must not only preserve cultural history but also support culture-bearers, artists, and everyday residents to carry on their traditions.

“If Ruppe, such a beloved place in the community, had sat empty or become a random business with no connection to the past, I think it really would have depressed people,” says Cristina Rogers. “They would have felt like, ‘It’s over. We will get gentrified.’ Instead it’s a community space. People are thinking about using it, thinking about different ways to use it—an important first step to help people become more entrepreneurial. Here is a space for you to use, how will you use it?”

Capital Sources to Support Developers Who Care About Cultural Preservation

This is the exact question we are eager to see answers to. How are people using the space, and could this use evolve into a long-term tenancy? One of the advantages of this period of free use is the exposure the building is getting to a broad range of people, some of whom have reached out to ask about a potential lease. Our previous plan involved a single tenant taking occupancy of the entire building, but now we are considering the idea of a year of smaller leases that would preserve the large main space for use of tenants and the public, although this could only be done with some kind of subsidy.

Leasing a commercial space to smaller, local operators rather than an established chain is an inherently riskier, slower, and potentially less lucrative, route. And yet, we know that local businesses bring so much more character to a neighborhood and allow small-scale entrepreneurs a way to make a living. If we value these things, we must create capital sources that can support this slower, more inclusive way of redeveloping commercial buildings that fosters small-scale economic development.

The historic tax credit is a great way to defray redevelopment costs of some older buildings, but is not always a feasible route. What if municipalities provided an easy-to-access subsidy for the redevelopment of empty commercial spaces for the future use of local businesses? What if local and national foundations created funding sources that could cover the operational costs for a year while developers made some or all of their newly renovated buildings available for community use? Impact investors that will take below-market rate returns are an excellent long-term strategy for making a less profitable lease option work. This, in combination with small amounts of funding that could subsidize some of the renovation costs and initial period of community use, could be a dynamic combination that kick starts local businesses returning to neighborhoods with high vacancy rates.

At Homewise, we’ve been cross-subsidizing the community use at the Ruppe because we believe the social cohesion being fostered is worth it. But to do this at scale, small developers need not only the creativity and vision to make it happen, they need modest financial support. 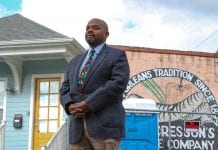 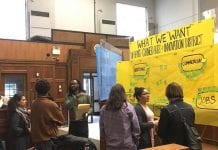 Arts for Community Control: Planning an Arts and Innovation District Without Displacement