High and rising rents were already problems in Miami-Dade County before the pandemic began in early 2020. Residents who live in the Florida county have suffered from a severe affordable housing crisis, and a large percentage of renter households there—about 65 percent—are cost burdened, meaning they pay over 30 percent of their income on rent.

But in late 2020 and early 2021, when the Miami Workers Center (MWC) set out to take the pulse of what was happening with tenants amid pandemic stresses and loss of employment, it was landlord problems—not rent prices—that topped the list of tenants’ deepest concerns.

“Affordability didn’t come up as the leading priority of the community,” says Santra Denis, executive director of MWC, a grassroots group formed in 1999 to fight for worker and tenant rights.

Surveying some 3,000 Miami-Dade County tenants, MWC staffers heard about mold in units that caused young children to end up in the emergency room; a decrepit building housing school-aged children in an apartment that lacked a functioning toilet for months; and an elderly veteran who endured flooding in his apartment each time he showered.

So MWC responded. “We didn’t want to be tone deaf,” Denis says. “Easily, we could have pushed for affordable housing—‘Let’s build!’—but landlord accountability rose to the top, and so we pivoted in that direction.”

Tenants were facing many landlord-related issues, but they didn’t know how to get them addressed or where to turn for help. “If your landlord doesn’t fix appliances, if you’re having rodent infestations, if you’re experiencing illegal eviction, if they’re doing utility turnoffs or locking you out—what can tenants do in those cases?” she says. “Or what if you’re being discriminated against because you have a domestic violence voucher?”

Over the next year, MWC focused its organizing efforts on landlord accountability, pushing local officials to enact a package of tenant reforms that would protect the more than half-million renter households in the county.

Tenants just won a Tenant Bill of Rights in Miami-Dade County, unanimously. 🎉 Neighbors organizing with other neighbors won this, and the struggle continues! ✊🏾 #TenantPower pic.twitter.com/EPKRjsXyGq

“Some of these evictions pre-date way back to college, when a roommate didn’t pay,” Denis says. “We don’t believe that 10 or 20 years later, that should be still impacting people.”

The ordinance also forbids retaliation against tenants who make complaints or exercise their rights. A new Office of Housing Advocacy (OHA), created just before the bill of rights passed, is a central clearinghouse for receiving complaints, developing resources, and coordinating housing issues across agencies.

Before launching the campaign publicly, MWC spent months listening to tenants to define the rights they would fight for. A bill of rights handbook spells out the tenants’ demands and the reasons for them, and highlights some first-person stories. 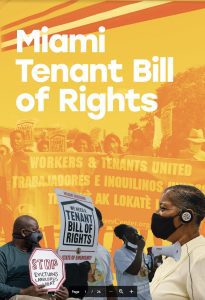 “For each of our demands, there was a story that came directly from our base,” says Denis. “And we worked to change the message around who’s being evicted—while it’s often presented [by opponents of tenant protections] as ‘young single people who just don’t want to pay’—it’s actually mothers with children, and it’s elderly people.”

MWC also worked to dispel the notion opponents often promote that tenant protections hurt small mom and pop landlords, emphasizing that it’s large corporate landlords who hurt tenants the most. For example, according to a Community Justice Project analysis, of 101 recent eviction filings in the county, 80 percent were filed by LLCs or corporate landlords.

“Small landlords are not the highest offenders. So neutralizing that language was important,” Denis says.

In July 2021, it was time to identify commissioners who would support and champion the tenant rights package. “Commissioner Jean Monestime, who has a passion for affordable housing, signed on as a sponsor. Commissioner Raquel Regalado became a co-sponsor. We did our rounds with all of them to see if we had enough votes,” Denis says.

Meanwhile, organizers engaged in “lots of meetings with our partners, having public press conferences, doing some building fights where tenants were experiencing mass displacement,” she says. In the months leading up to the bill of rights hearing, some other key legislation passed that increased the required notice for evictions and rent increases from 15 to 60 days and allotted funding for the OHA. All of this, along with the accelerating post-pandemic rent increases, sustained a wave of attention that helped keep tenant needs in the public eye and on the commission’s radar.

MWC also helped prepare tenants who were willing to speak publicly, and as the campaign proceeded, some 15 to 20 tenants shared their stories at rallies, county commission meetings, and in videos.

On May 3—the day commissioners were to vote on the tenant bill of rights—organizers showed up to the commission chambers in force. Many spent the entire day there. After a drawn-out debate on how to balance tenant and landlord rights, and even an attempt by some commissioners to delay the vote, they eventually hashed out some amendments (for instance, one that ensures that rent can only be deducted for “reasonable repairs” of damages not tenant-caused) and then passed the bill of rights unanimously late in the afternoon.

Tips for Others Organizing for Tenant Protections

Denis says it was useful to look at kindred cities in the South or Midwest, such as Kansas City—where organizers won a tenant bill of rights in 2019 and tenant right to counsel in 2021—to study how progressive tenant rights can be won locally in less-than-progressive climates.

In Miami-Dade, it helped that bill sponsor Monestime was a longtime commissioner and influential leader. “Understand the dynamics: Is this someone who is well-liked? Will they be able to champion this item and get support from their peers?” Denis advises. “Who you choose to champion this is critical.”

And it might seem to go without saying, but Denis reminds organizers, “Make sure the community is aware. Do the work to make sure they’re on board. If all your community members are calling and showing up, the commissioners have to listen.”

Alana Greer, director and co-founder of the Community Justice Project (CJP), stresses that lawyer partners can be useful at every stage of a campaign. CJP’s movement lawyers partnered closely with MWC on the bill of rights effort. They helped MWC locate tenants to survey; educated advocates and commissioners on what policies could be changed at the local level in a state with preemption laws that block many tenant-friendly policies; and advised on ordinance language. CJP also joined with Miami-based Oolite Arts to support a film project in which a filmmaker and a community expert teamed up to create a documentary about the bill of rights’ journey.

And finally, think big. “The organizers really pushed us and the commission on going after multiple policies—a whole package at once,” Greer says. “Prior to this, organizers tended to work on issues on a piecemeal basis. Miami Workers Center was bold, saying let’s go for a bigger platform. And they were right.”

Over the summer, advocates worked to push for additional funding for OHA staffing and for a tenant right to counsel program in advance of this fall’s budget cycle. Evictions continue to affect Miami renters, particularly single mothers of color, and only a tiny percentage of tenants facing eviction have legal representation.

But that doesn’t mean tenants and organizers can’t savor victories along the way. “We’re still on a high in terms of what folks were able to accomplish. It was super special,” Denis says. “People have been through a lot, and they needed this.”