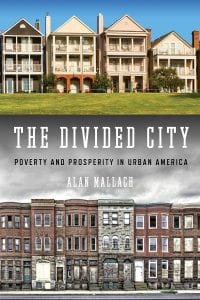 Indianapolis is widely heralded as one of the more robust cities in the American Rust Belt. Beginning in the late 1990s, local officials led a major revitalization of Fall Creek Place, a neighborhood located north of downtown, transforming what was a disinvested aging neighborhood into a vibrant community of tree-lined streets and restored historic homes. Today, young college graduates are moving into neighborhoods around downtown and housing prices are increasing at such a rapid clip that some locals are worried about displacement.

But the story of the city’s changing fortunes is more complicated than the narrative of renewal suggests. As Alan Mallach writes in his timely new book, The Divided City, five census tracts recorded gains in income and home values between 2000 and 2014, while more than 60 census tracts suffered declines. In one-third of Indianapolis neighborhoods, families are becoming poorer and housing is losing value. There are struggling communities spread across much of the city, with large clusters in the eastern and western portions, where communities of color are concentrated.

Indianapolis is not alone. Mallach explains that even as former industrial cities revive, economic inequity, racial segregation, and concentrated poverty are growing. In Baltimore, for every one person living in a community on the upswing, four people live in one that is declining. In St. Louis, the ratio is 1 to 17.

An influx of tech-savvy millennials and a shift from manufacturing to a knowledge-based economy put a glossy veneer on America’s older urban cores. But just beyond the cafés and gleaming condos, homes are crumbling, land stands vacant, stores are shuttered, and residents—largely people of color—see little of their city’s new prosperity.

How different would cities look and how different would people’s lives be if those with the power to set policy and invest resources prioritized the most vulnerable residents and the neighborhoods they live in?

Mallach, a senior fellow at the Center for Community Progress, offers a cogent, data-driven analysis of urban polarization, how we got here, and what it will take to create inclusive cities that work for all. He brushes past San Francisco, Boston, and other coastal hot markets, which dominate national discussions about the resurgence of cities, to focus on the urban centers of the heartland—places hollowed out by disinvestment, suburban development, the collapse of manufacturing, the loss of good jobs, and the exodus of populations. As Detroit, Cleveland, Pittsburgh, Buffalo, and other older cities rebound, some beyond their wildest expectations, Mallach wrestles with an unsettling question: Is it really a comeback if a city leaves so many of its residents behind?

This did not happen by chance or by the force of the free market. Nor was the gaping division between rich and poor, Black and white, inevitable. Mallach rightly asserts that racial and spatial segregation of the urban landscape were the result of policy designed to accomplish exactly that. Zoning regulations and home-lending rules through much of the 20th century barred African Americans and other targeted groups from moving into many neighborhoods, effectively cutting people off from opportunity and economic mobility. In the 1960s and beyond, municipalities razed Black neighborhoods in the name of urban renewal. People of color were hit first and worst by deindustrialization at the end of the last century and the mortgage crisis at the beginning of this one.

Although other scholars have covered this history, Mallach provides valuable grounding in the politics and policies of race and place that shaped cities. He also describes how the legacy of racism haunts cities to this day. Some state legislatures resist even modest efforts by cities to improve prospects for their residents by, for example, raising minimum wages.

Mallach acknowledges the key lesson of failed community development initiatives over decades: Cities cannot build their way out of polarization and poverty. New convention centers, arenas, and even prettier housing erected in neighborhoods isolated from jobs and good schools will not move cities toward shared, sustainable prosperity. Rather, policies and investments must address the needs of people, particularly the most vulnerable. Mallach points to education, job creation, workforce development, and transportation as centerpieces of any serious effort to expand opportunity, foster inclusion, and restore hope.

Mallach calls for regional visions, not narrowly local thinking, to develop strong, sustainable, diversified economies. He also makes the case for federal policies that strengthen the safety net and provide critical financial support for housing. But he believes that change ultimately must come through local action, not federal policy. A successful movement for equity and opportunity, he contends, will be hundreds of local movements—a long, slow, hard “slog,” city by city. “The era when the federal government could drive change as it did with the civil rights laws of the 1960s is long past,” he writes.

In my view, bold federal action is essential to bring best practices to the scale needed to create pathways to opportunity for the millions of people who have been left behind. While the federal government has retreated sharply on opportunity, fairness, and fundamental rights—and while the current administration is working mightily to erase hard-won progress toward full inclusion—equity leaders must not resign themselves to an unacceptable status quo. It is more important than ever stick to the long game: changing policies, systems, power dynamics, and possibilities for low-income people and people of color. Activists and advocates must formulate far-reaching ideas, set ambitious goals, and build national alliances to push those ideas forward. And many people are doing that, in inspiring ways.

For example, momentum is building around a federal jobs guarantee. This public option for employing all adults would address fundamental flaws in the labor market, which Mallach describes so well, including structural unemployment, racial disparities, wage stagnation, and automation. Is the nation likely to see such an option in today’s political climate? Of course not. But that is not stopping leaders from laying groundwork for the big, bold initiatives the country sorely needs.

The future of cities is impossible to predict. How will climate change, technology like driverless cars, and automation challenge communities and regions? Social and economic upheaval is perhaps the only certainty, Mallach writes, and offers guidance on how cities can strengthen resilience to deal with it. He urges municipal leaders to rethink governance to be responsive and open to sharing power with citizens. Think long term. Improve quality of life for the many, not the few. And build human capital to renew cities as places of opportunity and reinvent them as engines of prosperity for all.