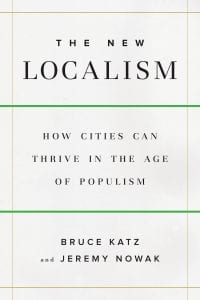 The New Localism: How Cities Can Thrive in the Age of Populism by Bruce Katz and Jeremy Nowak, two leading national thinkers about American cities, offers many valuable ideas that people involved in rebuilding cities can learn from. At the same time, while well worth reading, its equivocations and omissions are not only also significant, but tell us something important about the failure of what passes for liberal policies in today’s America.

Katz and Nowak’s central argument is that cities are not passive participants in the national and global economy. They have the power to determine—to an unprecedented degree—their futures. At a time when the federal government, not to mention many state governments, are profoundly dysfunctional, that is a lesson that must sink in. While there are important things that the federal government can—and should, but probably won’t—do, those things are not going to determine the fate of our cities. The cities will. This point, with which I strongly agree and stress in my new book The Divided City, should become part of the mental map of everyone working for change in American cities. It doesn’t mean that federal and state governments are not important—they play critical roles—but meaningful change will, or will not, happen by virtue of what happens at the local level, driven by local actors.

Their corollary, equally important, is that the only way cities can carve out their own path to growth is by leveraging their strengths, building real partnerships through which governance is shared by “government, business, philanthropy, universities, and the broader community,” and by leveraging untapped or uncoordinated financial resources to fund investment in their future, or as the authors put it, “by converting their market power into tangible, investable resources.” Katz and Nowak offer detailed case studies of economic revival in Pittsburgh and Indianapolis, both highly relevant, as well as Copenhagen, somewhat less so. They are all well worth reading, as are the shorter profiles of two creative partnerships that have shown their ability to be transformative, 3CDC in Cincinnati and the Philadelphia Industrial Development Corporation.

It was while reading the glowing description of Indianapolis’ revival, though, that I found myself wondering whether Katz and Nowak were writing about the same city that I thought I knew. About a year and a half ago, I was asked to study economic and neighborhood conditions in Indianapolis. Looking at the city from that perspective, I didn’t find a success story or a role model, but a city that was falling behind not only the United States, but behind peer cities like Columbus or Kansas City, on just about every metric of economic well-being. The average household had lost more than 20 percent in real income since 2000; there were 10 census tracts that were going downhill for every one that was reviving or gentrifying.

That doesn’t mean that anything Katz and Nowak describe is not true. On the contrary, what it means is that the story they tell is only one part of the urban story in 21st-century America. There’s another big part of that story—the lives of the people outside the elite coalition driving economic development in places like Indianapolis. That part is largely missing from this book. What they’re writing about is critically important, in that without economic revival, there can be little hope for meaningfully creating opportunities and changing the lives of those outside the leadership coalitions they celebrate, but it’s not enough.

Katz and Nowak appear to recognize this and devote a chapter to inclusion, but, with the partial exception of a thoughtful discussion of K-12 education and the importance of expanding education to encompass pre-K and community college, their discussion of these issues is off-hand, even perfunctory. They make no effort to grapple with the nature of the barriers to inclusion and opportunity, or the complexity of the solutions; or, for that matter, the issue of race, which forms the inescapable subtext in any serious discussion of the future of American cities. Similarly, while they acknowledge that many cities, like Flint, Michigan, or Camden, New Jersey, lack the underlying assets that allow leadership coalitions to build new economies in places like Pittsburgh or Indianapolis, they clearly have no idea what to say about those places, offering only a few not particularly productive thoughts before changing the subject to something more congenial. Indeed, this would have been a far stronger book had the authors acknowledged up front that The New Localism was about the economic transformation of larger cities and metros, period, an important enough issue in itself.

That leads, though, to the underlying concern I had with this book, which might not have occurred to me had the authors not chosen to flaunt it, beginning with the book’s subtitle. This calls for some context. The New Localism can be seen as a product of what has been called technocratic liberalism, a philosophy best known through the writings of the New York Times’ Thomas Friedman. Whatever the value of Katz and Nowak’s proposals (and they have real value) their vision of elite local coalitions remaking urban economies around cutting-edge technologies has little or nothing to do with the forces driving the populist revolution roiling the developed nations of the world. That revolution—a term that I do not believe overstates what is going on—is driven by a host of factors, in which peoples’ alienation from and loss of confidence in the political system, and the increasing polarization of a society in which decisions are made by elites economically, socially, and geographically remote from the majority of the population, matter as much as economic inequality and insecurity. Technocratic solutions, which is how I would characterize the Indianapolis success story they tell, do not nurture equality and inclusion, let alone rebuild confidence in our atrophying, increasingly dysfunctional political and civic institutions. Indeed, they can easily make matters worse.

This book offers an important lesson to people in the community development field. The strategies that Katz and Nowak describe so well are emerging, in different forms and frameworks, in the innovation centers, tech hubs, and biotech parks of cities across the United States, and in the growth strategies of these cities’ principal institutions and corporations. Yet few people in community development, defined broadly—including people working in education, workforce opportunity, and other issues over and above the physical condition of urban neighborhoods—are at the table as this is taking place, and many are not even aware of what’s going on in their cities’ boardrooms. If the benefits of urban revival are to be felt by these cities’ lower-income residents and struggling neighborhoods, their advocates and leaders need to do a far better job engaging with those setting the course of that revival, and pushing their way, if need be, to seats at the table.