Some researchers think that the best biomarkers for linking social service investment to long-term health will involve those that indicate inflammation, strongly correlated with stress, and now seen by many in medicine as important factors in everything from heart disease to cancer to Alzheimer’s. Inflammation markers can shift quickly with changes in the environment, notes Apostolos Davillas, senior research officer at the Institute for Social and Economic Research at the University of Essex in the U.K. “It can show us how socioeconomic status can literally get under someone’s skin.”

—from Politico’s “Health Care’s Upstream Condundrum,” (which is also a very good overview of the importance of, and challenges to, moving “upstream” in fighting health problems and health disparities.)

The housing affordability crisis may be developing into an eviction crisis, suggests an article from Governing. While Matthew Desmond, author of the Pulitzer Prize-winning book Evicted, might suggest we should consider ourselves already there, it seems like the data about the mismatch between incomes and rents suggests that it’s about to get even worse. Getting tenant protections, legal assistance, and emergency rental assistance plans in place sooner rather than later could make a huge difference for many families while we work on longer-term solutions like more affordable housing and higher wages.

Unaffordable “affordable” housing? You probably wouldn’t consider the rents at Prospect Heights in Brooklyn affordable. One- and two-bedroom units are still available at Pacific Park Brooklyn for $2,680 and $3,223 a month, respectively. The units, geared toward middle-income households, haven’t rented easily and the developer is now offering one month of free rent. We’re not sure that’s going to help. Middle-income households most likely have better, more affordable options available.

Discussions of equity across neighborhoods in a city often contain phrases like “Well, in the mayor’s neighborhood, the streets get plowed/potholes fixed/etc.” The mayor of Albany, NY, Kathy Sheehan, who has spoken frequently about neighborhood equity (though still running into criticism over handling of a police killing and passing of a trash pick up fee), has decided to walk the talk. Ready to downsize, as many couples with adult children are, the mayor and her husband have bought a house in need of substantial rehab on the edge of one of the city’s poor, segregated neighborhoods, walking distance from City Hall. A mayor hasn’t lived in that neighborhood since 1883. It will be fascinating to see if proximity affects the mayor’s policies and perceptions (The director of the Hartford Community Loan Fund found that it did for him). It seems possible, but by no means guaranteed.

Imagine this: A standing-room-only meeting where an affordable housing development is up for discussion. History tells us that a large number of people at that meeting would fall into the NIMBY category, but that wasn’t the case in Magnolia, Seattle, where the city is proposing more than 200 units of housing at a vacant decommissioned Army base. Residents who attended the recent, hours-long meeting overwhelmingly supported the plan, which will include apartments for homeless seniors, Habitat for Humanity row houses and town homes, and rent-restricted houses for people making 60 percent of the area median income or less. The YIMBY attitude was definitely a surprise, especially considering the fact that the plan has had opposition in the past. Is this what happens when housing options get really bad?

Wells Fargo says it will close 800 bank branches by 2020, catching it up with other big banks that have had higher bank closure rates than Wells. The bank says the decision is about consumer shifts to mobile banking, but others think it has to do with legal troubles. Advocates for fair credit and community reinvestment are less concerned about the motive, however, and more concerned about the effect. “Wells claims it is trying to improve its Community Reinvestment Act record after it was downgraded to ‘Needs to Improve,’” says Matthew Lee of Inner City Press/Fair Finance Watch. “But it is closing itself off to communities where it will close branches. Some may maintain access via the Internet, but others will be driven back to check cashiers and high cost lenders. . . . These [closures] should be fought. Where they are in low- and moderate-income census tracts, the public still has a right to comment that should be used.”

According to a Washington Post article, President Trump’s aggressive deportation strategy could negatively affect the housing market. A report from the National Bureau of Economic Research that was used in the November 2016 article estimates that there are 1.1 million undocumented workers employed in the construction industry in the U.S. If substantial numbers of these individuals were removed from the country, the value of the labor of those left would increase, driving construction—and housing—costs, up, according to the article. At the time of this posting, DACA (Deferred Action for Childhood Arrivals) is a key negotiating point over a new government spending bill that has yet to be approved. 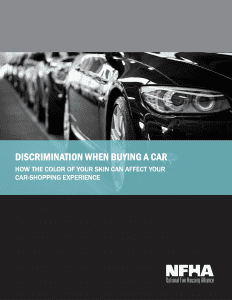 As if you didn’t already hate going to a car dealership . . . The National Fair Housing Alliance released a scathing report that illustrates widespread discrimination in the auto industry. While all races had difficulty obtaining information about the best auto loan option for them, 62.5 percent of non-white testers received more costly pricing options even though they were more qualified than their white counterparts. The testers of color who experienced discrimination would have paid an average of $2,662 more over the life of their auto loan, according to Discrimination When Buying a Car—How the Color of Your Skin Can Affect Your Car Shopping Experience. Auto loans are the third most prevalent kind of debt, according to report, and this discrimination “undoubtedly played a part in creating the racial and ethnic wealth gaps and credit access disparities that exist in the U.S. today, and it will ensure that they persist if allowed to continue unchecked.”

We know that organizations in the nonprofit sector tend to be the best equipped to mobilize in times of crisis—they are familiar with a community’s most vulnerable members and know how to reach and coordinate with service providers, among other things. Disaster preparedness is key, as is recognizing a job very well done (New Hope Housing’s 10-day turnaround of temporary housing for Hurricane Harvey survivors), but sharing lessons learned after the storm has passed is equally important. Mina Kumar of Families Empowered in Houston, Texas, shared some lessons that her organization has learned in the aftermath of Hurricane Harvey. The list includes communicating the potential scope of need (beyond infrastructure) to funders in advance of the next disaster, and acknowledging that everyone—including organization staff—has lived through the same trauma.

Congratulations to Northwestern Mutual for exceeding its local hire requirements on its new Northwestern Mutual Tower and Commons in Milwaukee. The insurance company’s project received over $50 million in development subsidy and was required to have 40 percent of project work hours completed by unemployed or underemployed city residents and 25 percent of the project’s costs completed by certified small- business enterprises. The company did both, and better, as noted in its final hiring report done with the city’s Office of Small Business Development, with final numbers coming in at 43.5 and 31.4, respectively.

The City of Los Angeles has announced a plan to utilize land it owns to provide temporary housing for homeless people living on the street. The proposal, to be presented to the City Council for approval, says that several trailers will be used to accommodate about 60 homeless individuals—many who currently live on the streets around the identified parking lot site at Arcadia and Alameda streets. The plan is estimated to cost $2.3 million in the first year and then $1.3 million annually to keep it running. The intention is to move people into permanent housing after six months, and operate the shelter for about three years. Mayor Eric Garcetti says he has hopes that if successful, this strategy can be expanded to more city-owned property.

Is a change underway for land use negotiations in NYC? Councilman Corey Johnson, who was elected to serve as speaker of the council earlier this year, says he plans on taking a more active role in the council’s land use negotiations, something his predecessor did not do. Future development has typically been left to district legislatures to control. While Johnson says he’ll “continue to allow members to determine the fate of projects in their neighborhoods,” if he disagrees with the project, he says he’d overrule them.