One of our most popular articles of the past couple of years was “Workforce Housing Is an Insulting Term.” An important part of that argument was that it was insulting because it was being used to refer to only a moderate-income band of housing, not the full spectrum of affordability, implying that low-wage or underemployed workers are not part of the workforce. We noted that if it were merely a replacement for “affordable” in the ever-evolving quest for language that doesn’t push buttons, it wouldn’t bother us so much. Well, that seems to be what’s happening in Dane County, Wisconsin, where “workforce housing” is being used “interchangeably” with affordable housing to refer to developments that reach as deep as 30 percent of area median income, in a bid for neighborhood acceptance. We give them a pass on our dislike of the term.

The Urban Institute has made a great case for why we need to expand housing assistance, not shrink it (ahem, Mr. Carson, ahem). But we got a little stuck on the point that the already-plenty-bad statistic we’ve been citing regularly about how only 1 out of 4 households eligible for housing assistance gets it has gotten worse—now, they’ve found, it’s only 1 out of 5.

Refusing to implement Obama-era rules might not be as easy as Ben Carson’s HUD would like to think. In December, a judge handed down an injunction requiring that HUD not delay implementation of the Small Area Fair Market Rent (SAFMR) rule, designed to increase access to neighborhoods of opportunity. We covered one look at how the SAFMR rule might play out around when HUD announced its delay attempt; the Furman Center has released another one, which finds that fears of an overall decrease in available units are not borne out in the markets the rule applies to. 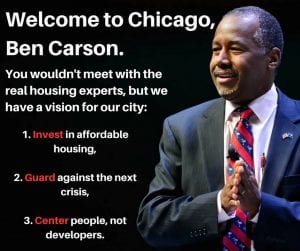 Fair housing advocates are hoping the same legal principles will apply to HUD’s more recent announcement that it will delay the implementation of the long-labored Affirmatively Furthering Fair Housing regulations. Reaction to that announcement was swift, with a denouncement from former HUD secretary Julian Castro and a letter signed by 76 civil rights organizations calling on HUD to reverse the decision. Protesters also took the issue to HUD Secretary Ben Carson at a public appearance in Chicago. Carson, not surprisingly, did not engage, which led the folks at CarsonWatch to start the hashtag #BenCarsonRanAway. Carson might have thought HUD was a nice low-profile appointment where he could tinker with people’s lives in away from the headlines, but it seems he thought wrong.

Supporting locally owned businesses isn’t just about supporting business owners. A report from the Institute for Self Reliance finds that while competition from Amazon is hurting all businesses, it’s hurting chains worse than independent businesses, making chains a less reliable part of the retail environment. Something to think about when picking an anchor tenant or weighing in on an economic development plan.

Sightline Institute in Seattle proposes a way to better balance the tension between historic preservation and housing supply—making historic designations that restrict housing development come with a compensating upzone somewhere else in the same neighborhood. We’d be curious to see how that played out in practice. It is an interesting contrast to the folks in Durham, North Carolina, who are hoping that historic preservation of a neighborhood of mill cottages will slow down their replacement by bigger, more expensive (but not likely denser) homes. Markets do differ.

If you live in the U.S., you know that the #MeToo and #TimesUp movements have highlighted the pervasiveness of sexual harassment, assault, and misconduct against women in the workplace. The media focus has largely been on women in media and Hollywood, but women’s rights activists and supporters have worked hard to redirect attention to the women whose stories go untold—in industries like manufacturing, retail, hospitality, agriculture, and domestic work. A win for that cause was had at the Golden Globes Awards, when several actresses brought women’s rights advocates as their guests to help articulate the issue. One of those women was Ai-jen Poo, director of the National Domestic Workers Alliance, who Shelterforce interviewed in 2015 after she’d received a MacArthur award. We can say a lot more, but for now, we salute Ai-jen and all the women who are making sure this movement is inclusive of race, class, and sexuality.

With news on this administration’s assaults to immigrant rights coming every day, we found this piece on KUOW.org to be particularly powerful. It is the story of a young man (and DACA recipient) responding to an attempted ICE (Immigration and Customs Enforcement) arrest at the apartment building he manages. The story is not only powerful but instructional, as he details the steps he took to prevent the unlawful arrest, steps he learned via the Washington Immigrant Solidarity Network, a coalition of organizations and volunteers. The Network’s goal is not to interfere with law enforcement, but rather “to hold [ICE] accountable that they have to do the right thing.”

Nashville can count itself among the cities holding companies accountable to the promises they make when trying to receive development subsidies. A new ordinance, nicknamed the “Do Better” bill, was recently passed by the Nashville Metro Council and requires that companies provide specifics on the “good” they intend to do, as well as prior safety and wage practices. The bill also enables the council to suspend or end an incentive agreement if it finds a company isn’t satisfying their agreement. Granted, not all companies are promising a $5 billion construction budget and 50,000 high-paying jobs like Amazon is with its new headquarters (and not all cities are as extreme in their bids to get them), but it is encouraging to see local government placing the interests of their constituents at least as high as potential profit.

In a move that in essence gives a turbo boost to inequity, 529 college savings plans will no longer be just for college anymore, thanks to Sen. Ted Cruz—and states are worried. In a last-minute change to the country’s new tax plan, Cruz’s amendment allows 529 savings plans to be used to fund K-12 private and religious educations. The change creates a short-term tax shelter in which families can deposit then withdraw funds to pay for ongoing education costs, as opposed to the long term tax-deferred savings the plans were designed to build. An nprED article details how this change may encourage many more people than before to invest in 529s, creating greater state revenue loss due to tax breaks. We’ve discussed the barriers to participation in 529s for lower-income families, and it seems that if this encourages participation, it will be for the upper-income families who can already afford to send their children to private schools.

The largest low-income housing program in California will utilize opportunity maps starting in 2018 as part of the siting criteria for new housing projects for families with children. This announcement follows research by the Haas Institute for a Fair and Inclusive Society that found that LIHTC projects for families in the Bay Area were overwhelmingly sited in low-opportunity areas. These opportunity maps, which seem to have taken the advice of Edward Goetz, use the Haas Institute’s Opportunity Mapping framework and incorporate the most up-to-date research on upward mobility and intergenerational opportunity.

Raising awareness is one thing, but if you don’t translate that awareness into action, what’s the point? That’s the crux of “Stop Raising Awareness Already” in the Stanford Social Innovation Review, and it seems like the year-old piece really hit a nerve because it was SSIR’s most-read article of 2017.  Organizations and activists need to move beyond just raising awareness and focus on “concrete calls to action that get people to change how they feel, think, or act, and as a result create long-lasting change.”

From homeless “cluster sites” to affordable housing by any means necessary? New York City Mayor Bill de Blasio announced a plan that would convert many of the city’s homeless apartments into affordable housing. If landlords refuse to sell their properties to nonprofit developers, the city intends to use the (gasp!) eminent domain card. The planned acquisition, which could place about 3,000 people into permanent housing, involves 800 apartments that are located mostly in the Bronx, according to the New York Times. The cluster sites have come under serious scrutiny in recent years, and an investigation revealed serious deficiencies, including health and safety violations like extensive vermin infestations, and non-working smoke and carbon monoxide detectors.

What do you think: Does segregation matter for Latinos? Of course it does, but probably more than you thought. A paper by Jorge De la Roca, Ingrid Gould Ellen, and Justin Steil published at the tail-end of last year estimates the effects of residential racial segregation on socio-economic outcomes for native-born Latino young adults over the past three decades. It’s definitely worth the read.

Involvement in religious groups is said to have positive outcomes for youth, including better mental and physical health and lower levels of substance abuse, but churches are vanishing in low-income communities, which “are arguably in most need of the social supports churches provide.” That’s because these institutions aren’t able to get as much money from the low-income communities they serve. “Ministers are incentivized to plant and grow their churches in areas where people can afford to give money away.” Churches and other third places—locations where a range of people gather and interact—are vital to communities. What can be done to address this financial conundrum?