“Opportunity” is the new, ubiquitous catchword of contemporary housing policy today—as in “geography of opportunity,” “opportunity neighborhoods,” “opportunity mapping,” and no doubt many others. We have converted the word from a noun into an adjective; opportunity is now a place—to be precise, it is a type of neighborhood: one that among its many assets is rich in amenities, free from environmental and social hazards, and graced with good schools. In short, it is the kind of place that increases one’s chances for upward mobility.

As with many catchwords, however, it is prone to misuse and is sometimes invoked in ways that are sloppy and ill-conceived. If we are truly going to reduce our housing policy objectives to the realm of goals related to “opportunity” (a topic that deserves separate consideration) I would like to offer some guidelines for its proper use.

There are at least three ways in which this concept is commonly misused by policymakers, analysts, and advocates. The first is to measure the existence of opportunity by looking at who lives where.

Think, for example, of the MTO program or the Gautreaux mobility program. Though practices have changed over time, in those programs, as in most all mobility programs, “opportunity neighborhoods” are defined as places where few poor people live and/or few people of color. If there is a utility to the concept of “opportunity neighborhoods” it would be to identify areas that offer advantages to people so that, presumably, policymakers, planners, and advocates can then determine which groups have the greatest or least access to them. In the early days of opportunity mapping, however, it was standard to simply map race and/or poverty and call low-poverty or predominantly white neighborhoods “opportunity” areas (it is still possible to find so-called opportunity maps that are simply maps of race and/or poverty).

Sometimes other characteristics, such as welfare use or female-headed household status, are used. Regardless, such practices confuse the idea of a geography of opportunity with the geography of people. This, of course, defeats the purpose of opportunity mapping in the first place, as such maps don’t illuminate anything about who lives near opportunity, they assume it. In addition, such maps problematize certain groups (people of color, the poor) while valorizing others (whites, the affluent).

The message that these maps convey is that communities of color and lower-income neighborhoods lack value, an idea we should have left behind years ago. This type of “opportunity mapping” is simply old-fashioned demographic mapping that tells us little about where opportunity resides. It is a way to make a map about race without calling it a map of race, and it is no innovation at all.

The second mistake is in treating opportunity as a binary phenomenon. When you are shown a map of “opportunity neighborhoods” that divides a city or metro area into “have” and “have not” areas, be wary. We know the world doesn’t work like that, and that neighborhoods simultaneously embody many different and often contrasting realities. Opportunity maps that purport to summarize urban neighborhoods in a single dichotomy obscure much more than they reveal.

The problem arises when we collapse these different dimensions into a single index of opportunity, map that index, and then present that result in an opportunity map. This last step is almost irresistible to those who may want (or need) an easily digestible summary from which to work, but doing so fails us in many ways.

A single index also forces us, at the mapping stage, to judge the relative importance of each of the individual dimensions. How do we weight these different dimensions? The default assumption is that they are all of equal importance, but we know that this is probably not the case for any group of people within a metro area. Schools are less relevant to the childless, transit less relevant to those with automobiles, and jobs less relevant to seniors. The weighting of the different dimensions of opportunity is best left to the consumers of opportunity maps (advocates, activists, policymakers), not the producers. An index necessarily relies on the analyst’s judgment of the relative importance of the different dimensions and produces a geography of opportunity that incorporates that judgment. The rationale for that judgment is almost never revealed and would be difficult to defend if it were. 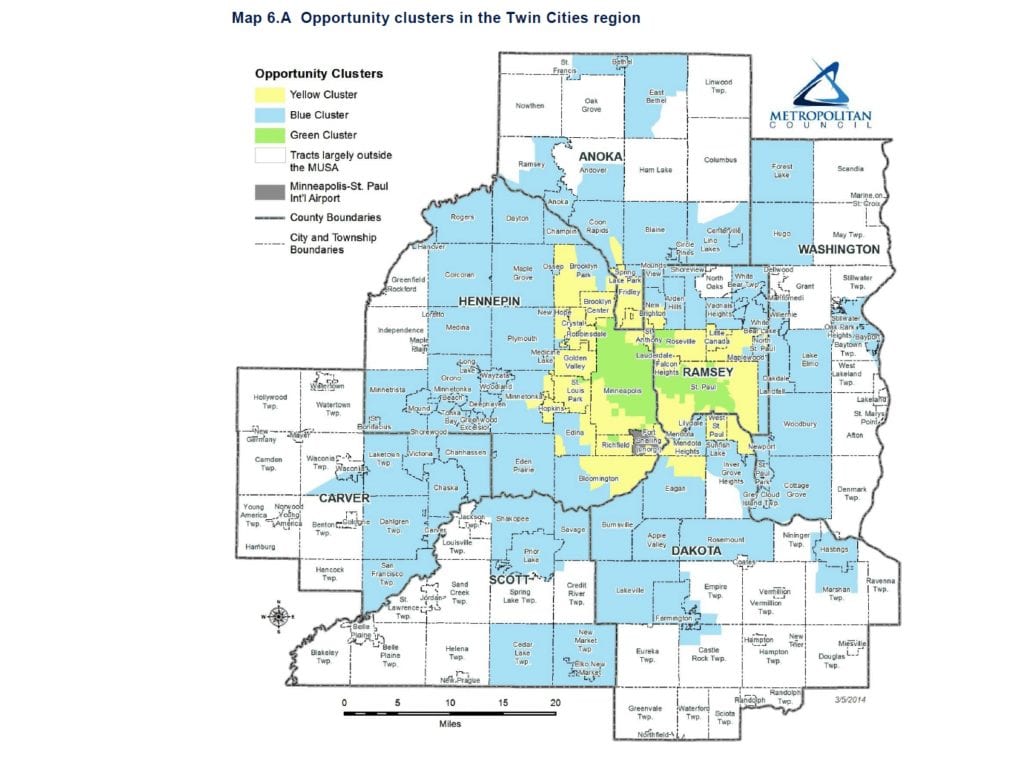 In the case of clusters, we can apply a principal component or factor analysis to the data to identify the ways in which different types of opportunities co-vary, and so identify and map neighborhoods according to the dimensions of opportunity that they bundle. And so, one might typically find neighborhoods that are rich in transit service are proximate to large numbers of jobs. Other clusters may have high values related to school quality, low transit service, and few environmental hazards. Any number of combinations is possible, but a statistical analysis of the different geographies of opportunity could bring these clusters to light.

Opportunity mapping should be a way of illuminating relevant spatial dynamics in metropolitan areas. The next time you encounter an opportunity map, or a discussion of opportunity neighborhoods (if you are a professional in this field, it won’t be a long wait) apply these guidelines. If what you are hearing or reading does not meet them, chances are high that important realities are being obscured or simplified. If it is something you are reading, stop reading—you are wasting your time. If it is something you are hearing, raise your hand, ask the speaker to stop wasting your time, and suggest better ways to address the issue of opportunity neighborhoods. Politely, of course.