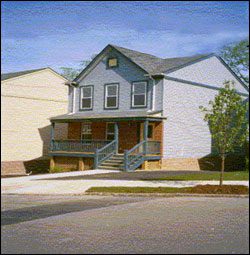 Whenever greeted with the question, “So what do you do?” I often need a minute to rack my brain for a response in layman’s terms. I work for a coalition of community-based and community-development agencies that in turn work for economic justice, equitable investment practices, and sufficient financial resources to revitalize communities. I go to school for “urban studies” with a concentration in “policy and management.” How do I explain something so technical and wonk-ish to John and Jane Q. Public?

I usually tell folks I work for a neighborhood revitalization agency. “Which neighborhood?” is usually the next question, and then I try to explain multi-neighborhood coalition-based advocacy. Occasionally I am successful.

“You do community organizing?” At this point, local political buffs will usually mention ACORN, and my response is that community organizing is a part of it, and working with the private sector and different governments to align disparate stakeholders and shape equitable, community-driven policy is also part of it.

“You work for the city?” No, but I work with the city. I actually work for a 501©3 nonprofit, which in part is funded by the Federal government via HUD via the city, and by foundations, and by banks, and by individuals.

Meanwhile, the rest of my organization’s members are community-based agencies that focus more on providing a framework for participatory democracy and collective advocacy on the part of neighborhood residents. While most of the brick-and-mortar groups have “development” in their names, the rest call themselves “citizens councils,” “concerned citizens corporations,” and the like.

A process of developing or building up communities of men and women to enable empowerment, self-sufficiency and control over their environment…entails a variety of activities done within or on behalf of a community to add to or enhance it in some way. …

We work for CDCs, CBOs, local governments, state governments, regional governments, county governments, foundations, banks, colleges and universities, chambers of commerce, and others. We invest in places, things, regions, and people. We leverage outside resources and try to bolster communities’ own resources. So how do we bring all these disparate processes together? What exactly is it that we’re all doing?

The idea I’ve settled on, as much as it lacks specificity, is engaging in the creation of “communities of choice.” That is, places that are livable and equitable — safe, convenient to amenities such as goods, services, and schools, affordable to low-income residents and attractive to high-income residents, and incorporate diversity of not only income but also race, religion, and every other status (federally protected or not). And to me, creation of these places entails providing neighbors with the tools to create these kinds of places themselves.

But, keeping in the spirit of community development itself, this definition should be guided by neighbors and professionals themselves, and not dictated by others. And it behooves us to come up with a common language for talking about what we do, lest community development continue to be an exotic and oft-overlooked aspect of the social justice movement.

How do you talk about what you do?