When the last light in her hallway at the Juanita Apartments in Burien, a working-class city just south of Seattle, burned out in January 2004, Octavia McGhee decided she’d had enough. She called city code enforcement and complained that her landlord’s neglect had left her family and her neighbors with a pitch-black and dangerous approach to their homes.

The building already had a long list of code violations, and McGhee’s call was the last straw – the city shut it down.

This was hardly the first case of rampant code violations by a landlord. Four years earlier, residents of the Forest Glen Apartments in Olympia, the state capital, received a wave of publicity after they called the Thurston County Tenants Union with complaints of toxic mold, caving-in ceilings and second-story doors that opened to 15 foot drops. In these and other cases, local governments were left with a difficult choice: shut down the housing and force tenants out of their homes, or allow slumlords to do business in their cities without consequence.

Responding to stories like those of the Juanita and the Forest Glen Apartments – and three years of determined tenant organizing – the Washington state legislature in April 2005 approved a bill that provides relocation assistance for tenants forced out of their homes because of their landlord’s negligence. This ensures that landlords, rather than renters and city governments, are accountable for paying the bill.

In the wake of the publicity surrounding the Forest Glen Apartments, a state legislator from Olympia introduced the first version of the tenant relocation assistance bill, which did not make it out of committee. Then, in 2004, the Tenants Union of Washington State (TU) saw a strategic opportunity to leverage the publicity surrounding the Juanita Apartments to get relocation assistance passed. The group formed a coalition with Columbia Legal Services, the Washington Low Income Housing Alliance and the Thurston County Tenants Union to use their complementary strengths to write strong legislation and build support among elected officials. Despite serious opposition from landlord lobby groups, the coalition mounted a powerful and effective campaign.

One of the fundamental strengths of the campaign was that many different parties were invested in getting the bill passed, including tenants who faced displacement, state legislators who sponsored the bill and elected officials from cities that have struggled with slumlords. The various strengths of these groups were coordinated in a coalition and the result was a smart, unified and effective campaign.

Strategic Framing of the Bill

The lead organizations in the campaign framed the debate around the legislation carefully. Lobbyists, tenants and elected officials told lawmakers repeatedly that the bill would only apply to slumlords who refused to make repairs after multiple notices of code violations. Several displaced tenants testified and painted vivid pictures of their housing conditions. This approach resonated with elected officials, and pushed the landlord opposition into a dark corner.

At the Housing Committee hearing on the bill, Rep. Mark Miloscia, the committee chair, interrupted a lobbyist’s testimony to ask if any of the landlords that she represented had their properties condemned or shut down – in effect asking her if she was there to represent the slumlords that the bill targets. Of course, her answer was no. But later, a landlord representing the same group actually did admit that some of her properties had been condemned! The landlords’ lobbyists were fighting to protect the rights of slumlords – and every public statement by the bill’s supporters drove that point home.

Grassroots support for the bill was fueled by organizing in apartment buildings where unsafe conditions motivated tenant leaders to learn about their rights and defend them. In the case of the Juanita Apartments, tenants were living with more than 150 documented housing code violations. Tenants knew their housing wasn’t safe, but they stayed because they didn’t have the money to move.

The Tenants Union of Washington State went door to door to give tenants information on their rights. Eventually, TU organizers developed strong relationships with tenant leaders who worked with the group to ensure that the media followed the story closely. Tenant leaders learned to give key messages to the media through their testimony, and helped to plan direct actions at the landlord’s home. Articulate leaders and compelling actions kept the media on the story for days. This intentional use of the media also worked to show the tenants were strong and organized, not poor victims.

Spurred by the organizing and publicity work, when the city of Burien finally shut the building down, it also took the unprecedented step of allocating $70,000 in emergency relocation funds to the families. The landlord, on the other hand, did not pay back one tenant any of their prepaid rent or deposits, or provide compensation for their suffering. The only thing that prevented many of these 70 families from becoming homeless was the city’s emergency funds.

Leaders from the Juanita, Forest Glen and several other apartment buildings came to the state capitol to share their stories and to ensure that elected officials did not forget the images the media brought to them. Tenants’ testimony worked to dispel the classist stereotypes that paint people who live in such deplorable conditions as somehow responsible. Their testimony also educated legislators on what it means to be on a fixed income and to be unable to afford a decent place to live. Together, the testimony and media attention reinforced each other, creating compelling stories to support the need for relocation assistance. Two of the senators who sponsored the legislation specifically credited the media images as being key in their decision.

What does this mean for Washington tenants?

The new relocation law was signed by Gov. Christine Gregoire and went into effect in July. Landlords are now required to pay $2,000 or three times the monthly rent (whichever is greater) to families forced to move when their housing is condemned or otherwise shut down. If the landlord refuses to pay, the city or local jurisdiction can step in to do so and then collect the money from the landlord with interest and penalties. The law also requires that the landlord pay back any prepaid rent and all of the tenants’ deposits.

These relocation payments will prevent homelessness when buildings get shut down, and the threat of such a large payment will be an incentive to negligent landlords to comply with code violation notices. It may also encourage tenants to call their local code enforcement agencies to make complaints about the condition of their buildings. Without the safety net of relocation assistance, tenants had to balance the loss of their homes with the continued negligence of their landlord when they made the decision to call. Perhaps most importantly, tenants of the Forest Glen and Juanita Apartments took the great injustice of their slumlords’ neglect and turned it into a victory for all of Washington’s tenants. 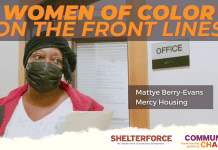 Mattye Berry-Evans, a Member of the Resident Action Network