If designed properly, inclusionary housing can also be a tool to combat exclusionary zoning and promote racial equity in housing. Scholars like Natalie Moore and Richard Rothstein detail how neighborhood disinvestment and housing disparities are the direct result of federal, state, and local race-based policies. Exclusionary zoning, racially restrictive covenants, and redlining all deprived households of color of equal access to neighborhoods of their choice and of wealth-building through traditional homeownership. The first inclusionary policies were explicitly intended to reduce racial and economic segregation at the neighborhood level.

However, racial equity is not the only reason cities and counties may adopt inclusionary housing policies. Some use it as simply another tool to create more affordable housing. Others use it to promote mixed-income neighborhoods. Some communities see inclusionary housing as a way to reduce the risk of gentrification and displacement linked to market-rate development. And other programs are created primarily to incentivize new development, with the inclusion of affordable units as a side benefit.

Policymakers and advocates want to make sure they are focusing their limited resources and energy on effective affordable housing strategies. This article uses nationwide data to answer key questions about inclusionary housing productivity and program design.

Is Inclusionary Housing a Useful Tool in My State?

In a few states, such as Arizona, mandatory inclusionary housing is explicitly preempted, or prohibited, by state law. In those states, inclusionary housing programs must be completely incentive-based, often described as voluntary. Later in this piece, we discuss ways to make voluntary programs more productive but, unfortunately, they are often weak and don’t create many units. Thus, for small or soft-market municipalities within states that have a strong preemption law, inclusionary housing is unlikely to be an effective tool for increasing affordable housing or advancing racial equity.

A few states—primarily Massachusetts, New Jersey, and California—have highly supportive state legislative frameworks. That has led to many more local inclusionary housing programs; nearly three-quarters of all programs in the country are found in those three states. Advocates in states without such supportive legislation could seek state-level action to encourage local inclusionary housing programs.

If state law permits, programs should apply inclusionary requirements to both rental and for-sale housing. All but one of the 20 most productive municipal programs in the United States apply to both rental and for-sale development (the exception is Atlanta’s program, which currently applies only to rental housing.) Counterintuitively, our survey found that supportive state legislation does not necessarily guarantee stronger or more productive programs. In fact, municipal programs in states other than Massachusetts, New Jersey, and California produce more affordable units (on average) than programs in those three states. Perhaps within those three states some programs are adopted perfunctorily, thus lacking “teeth” or the political will needed for success.

Proponents of inclusionary housing in traditionally conservative states should note: On a few occasions local policy adoption led to a backlash at the state level. After Nashville adopted its inclusionary housing policy, the Tennessee state legislature voted to completely preempt local inclusionary policies. In some states, such as Louisiana, local advocates successfully blocked state preemption efforts, but communities should consider whether there might be a backlash catalyzed by your local policy adoption.

For more information about legislation and judicial decisions in your state, please refer to the newly updated Inclusionary Housing Map.

Is Inclusionary Housing a Good Tool for My City?

Grounded Solutions identified a total of 1,019 inclusionary programs in 734 jurisdictions in the study, from large cities like Seattle to small towns like Park City, Utah. While programs exist in housing markets as varied as New York City, Austin, Atlanta, and Detroit, inclusionary housing tends to produce the most units in places that have mid-to-high levels of development activity and relatively high housing costs. Communities should pursue inclusionary housing if they currently have a lot of development, or anticipate significant development in the coming years, and they want to ensure future development is inclusive.

Will Inclusionary Housing Create a Meaningful Number of Affordable Units?

The way you design your program can make a difference in how many units it produces. While the average production rate across all programs is 27 units per year, excluding programs that have produced zero units, average production rate for the country’s top 20 programs is 235 units per year—almost 10 times greater. The most productive programs share certain features:  they are mandatory, offer incentives, allow developers flexibility with multiple options for compliance, and require long-term affordability.

The most productive voluntary programs rely on providing benefits that are extremely desirable or financially necessary. New York’s Affordable New York program, formerly known as the 421a exemption, and Seattle’s Multi-Family Tax Exemption program provide lucrative tax benefits in exchange for the inclusion of affordable units. While these programs are effective at creating affordable units, they have the obvious downside of a loss of revenue for the jurisdiction.

In Boston and Chicago, any project that seeks a zoning variance must provide affordable units; the current zoning in those cities is such that virtually every project needs at least one zoning variance to proceed. Some programs stack multiple benefits to entice participation; Atlanta’s inclusionary zoning ordinance allows developers to select up to three incentives, including increased density, reduced parking requirements, transfer of development rights, priority review, and other expedited processing.

Increasing density, reducing parking requirements, and waiving other zoning limitations (e.g., setback requirements) are often seen as urban planning “best practices” on their own—especially for areas near transit. However, if communities provide high-value benefits without capturing some of the value of those benefits in the form of affordable units, the result will be high-cost land and high-end development. Linking affordability requirements to the provision of valuable benefits is particularly essential in communities where mandatory inclusionary housing is preempted.

How Much Affordable Housing Should New Development Provide?

Inclusionary housing programs typically require a specific percentage of the housing units in a development to be priced affordably. 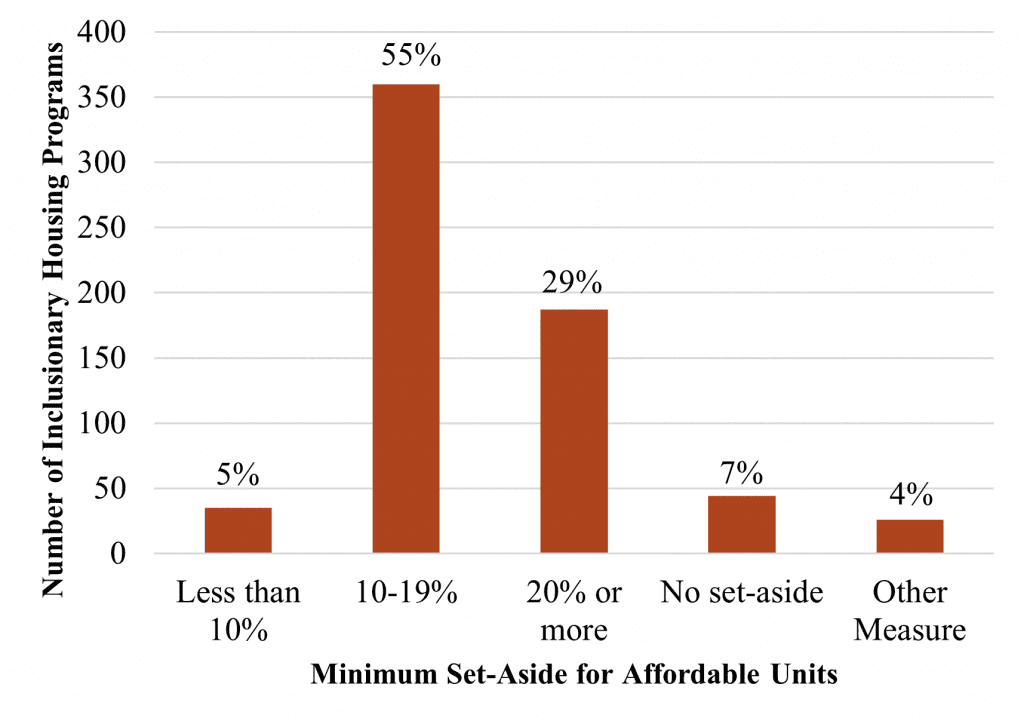 The average minimum set-aside for affordable units is 16 percent. Interestingly, the top-producing programs don’t differ significantly from the broader pool of programs with respect to set-aside. While the set-aside is important, it appears possible to have a high-producing program without a super-high set-aside.

What Income-Level Households Should the Affordable Units Serve?

Cities require units created through inclusionary housing programs to be sold or rented at “affordable” prices, but affordable to whom? Income targets and pricing are generally defined in terms of percentage of area median income (AMI), and the majority of programs set the maximum income of eligible households between 51 percent and 80 percent of AMI. 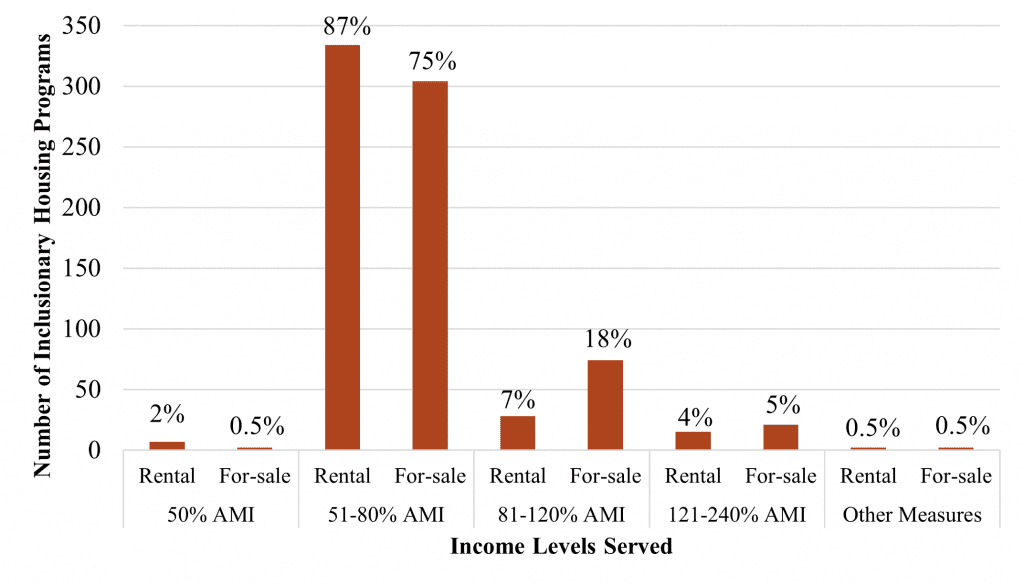 Note: The percentages reference the total number of inclusionary housing programs by tenure of development. For example, 75 percent of for-sale programs serve households earning 51 to 80 percent of AMI.

We often get asked whether inclusionary housing can serve households below 50 percent of AMI. The answer is yes. Since the financial impact of serving lower-income households is greater, the jurisdiction will need to reduce the set-aside and/or add financial incentives to achieve deep affordability.

Another creative approach is to require inclusionary units to accept Section 8 Housing Choice Vouchers, as Minneapolis does. This can be a win-win for the community and property owners, since owners can receive fair market rent for units rented to voucher holders, and fair market rent may be higher than the maximum rent permitted under the inclusionary housing policy.

For How Long Should Affordable Units Remain Affordable?

Communities should set the affordability term as long as is legally permitted to ensure that affordable housing stock grows over time. In Maryland, Montgomery County’s Moderately Priced Dwelling Unit program produced over 14,000 affordable units between 1974 and 2014. However, the initial units only had to remain affordable for 5 or 10 years. As a result, 9,600 units have returned to market rate. In 2004, the county increased the term of affordability to 30 years for ownership units and 99 years for rentals.

Should Programs Provide Incentives to Developers?

Many programs offer incentives to developers to offset the cost of providing affordable housing units. The most commonly offered incentive is a density bonus, followed by other zoning variances like reduction in parking requirements. Notably, 29 percent of programs do not offer any incentives. However, all but two of the most productive programs offer at least one incentive.

Offering incentives can enable communities to have a higher affordable housing set-aside and/or lower income level targeting while ensuring that market-rate development remains profitable. Communities should aim to use planning incentives like density bonuses and parking reductions whenever possible, since they are less costly than direct financial incentives such as reduced fees, tax abatement, or other subsidies. 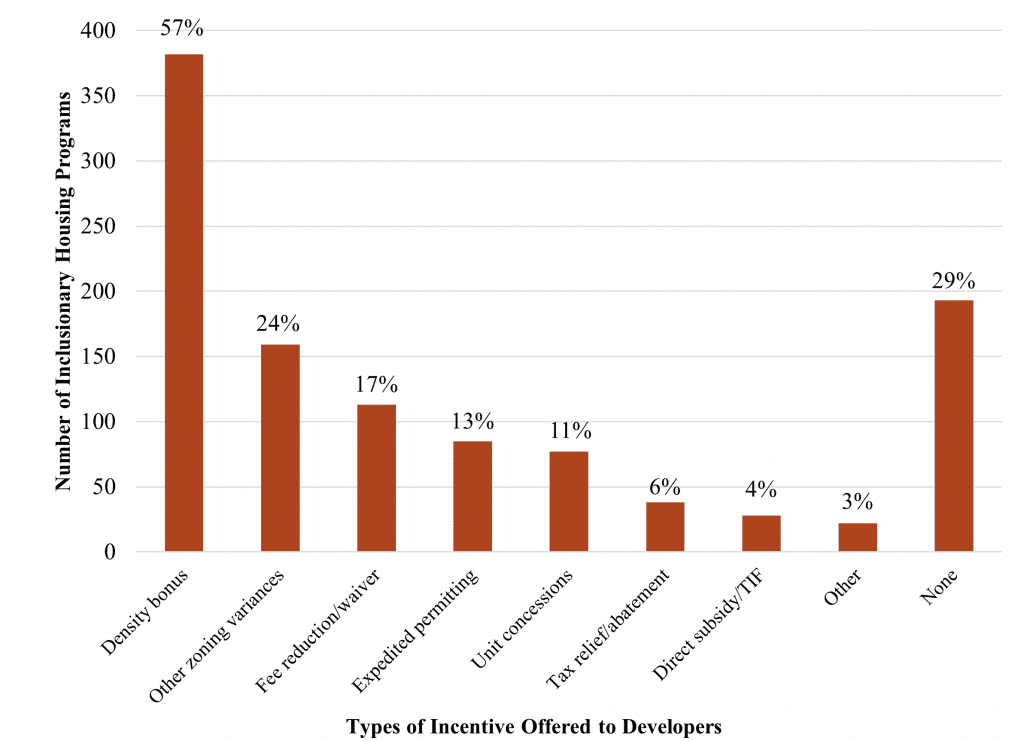 The majority of inclusionary housing programs offer developers options other than providing the affordable units on-site (e.g., building affordable units off-site or paying a fee in lieu of constructing units), but this is often a controversial decision. 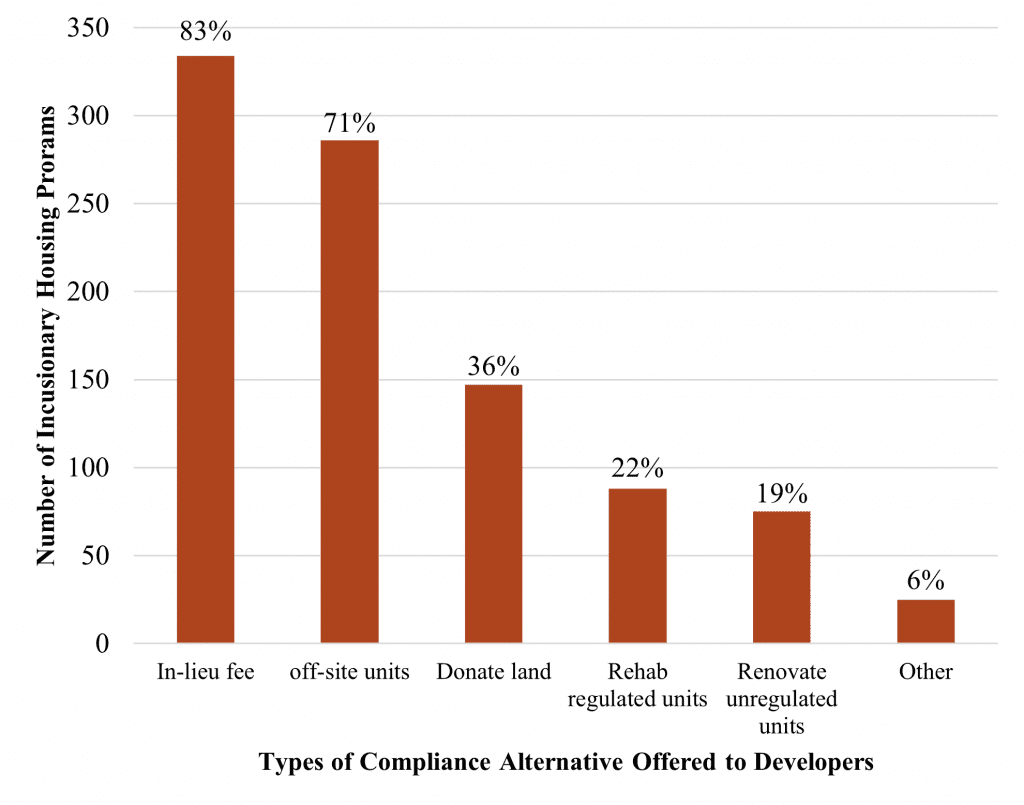 People who oppose compliance alternatives often worry that fees or off-site units will provide less value to the community than on-site mixed-income development. This is a risk; in fact, many communities have a history of setting in-lieu fees too low. However, alternative compliance options can be mutually beneficial when correctly designed. Seventy percent of the top-producing programs offer at least one compliance alternative.

In terms of achieving racial equity goals, on-site development is the most straightforward way to ensure that affordable units are built in high-opportunity neighborhoods from which people of color have been historically excluded. However, alternative compliance (e.g., collecting fees and using those fees to support nonprofit affordable housing projects) can help build and/or preserve affordable housing in historic neighborhoods of color that are on the cusp of being gentrified, and can sometimes yield more total affordable units.

In summary, there is no one right answer to the question of whether to allow alternatives like in-lieu fees and offsite construction—the correct choice will depend upon your local government’s ability to quantify and enforce rational, meaningful alternatives.

How Can I Ensure My Inclusionary Housing Program Advances Racial Equity?

The topic of how best to embed racial equity in inclusionary housing programs is addressed in two pieces co-authored by Grounded Solutions Network and the National Initiative on Mixed-Income Communities: Advancing Racial Equity in Housing and Community Development: An Anti-Racism Resource Guide for Transformative Change and Advancing Racial Equity in Inclusionary Housing Programs: A Resource Guide for Policy and Practice. Stay tuned for a Shelterforce article on this topic.