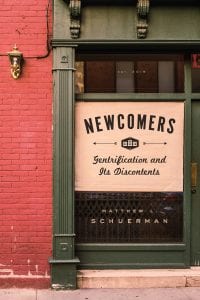 Writers are always told that first and foremost, they should tell a story. I buy that. Stories are a great starting point into an issue. But storytelling, when taken too literally, has its limits. Stories can be used to foster insight into an issue, but they can also generate an emotional response that can not only fail to clarify the issue but obscure its nuances and complexities. Much as I like a good story, that is this book’s fatal flaw.

In Newcomers: Gentrification and Its Discontents, author Matthew Schuerman has chosen to depict gentrification as an ongoing struggle since the 1950s through a series of stories, each one focusing on an individual who is, in classic storytelling tradition, portrayed as either brave, intrepid, or bravely struggling against odds. He is a good reporter, and while many of his stories are gripping, and some are moving, he fails to turn them into a coherent picture of anything larger than themselves. In the end, the reader has no clear idea of the extent of gentrification, the larger forces driving it, and its impacts—other than in a handful of cases which may or may not be representative of anything—or above all, how gentrification fits into the larger process of the rise and fall of neighborhoods, all subjects the author never grapples with.

This is particularly apparent in his treatment of the 1970s, an era when Schuerman seems to believe gentrification was rampant across the country, and when in his view federal and local public officials were dangerously remiss in not having taken aggressive action to nip it, as it were, in the bud. What he doesn’t seem to appreciate is that gentrification in the 1970s was a minute phenomenon hyped out of proportion by the media. American cities—including New York—were hemorrhaging people, jobs, and tax revenues; thousands upon thousands of properties were being abandoned, and far more neighborhoods were falling apart than gentrifying. Gentrification was not a priority for activists like Gale Cincotta or Dorothy Richardson, for good reason.

In that free fall era, gentrification was a sideshow. Schuerman talks about the flurry of activity at HUD in the late 1970s on this issue, but at the time, HUD–under the Carter administration–after noting many news reports about well-off people fixing up buildings in old neighborhoods, concluded, correctly in my opinion, that the “population and economic trends” represented by such efforts “are far too small to slow significantly or to reverse the movement to the suburbs and the loss of economic activity by central cities.” Ironically, one figure from that era whom the author treats less than sympathetically, former New York mayor Ed Koch, probably did more to address issues of displacement and affordable housing than anyone else at the time, or arguably since.

What little gentrification took place during the 1970s largely stalled during the 1980s and 1990s—except perhaps in New York City and San Francisco. Schuerman fails to address the reality that many neighborhoods across the country that had been proclaimed in the media as gentrifying in the 1970s reversed course, often abruptly, in the 1980s. Committed to his chronological approach, he fills the gap between the 1970s and 2000 partly with a chapter on San Francisco’s Mission District, and partly with chapters on rent control and Chicago’s public housing Plan for Transformation, neither of which he links convincingly to the subject of gentrification.

Unfortunately, by focusing on New York City and San Francisco, two cities with all but unique demand pressures and supply constraints, Schuerman misses what is arguably the big story about gentrification post-2000, which is not about Google buses in San Francisco or evil landlords in New York, but is about the extent to which it has become a significant issue, although admittedly often exaggerated or misrepresented, in city after city across the country, including Denver, Philadelphia, Pittsburgh, Raleigh and a host of others. It is the big story not least because it dominates the discussion of neighborhood change across the country, but also because it reflects major demographic changes and shifts in the nation’s economy, which are worlds away from the financial sector driving New York or the tech sector driving San Francisco.

The pity is this could have been a much better book. The author has done a lot of homework. He’s interviewed a lot of people, read a lot of reports, and every so often demonstrates that he actually understands quite a bit about the larger issues behind the stories he tells. He’s properly skeptical about the currently popular notion that if we just build more market-rate housing, we’ll solve the problem. He’s looked at some of the academic literature and gets the fact that Neil Smith’s famous “rent gap” explanation for gentrification makes little sense, although it’s not clear he understands why. But he never digs into any of the issues he touches on. Instead, he skates on the surface, even in his conclusions, when he mentions a bunch of ideas without looking closely at any of them, and whether they would in fact have any impact on any of the issues that seem to be present in the stories he’s told.

Gentrification is complicated. It is an economic issue, but it is far more than that. It is not really about good guys or bad guys, but about the intersection of a host of social, political, and economic issues in contemporary America, and ultimately about the lack of power that most poor communities and communities of color have to control their destinies. The book about gentrification that captures the complexity of the subject remains to be written.