Quote of the Week

“M-Pesa brought an estimated 2 percent of Kenyan households out of extreme poverty. On the one hand, it’s impressive that a simple mobile money product can contribute to alleviating poverty at all. On the other hand, compared with other types of interventions for the poor, such as bed nets and vaccinations, one can’t help thinking: Seriously, that’s the best we’ve got?” —From the Stanford Social Innovation Review’s “Do Financial Inclusion Efforts Really Have an Impact on Poverty?”

Even though he dismissed reports that his family was involved in any HUD-related business, we know that’s not the truth. In a memo obtained by the Washington Post, we learn that HUD Secretary Ben Carson was warned about using his position for private gain. The warning, issued by HUD’s deputy general counsel, stems from a listening tour held last summer that was organized by Caron’s son. We know we shouldn’t be surprised, but we should still hold him accountable.

From the “you don’t say” files: New research shows that as housing costs outpace wage gains, households are needing to stay in HUD-assisted housing longer. So if Secretary Carson really cared about helping people move out of assisted housing, he should have fought against the lowering of the corporate tax rate, which is already weakening the low-income housing tax credit, instead of planning questionably helpful self-sufficiency-focused “Envision Centers.” 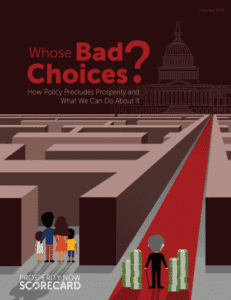 Despite increasing news reports about Americans working multiple, lower-paying jobs and longer hours just to (barely) afford housing and food, the narrative of hard work equaling economic success still persists (the Trump administration’s announcement last month on Medicaid work requirements is indicative of this). The data in Prosperity Now’s 2018 Scorecard challenges that narrative, breaking down household financial health by state, outlining wealth disparities and their causes, and making remedial policy recommendations. Policy matters, as does language, and we are grateful for more tools in the toolkit to fight this narrative war.

Reading this story is like a punch in the gut. Up until the new administration took office a little more than a year ago, it seemed as if the big bad payday lending intuitions were going down. Annual payday revenue was decreasing and payday loan stores were closing up shop. But a year is all it takes to destroy progress. With payday lobbyists contributing more than $13 million to Republican members of Congress since 2010, according to The New York Times, it’s no surprise that payday rules have relaxed in the last year.

We love hearing about strong community benefits agreements, and these residents of a long-overlooked community in Southwest Detroit seem to be firmly on the road to getting what they need. With the impending construction of a new bridge connecting Michigan and Canada, residents of the community of Delray were looking at increased air and noise pollution and traffic congestion—adding to their existing environmental stressors of an oil refinery and wastewater plant in town. With the help and work of The Southwest Detroit Community Benefits Coalition, Delray residents, who have among the highest asthma rates in the country, will have the opportunity to either move in a land bank swap or receive funds to improve their homes’ indoor air quality and noise protection. The agreement also stipulates local, minority hire, and will fund a health impact study.

We’ve written about Airbnb affecting the housing market before (and we’ve called them to task to test their hosts for bias), but this story made us do a double take. In New York City, somewhere between 7,000 and 13,500 units of housing has been lost thanks to Airbnb rentals. That’s not all. Airbnb’s presence has also caused an increase in median rent in the city by $380, according to a recent study. We don’t see this getting better before it gets worse.

Credit is due to the Chicago Housing Authority (CHA), which after four years has done so well in its HUD Section 3 voluntary compliance agreement (VCA) that the department has waived its fifth and final year. A little known law, Section 3 was created as part of the Civil Rights Act, and along with providing funding for training and business development services, requires that companies contracted to work with the Department of Housing and Urban Development give hiring preference to housing authority residents. Back in 2011, residents filed a complaint against CHA for not awarding any Section 3 contracts over a two-year period, and a HUD investigation found noncompliance. Since January 2014, when CHA began tracking Section 3 internal hires as part of its VCA, 40 percent of its’ internal hires have been Section 3 residents. CHA also began using the Job Order Contracting (JOC) Program in 2016, helping over 100 Section 3 business owners perform as prime contractors on over 900 contracts valued at over $50 million, enabling them to build capacity and grow their businesses.

There’s finally a little good news for Puerto Rico. Months after hurricanes Irma and Maria devastated the island, HUD announced it would award $1.5 billion in grants to help the U.S. territory recover.  When the president made disparaging remarks about the Caribbean island after the storms last year, it didn’t seem like the administration would be willing to lend any kind of assistance, let along a billion dollars in grants. But it’s badly needed. Millions of Puerto Ricans are at risk of water contamination, 15 percent are still without power, and thousands of homes are without roofs, leading to displacement. Also, the island is bracing for a massive foreclosure crisis as one-third of Puerto Rico’s homeowners are behind on their mortgage payments. This money will help, but it’s nowhere what Puerto Rico needs to get back on its feet. We’ll be closely following this ongoing story.

We’ve got mixed feelings about the Community Finance Challenge. On the one hand, new ideas are often helpful, and getting a wider range of people, including business students, to consider community finance to be an area to think about and possibly pursue a career in is splendid. On the other hand, though, are MBAs who don’t necessarily have experience with the needs of the communities and borrowers (or nonprofits) the right people to be taking the lead on re-envisioning community finance? Since every team has to include an MBA student, perhaps next time every team should also have to include a community member?

When we interviewed Wayne Meyer of New Jersey Community Capital back in 2015 about its ReStart program, which involves buying distressed loans from entities like Fannie Mae and FHA and modifying them to keep people in their homes, it was surprising that the New Jersey-based group had purchased some loans in Florida as well. Clearly the group has continued to develop its expertise in a way that is needed around the country: It just purchased a pool of 495 non-performing loans from Fannie Mae’s Community Impact Pool that includes loans in nine states. ReStart’s mortgage re-default rate is less than 2 percent, compared with an industry average of 30 percent. 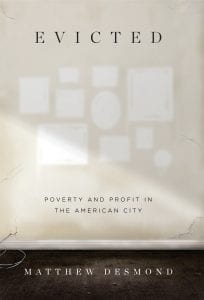 Cleveland is engaging in a community-wide read of Matthew Desmond’s Evicted. We expect the powerful book to move many people, but the interest in preventing eviction is coming too late for the Cleveland Tenants Organization, the only local group helping people facing eviction, which is shutting its doors for lack of funding support after more than four decades on February 15th, in the midst of the read. Philip D. Star, a CTO staff organizer and director from 1976 to 1987 and former director of the Center for Neighborhood Development at Cleveland State University, pointed out this painfully ironic timing, noting that “Legal Aid may provide some assistance in the future but there will no longer be an organized voice for tenants in Cleveland.” Where will the 10,000 tenants that call CTO annually turn to?