The title of this post proved itself to be true for us in Duluth, when local organizations got together to address the growing need for healthy food in our low-income neighborhoods. Over the last few years, a coalition known as Fair Food Access has worked closely with local residents, including having them survey their neighbors so we could understand their needs. We evaluated myriad options, from developing new grocery stores to opening community gardens to attracting farmers markets. And we began taking action on those in several communities—with impressive results.

If You Can’t Bring the Groceries to the People…

But, in the Lincoln Park neighborhood, with 6,000 residents just west of downtown, there was an underlying issue: residents were miles away from a full service grocery store, had no reasonable way to get to it and could not attract a new store to help fill the gap.
About 60 percent of Lincoln Park’s 2,800 households earn less than $35,000 per year; some 35 percent live below the poverty line. There are gas station convenience stores—and we’ve worked with them to add healthy food to their offerings—but the closest full-service grocery store is 3.5 miles away in West Duluth. Unfortunately, based on several retail studies, that wasn’t going to change anytime soon. Lincoln Park has neither the density nor the income levels to attract a new grocer to the area.

So, if we couldn’t bring a grocery store to Lincoln Park, maybe we could bring Lincoln Park across those 3.5 miles to the store. A few months ago, we launched a pilot program with the city transit agency to create what amounts to a neighborhood grocery run on Tuesdays—with a special route that picks people up near their homes and drops them off right at the front door of the Super One grocery on Bristol Street.

Why don’t existing Duluth Transit Authority (DTA) bus routes suffice? Basic logistics. Buses stop too far from the store; they aren’t designed to accommodate more groceries than one can rest on their lap; aisles need to be kept clear, so no full carts are allowed; they aren’t frequent enough for people to get back home easily; it’s difficult to manage kids and groceries on the regular bus—the list goes on.

As we looked at it more closely, we couldn’t help but think: are these really the things that are going to keep people from putting decent food on the table? With a little bit of planning and a little bit of money we should be able find answers. The DTA and Super One were eager to help us find them.

Thus was born the Grocery Express. It’s a city bus outfitted to cart both people and groceries, and it runs every Tuesday through Lincoln Park, West Duluth and then out to nearby Morgan Park, which faces some of the same challenges. The bus fare is $0.75-1.50 to ride (off peak versus peak), and we are now seeing about 90 people a week taking advantage of it. Ongoing expenses are minimal—primarily gas and the cost of a driver—both of which are being covered by seed grants during a pilot period that runs through December. We are hoping to expand in the months to come, not just to make the bus a permanent fixture but to expand routes and even help people get carts that make it easier to get their groceries home from the bus.

Yes, it’s simple. But it’s powerful. Not every program demands multiple layers of financing to get off the ground. Some just need a strong dose of common sense.

(Photo credit: Grocery bin on board the Grocery Express. Courtesy of Duluth LISC) 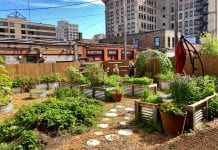