Last week, when a prominent and long-standing central New Jersey soup kitchen went to the newspapers as a last resort to inform the public that demand was up, donations were down, and that it would have to cut back on meals, the immediate response was overwhelming. Donations, totaling upwards of $7,000 poured in almost instantly, the full meal service was restored, and there was a happy ending just in time for the pre-Thanksgiving headlines. The support was touted as a “Thanksgiving Miracle.”

But what happens to places like Elijah’s Promise — that central Jersey soup kitchen — when it’s March, or August, or any other time when holiday spirit cannot be tapped? It’s just another characteristic of this New Economic Order. Americans are spending less, and have less disposable income. At the same time, not-for-profit organizations like Elijah’s Promise face the daunting challenge of carrying out their mission with fewer dollars and more demand.

Of course, it goes without saying that this is not an isolated incident. While foundation support for nonprofits has yet to take a major toll*, there is the looming threat of a sustained decline in charitable giving, putting the hurt on nonprofits everywhere.

Whereas not-for-profit services might decline with diminished funding, the demand for food banks increases in tough economic times. AP reports:

The Greater Chicago Food Depository, the city’s food bank, has seen a 33 percent increase in food pantry demand from July to September of 2008, compared to the same period last year, said spokesman Bob Dolgan. “Our network is strained right now,” Dolgan said. “Our most successful pantries … are having to turn people away.”

And to make matters even worse, those who were donors or volunteers at food banks in years past are now clients. Food, sadly, is one of the first “luxuries” to go — before gas and electricity, according to Paul Ash, the executive director of the San Francisco Food Bank, who appeared Wednesday on PBS’ NewsHour. Last year, his organization distributed more than 27 million pounds of food.

Well, it bites worst at the end of the pay period, so just depending on how someone is paid. We always see more people showing up to a pantry if the distribution is in the last few days of the month, or the, you know, 13th, 14th, 15th of the month, just before someone can expect their paycheck.

Food is the one thing that you can just parse out your dollars very, very slowly. And so that’s why you end up running out of food toward the end of the middle of the month.

The other penalty there is you don’t buy the giant economy size. You have to buy the small size, so your dollar doesn’t go as far. So there’s a lot of penalties to living paycheck-to-paycheck and trying to stretch your dollars out for food.

The food stamps program and other federal nutrition programs do not limit the number of participants, but those programs do not offer sufficient support to feed a family for a month. As a result, more strain is placed on food banks, which suffer from falling donations. 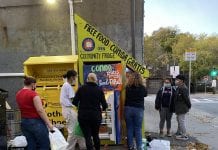