Meir Rinde - September 27, 2022
A Trump-era policy that actually helped poor people could be dismantled by the IRS.

Amy T. Khare and Mark L. Joseph - July 12, 2019
An introduction to a new series of essays on mixed income communities that will comprise the fifth volume in the San Francisco Fed's 'What Works' series.

“More Than the Sum of Our Property Values”

Gail Schechter - May 2, 2018
How can power over land be used in such a way that people who are at a political disadvantage—who are poor, members of racial, ethnic or religious minorities, very young or very old, or have a disability—benefit? How about those who cannot speak for themselves, like trees or rivers?

Annie Howard - April 18, 2018
An interview with Ryan Cooper, co-author of the report (with Peter Gowan), Social Housing in the United States, about current approaches to government intervention in the rental market, the politics of home ownership, why public housing needs to be mixed-income, and envisioning a society that provides adequate, affordable housing to all of its citizens.

Derek Hyra - May 4, 2016
In some newly created mixed-income, mixed-race communities, we are witnessing “diversity segregation,” where people of different backgrounds, races, ethnicities, and incomes live next to one another but not alongside one another.

Build Mixed-Income Housing–But Not in Isolation

Carol Naughton - May 4, 2016
A focus on housing connected to education and wellness will be needed to break the cycle of intergenerational poverty.

Alan Mallach - May 4, 2016
Building when you could buy is inefficient—and contributes to economic segregation.

David Holtzman - May 4, 2016
A single development with an intentional income mix involves very specific challenges—both in its design and its management.

Voices From the Field: Mixed Income

Shelterforce Staff - May 3, 2016
Do we need more mixed-income housing? Why or why not? The following data and observations were collected via a survey we conducted from late January through mid-February, distributed via Shelterforce Weekly and social media. 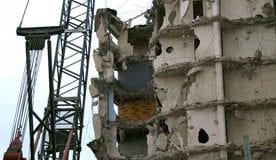 Tearing Down the Community