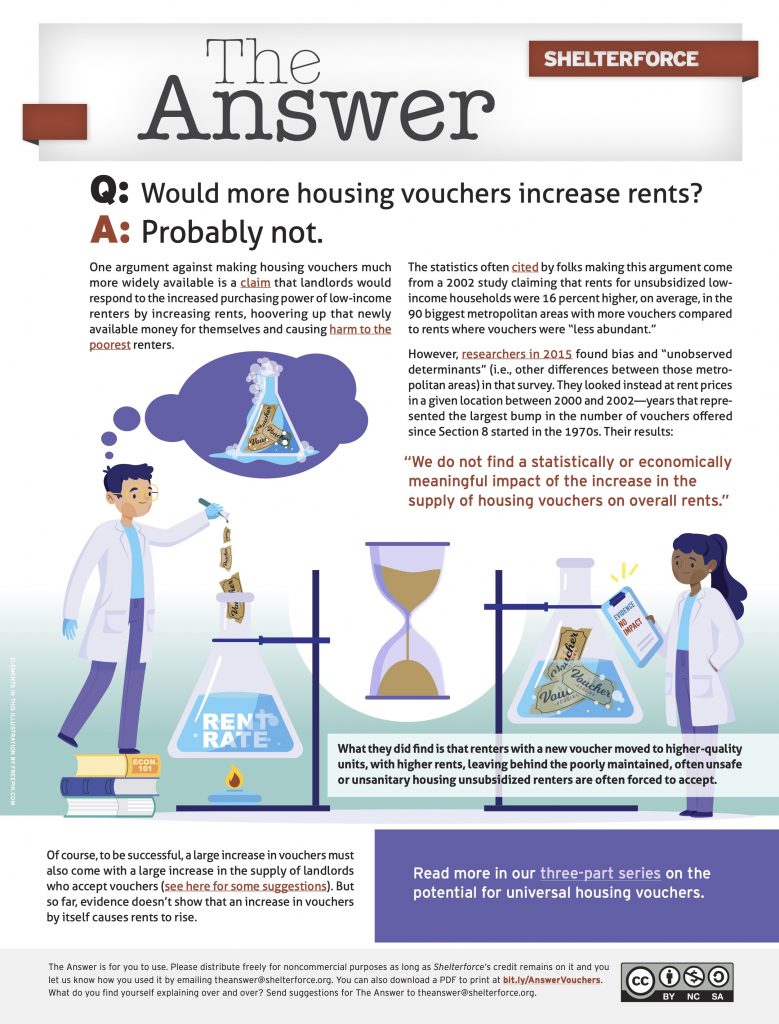 One argument against making housing vouchers much more widely available is a claim that landlords would respond to the increased purchasing power of low-income renters by increasing rents, hoovering up that newly available money for themselves and causing harm to the poorest renters.

The statistics often cited by folks making this argument come from a 2002 study claiming that rents for unsubsidized low- income households were 16 percent higher, on average, in the 90 biggest metropolitan areas with more vouchers compared to rents where vouchers were “less abundant.”

However, researchers in 2015 found bias and “unobserved determinants” (i.e., other differences between those metropolitan areas) in that survey. They looked instead at rent prices in a given location between 2000 and 2002—years that represented the largest bump in the number of vouchers offered since Section 8 started in the 1970s. Their results:

“We do not find a statistically or economically meaningful impact of the increase in the supply of housing vouchers on overall rents.”

What they did find is that renters with a new voucher moved to higher-quality units, with higher rents, leaving behind the poorly maintained, often unsafe or unsanitary housing unsubsidized renters are often forced to accept.

Read more in our three-part series on the potential for universal housing vouchers.

The Answer is for you to use. Please distribute freely for noncommercial purposes as long as Shelterforce’s credit remains on it and you let us know how you used it by emailing theanswer@shelterforce.org. You can also download a PDF to print at bit.ly/AnswerVouchers.

What do you find yourself explaining over and over? Send suggestions for The Answer to theanswer@shelterforce.org.