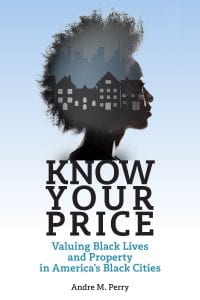 After years of presenting on racial economic inequality and the racial wealth divide, I have learned that it is essential to attack head-on the myths and false narratives that justify racial economic inequality before one can begin to approach solutions to this issue. One must face the underlying myth that the United States is the land of economic mobility and that there is a robust middle class that all have equal access to, if they are willing to put in the individual effort. Andre M. Perry’s Know Your Price: Valuing Black Lives and Property in America’s Black Cities reveals the web of historical and contemporary socioeconomic barriers that maintain the racial wealth divide and does this through personal narrative, history, and an exploration of a wide array of social issues.

Perry is known for his professional and academic credentials, including being a fellow at the Metropolitan Policy Program at Brookings and a scholar-in-residence at American University. Yet Perry clarifies that his personal life story is one of his most important credentials in analyzing Black asset poverty’s causes and barriers.

Perry’s introduction provides the most powerful summation of the arguments of the book. Through his story of being raised by a working-class matriarch in a declining middle-class Black city, Perry paints a portrait from which we can see the socioeconomic challenges individuals and households face and how these challenges are embedded in a racially discriminatory political economy. While acknowledging the ups and downs in his family’s life, Perry convincingly argues that personal failure within the Black community is not the cause of Black socioeconomic disenfranchisement. As Perry states, one major goal of this book is “to show that there is nothing wrong with Black people that ending racism can’t solve,” and this is where Know Your Price is most effective. One cannot read through the multitude of examples of the devaluation of Black life and property without gaining a clearer understanding of how deeply rooted devaluing is in our institutions and how it maintains the racial economic inequality upon which this country was founded.

The author’s exploration of urban development in cities across the country and of rebuilding the school system of New Orleans are potent examples of white institutional beneficence’s failure to value and improve Black lives and institutions. In the name of strengthening “inner city” areas where Black people were placed through redlining or were allowed to move into after white flight, “development” continues to either disperse Black populations or concentrate them further so that white capital can be invested in neighborhoods for white people. Similarly, Perry explores the rebuilding of schools in New Orleans after Hurricane Katrina in the chapter titled “The Apologies We Owe to Student and Teachers.” This chapter notes that a primary means of ‘strengthening’ this predominantly Black school district was to fire Black teachers and administrators en masse while at the same time using white institutions and organizations to rebuild the New Orleans school district. Perry notes that the lack of value given to Black school employees as professionals and as Black community members continues the cycle of socioeconomic disenfranchisement. “Improving conditions for students starts with improving the conditions of the people closest to them. We can’t improve schools despite the community.”

Know Your Price ambitiously attempts to not only highlight the intersectional history of Black socioeconomic disenfranchisement but also outline solutions, though this is where the book is less successful. Bold policy ideas and national policy prescriptions are weaved throughout the book but are too easily lost in the narrative and historical accounting of racial inequality.

As he identifies the racial wealth divide as the foundation to many of the social issues the book explores, Perry also highlights some of the most discussed national policy solutions, including reparations, baby bonds, and greater diversity in the hiring of professionals who design and implement city services. There is also an advocacy for small-dollar mortgage products, tax credits, and microloans aimed at low-to moderate-income African Americans. Finally, there are important critiques, such as of the increasingly discussed idea to target formerly redlined areas to address African Americans’ socioeconomic disenfranchisement despite the fact that many of these areas are predominantly white and Latino today.

Know Your Price: Valuing Black Lives and Property in America’s Black Cities struggles between a liberal optimism and Afro-Pessimism. As the subtitle indicates, Perry sees Black cities as a foundational asset to strengthen and develop African-American economic sustainability. Yet the book also documents how most Black cities today derive from segregationist policies, white flight, and disinvestment. It is not clear how Black cities that emerge from white supremacist segregation of capital and economic opportunity will become the vehicle for Black economic empowerment. There are convincing arguments about the ongoing growth of the number of Black cities and declarations that “chocolate cities can’t be erased because our brilliant culture won’t allow it.” Still, it is documented how cities like Pittsburgh and other formerly primarily Black cities have, at the center of their “development,” the erasure of Black neighborhoods, culture, and people, all to attract white capital.

Perry is clear that a robust federal investment is needed to strengthen Black cities, similar to how federal investments like the GI Bill and the New Deal were at the root of the growth for so many white cities, creating the white American middle class. Perry also boldly recognizes that a majority-white Senate and white legislators at the federal level will not likely make the type of investments necessary for Black cities. The primary answer to this dilemma is Chapter 7, “For the Sake of America, Elect a Black Woman President,” which argues for more Black women in federal elected positions. Without providing any data, Perry argues that Black women are more effective at bringing together a multiracial coalition behind an agenda that addresses Black disenfranchisement. Perry writes, “Black women’s experiences are relatable to different classes and racial groups.” Yet the overwhelming majority of Black women elected officials mentioned are women from majority Black or majority people-of-color districts. Thus, there is no strong argument that Black women elected officials will be able to overcome the majority of whites’ refusal to value and/or invest in Black people or Black cities.

Know Your Price: Valuing Black Lives and Property in America’s Black Cities is another important contribution to the contemporary challenge to the lack of will to address Black socioeconomic disenfranchisement along the lines of The Color of Money: Black Banks and the Racial Wealth Gap and Race for Profits: How Banks and the Real Estate Industry Undermined Black Homeownership. “Know Your Price” explains Black wealth poverty as the foundation of inequality and focuses on building off of the assets in the Black community as the best means to build Black wealth. This work distinguishes that inequality does not stem from failures of the disenfranchised but the refusal by society at large to value and invest in them. Its assessments that “Black communities need research that highlights assets worth building on” and that “we need the tools, analytics, and frameworks to properly assess the cities, neighborhoods, and people others devalue,” aim us in the right direction to bridge the racial wealth divide. However, we are still in need of strategies based on evidence to move Black America, its cities, and its people forward, while white capital and its legislators refuse to provide their needed support.