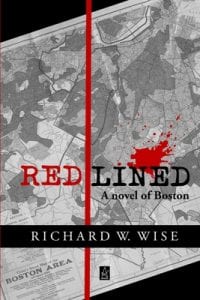 An organizer, eager to discover who is responsible for the destruction of her Boston neighborhood of Jamaica Plain, stakes out a vacant building that arsonists are expected to hit. Shortly after 2 a.m., a car stops and its passengers enter the structure. Minutes later they return to the vehicle and speed off into the night. Curious as to what took place inside the building, community organizer Sandy Morgan enters one of its open apartments. Within moments, the arsonists’ timer triggers a violent blast that hurls her body against a brick wall, killing her instantly.

With a deep understanding that’s largely based upon his experience working as a community organizer in Boston’s Jamaica Plain neighborhood, Richard W. Wise tells a powerful story of the urban development wars that took place at a time when powerful developers, financiers, politicians, and nonprofit leaders promoting upscale place-making in pursuit of “trickle-down benefits” were pitted against poor and working-class residents struggling to preserve their neighborhoods. In the first few pages of Redlined: A Novel of Boston, Wise seizes the attention of readers eager to know who caused Sandy Morgan’s death. He then quickly exposes them to an epic battle over the future of American cities being waged in low-income communities throughout the U.S. during the last quarter of the 20th century. This semi-autobiographical novel describes how a small group of community activists, working through their churches, compelled the Commonwealth of Massachusetts to require banks to disclose where they were making loans. The clear pattern of discrimination revealed by the data subsequently helps this network of faith-based organizations negotiate a major reinvestment agreement with local lenders.

The book is set in the early 1970s when state and federal transportation officials proposed the construction of a new highway to ease the commute of South Shore residents traveling into downtown Boston. During the land acquisition phase of the Southwest Expressway Project, which featured the widespread use of eminent domain, an unlikely coalition of neighborhood activists, historic preservationists, urban environmentalists, and mass transit advocates came together to defeat the initiative, placing the future of the neighborhoods located along its right-of-way up for grabs. Wise focuses Redlined on the fierce struggle that took place over Jamaica Plain’s redevelopment. Here, a large number of vacant lots and abandoned buildings remained following the cancellation of the highway project, which discouraged local lenders from providing mortgages in the area, in turn causing real estate values to plummet and many property owners to abandon the community.

In Redlined, powerful real estate interests with extensive financial and political ties quietly assemble land within Jamaica Plain for a mega-project, using campaign donations, charitable gifts, and illegal bribes to secure the support of local officials—and threats of violence and arson to encourage residents to abandon the neighborhood. Early in the story, readers are introduced to a determined group of citizens who mobilize to challenge these efforts. Along the way, Wise exposes readers to municipal officials committed to the machine politics of the James Michael Curley era, religious leaders more interested in their Swiss bank accounts than in saving souls, and Vietnam vets willing to operate outside of the law to defend their neighborhood. While some readers may find Wise’s characters and rapidly changing subplots challenging to follow, few readers familiar with the rough and tumble nature of urban development in Boston and its tribal-like municipal politics will be among them.

Redlined: A Novel of Boston would be a great addition to the summer reading list of anyone interested in Boston’s social history or the struggles of citizen organizations resisting displacement and gentrification—problems that have gotten significantly worse in recent years despite the passage of the Fair Housing, Home Mortgage Disclosure, and Community Reinvestment acts. It is an informative but exciting whodunit thriller that tells a compelling story, with a few creative liberties, of how a small group of Jamaica Plain residents prevented an expressway from destroying their community, pioneered anti-redlining policies that stabilized their neighborhood, and converted the Southwest Expressway’s right-of-way into verdant and heavily-used greenway that transformed Jamaica Plain into one of Boston’ premier, and increasingly exclusive, neighborhoods— something Wise and his organizing colleagues might have found difficult to imagine in 1975.