“Reflecting on the recent tragedies in Gilroy, El Paso, and Dayton, and watching the news or reading the latest headlines, I often wonder what it would take to keep our communities safe, not just from gun violence but also from discrimination, ICE raids, criminalization, and fear.

Every year, police departments around the country host National Night Out—outdoor community events that are part of a campaign described as promoting police-community partnerships and neighborhood camaraderie. But is that the best way to promote the idea of safety and security? As a third generation native of the San Francisco Bay Area, I know too well that relationships between the police and communities—especially those of color—are often accompanied by feelings of fear, intimidation, and punishment. Safety really starts with us, the people living in these communities, loving each other, raising our children, and keeping our families together. How do we take a stand in our community for what we believe in?

In 2013, one year after the murder of 17-year-old Trayvon Martin in Florida by neighborhood watch captain George Zimmerman, the Ella Baker Center for Human Rights launched Night Out for Safety and Liberation (NOSL). Six years later, a growing number of organizations participate each year hosting block parties, rallies, vigils, and other community events around the country to reimagine what safety is beyond police.

I spoke with Ashley Chambers of the Ella Baker Center about the genesis of NOSL and how the event is evolving.

Keli Tianga: Tell me about the Ella Baker Center and what it did this year for Night Out for Safety and Liberation.

Ashley Chambers: Located in Oakland, California, the Ella Baker Center for Human Rights is an organization that believes in the power of everyday people to win change. [It] hosted a community block party with live music, spoken word performances, and free haircuts for young people. Local community organizations shared information about the work they do to build alternative visions of safety. One organization, Restore Oakland, a new community organizing hub and job training center, provides space for healing using restorative justice practices to hold neighbors accountable without relying on punishment and police.

What are the meanings of the words “safety” and “liberation” in this context?

“Safety” and “liberation” both speak to a new day that is free from police and state violence. Too often, conversations about public safety revolve around crime and fear. [The U.S.] has a long history of injustice from [its] beginning—from slavery and the genocide of native people to police violence in Black and Brown communities. [NOSL] came about after the murder of Trayvon Martin, [and] was reflective of that racial injustice. Safety does not begin with police, safety really begins with building healthy communities. It is about having a living wage job, healthy food, and being able to afford childcare, healthcare, and housing.

How has the event grown, both in Oakland and nationally? How many new communities have joined in to take part?

Six years after starting this event, it has grown to more than 30 organizations that participate each year. This year, 31 events were held in 25 cities across the country, including block parties, rallies, vigils, art exhibits, and other community events.

Are there programming guidelines, or are communities able to do what they want?

Organizations can participate by hosting an event in their neighborhood, creating artwork for the national event, joining the #SafetyIs conversation on social media, or adding their voice in an editorial or blog.

The Ella Baker Center provides event support, but participating organizations are able to plan their neighborhood events centered around their mission for their community. For instance, some organizations focused their events on defining what safety is for the LGBTQ community, discussing alternatives to policing and punishment, and moving toward healing-centered practices for young people.

I know Oakland is changing rapidly—who comes out? How has the event changed since 2014, and has your message changed at all to suit the attendees (for example-safety from policing may mean different things to an African American person and a Mexican person, how do you address these things?)?

Night Out for Safety and Liberation is different from the police-centered National Night Out event, in the sense that we’re not seeking to be the eyes and ears of the police. We are creating safety that reflects what our communities need. Since 2014, the message has been to expand the narrative about safety in a more inclusive way, and create a space where people of all genders, all races, all sexual orientations feel safe. For instance, for restaurant workers, feeling safe could mean having economic security so they are able to provide for and feed their families. In the Bay Area, Black folks have disproportionately been pushed out of the city due to the increasing cost of housing. Addressing gentrification to prevent the displacement of people of color from their communities [is a safety issue].

Every year, we are intentionally inclusive about the vendors we invite to Night Out for Safety and Liberation and who we work with. This year, we had “Know Your Rights” information from the ACLU, pedestrian safety from Bike East Bay, free haircuts from Eblendz da Barber, and free food. We are creating spaces where people can reclaim the opportunity to build community and safety with each other.

Are there specific goals that you hope to meet from NOSL?

Our goal is to change the conversation about public safety to be less focused on fear and punishment and more focused on how we can build dignity, power, and opportunity by reinvesting in our communities. Night Out for Safety and Liberation is an opportunity for conversations about how our country has continuously prioritized and profited from shackles, walls, and jails in communities of color, and how we need to invest in long-term solutions that create opportunity for those who have been most harmed.

This is also an opportunity to build our vision for Freedom Cities, a movement that seeks to make entire cities, towns, and communities safe for workers, the disabled, immigrants, Black people, Muslims, LGBTQ people and all oppressed communities. We believe we all deserve to live with dignity and have the opportunity to thrive. Freedom Cities are places where policies are shaped by local communities.

Are police invited to NOSL? Do they attend in any capacity—working, or as community members?

From its inception, NOSL was designed to empower our communities to create safety beyond policing, and the event is organized independent of any law enforcement. The traditional National Night Out event is centered around police partnering with community members to watch their neighborhoods. But, that tends to come from a position of suspicion and distrust in ways that are not helpful to our communities.

Although NOSL is an open event, we honor the contributions of community members to create safe spaces for us to live and be free outside of law enforcement patrolling our neighborhoods and outside of punishment. 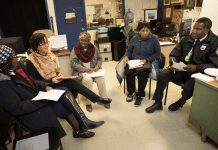