Year after year, data and research tell us which states are lagging economically, whether due to high poverty rates, lackluster job growth, high costs of living, or other factors. Although these rankings can be illuminative, they rarely tell us how poorly performing states secured their low rankings, nor do they specify what can be done to improve outcomes going forward.

When the 2017 Prosperity Now Scorecard was published last month, it was no surprise that Louisiana ranked second-to-last among all 50 states and the District of Columbia. Whenever these state-by-state rankings come out, Louisiana typically falls somewhere near the bottom. In many ways, the Scorecard confirmed what we already knew: that most Louisiana families, especially low-income families and families of color, are not faring well financially.

What was surprising, however, was how far Louisiana had fallen. Not long ago, Louisiana families were doing much better. Since the Scorecard began publishing annually in 2012, Louisiana’s ranking has fallen 15 spots to 50th place—more than any other state in the nation. Much of Louisiana’s steep and steady slide can be attributed to decisions made by policymakers that drastically constrained economic opportunity for low-income families.

In 2007 and 2008, the state legislature sharply cut income taxes on middle- and upper-income households. These tax cuts came right before the Great Recession, when high energy prices and an influx of hurricane relief dollars brought large budget surpluses. As oil prices dipped and the recovery dollars were spent down, the tax cuts stayed in place, which in turn meant shrinking revenues and state budgets.

In light of budget shortfalls, Louisiana initiated massive cuts to education and safety net programs. For example, between 2008 and 2015, an increasing proportion of the state’s funding for Temporary Aid for Needy Families went to activities other than child care, work assistance, and cash assistance. Meanwhile, as executive branch leaders refused to expand Medicaid coverage to more residents, Congress reduced the federal match rate for Medicaid. In response, Louisiana privatized its state-run system of charity hospitals, a decision that did free up financial resources, but also compounded the lack of health care options for the state’s low-income residents.

Despite these missteps, there are promising signs that new leadership in the state is ushering in a new course for inclusive prosperity.

According to the Scorecard’s assessment, in the 2016 legislative session, Louisiana outperformed other states in the number of positive policies it passed to help families get ahead. For example, Louisiana expanded its Medicaid program, and 430,000 low-income adults who previously lacked coverage now have health insurance. Additionally, Louisiana joined 21 other states in allowing banks and other financial institutions to operate prize-linked savings programs that reward savers for regular deposits with chances to win money and other prizes. This is expected to have a positive impact where it is badly needed—the proportion of Louisiana households without a savings or checking account increased from 8.7 percent in 2009 to 14 percent in 2015.

Furthermore, Louisiana’s department of labor took steps last year to lower fees on the prepaid cards through which unemployment benefits are distributed. Receiving the entirety of unemployment benefits will be especially meaningful for Louisiana’s workers of color, who are twice as likely to be unemployed. And finally, in early 2016, state leaders renewed a federal waiver that allows able-bodied adults without dependents to continue receiving Supplemental Nutrition Assistance Program benefits beyond the state’s arbitrary three-month cutoff—a waiver the previous administration had allowed to expire.

Last year showed clear steps toward progress, but these steps didn’t end when Louisiana rang in 2017. Earlier this year, the legislature changed state law to allow people returning from prison to access SNAP benefits immediately, instead of having to wait a full year. This was part of a far-reaching package of criminal justice reforms aimed at reducing the state’s incarceration rates, currently the highest in the world.

Although these signs of course correction are promising, there is much more work to do to recover lost ground. Looking ahead to 2018, state policymakers will renew their efforts to shore up Louisiana’s chronic budget shortfalls. The state faces a $1.5 billion gap between revenues and expenses due to temporary taxes that are expiring. If the legislature can’t agree on a tax reform package that brings in additional revenue, it could lead to additional cuts to education, health and safety net programs.

There is also an opportunity to strengthen the state’s Earned Income Tax Credit (EITC), a cornerstone of equitable tax policy. At 3.5 percent of the federal credit, Louisiana’s EITC is the second-lowest among states that have an EITC. The federal and state EITC encourages work and has been proven to have a transformative impact on families and children.

Advocates and other leaders also have an opportunity to raise the minimum wage. Given that 35 percent of the jobs in the state are low-wage, it’s no surprise that over half of households reported not having saved for emergencies in the past year. Louisiana is one of only five states without a minimum wage law. Efforts to pass a minimum wage have been stymied by opposition from business groups, which also oppose proposals that would let cities and parishes (Louisiana’s equivalent of counties) establish their own minimum wages.

Finally, Louisiana could pave a more inclusive path to prosperity by capping the interest 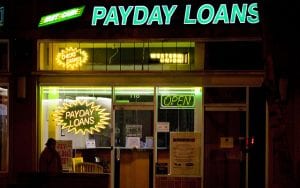 rates that can be charged on predatory short-term payday loans that often trap borrowers in long-term cycles of debt. Louisiana has four times as many payday storefronts as McDonald’s restaurants, and these outlets are only loosely regulated and can charge annual interest rates in excess of 500 percent APR. An interest rate cap of 36 percent APR could save borrowers millions of dollars.

In the next iteration of the Scorecard, we anticipate that Louisiana will move up the rankings given the diligence of advocates and depending on commitment from policymakers. With organizations like the Louisiana Budget Project and LA BEST leading the way, we look forward to seeing a more prosperous Pelican State.