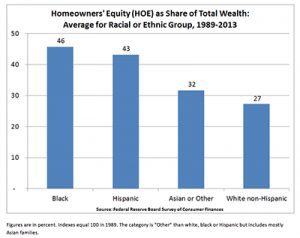 Despite its prominent role in Black and Latino balance sheets, homeowners’ equity contributed less than other assets to wealth accumulation during the 1989 to 2013 time span covered by the Survey of Consumer Finances. The same was true for white and other families, who benefited from proportionately larger investments in non-housing assets.

The drag exerted by poorly performing housing wealth on total wealth accumulation is starkly illuminated when comparing major racial and ethnic groups. During the 1989 to 2013 period, the average annual increases in the inflation-adjusted value of homeowners‘ equity and of all other asset types were as follows:

Excluding homeowners’ equity, rates of wealth accumulation were comparable among white, Black, and Hispanic families (although families in the other category achieved a significantly higher average gain). The final column reveals that it is the heavy concentration of Black and Latino wealth in housing, and homeowners’ equity’s poor average returns, that caused their average overall wealth gains to lag significantly behind those of whites.

The relatively low cumulative increase in wealth between 1989 and 2013 can be attributed to large declines after 2007, which is associated with the financial crisis and Great Recession. In fact, by 2004, Latino and Black families had experienced greater average overall wealth increases than white and other families since 1989. The devastating collapse of housing markets after 2007 hit Black and Latino families particularly hard because so much of their wealth was tied up in housing.

Drawing lessons from the last quarter century, our proposed three principles of sound financial management for families of color are:

Homeownership can make following all three of these principles more difficult, especially for economically and financially vulnerable families. Concentration of assets in housing has contributed to lower and more volatile wealth accumulation for average Black and Latino families over time and therefore should be avoided.

Note: All data is from the Federal Reserve Board’s Survey of Consumer Finances, a large triennial nationally representative sample of households. The racial and ethnic categories used throughout this article are 1) non-Hispanic white, 2) non-Hispanic African-American or Black, 3) Hispanic of any race, and 4) other, which includes people of Asian heritage as well as Native Americans, Pacific Islanders, Native Hawaiians, and other groups not included elsewhere.