So I wrote an article on children’s savings accounts for the most recent issue of Shelterforce. I ended up being quite a fan of them, thanks to the persuasive and knowledegable people I spoke with, but the truth is I started out as a bit of a skeptic.

Why? Maybe because I am skeptical of the all too common knee-jerk desire to fix poverty with education.

While I am a firm believer in equal access to higher education for all, it’s over-emphasized in our individualistic culture as a solution to society’s woes: By itself, education does not create jobs or fix poverty. It primarily affects who wins in musical chairs. Nor does it improve the quality of essential service jobs that will still need doing no matter what percentage of the population gets a college degree. (In 2014, almost half a million college graduates were working for the federal minimum wage and they are displacing other workers.)

However, all that said, reducing the race, class, and geographic disparities to access quality education and higher education does matter.

It’s a matter of inclusion and of fairness. Reducing educational disparities will allow us to stop losing the potential brilliance of scientists, inventors, and entrepreneurs and should also (help) shift those same disparities in the halls of power and distribution of wealth, stalling our current drift into two totally separate social castes. I would like to think that increasing equity in this way would also strengthen our public policy response to inequality.

Hopefully, better access to higher education funding at a time when a college degree has become a requirement for so many jobs would also help relieve the economic burden of student debt and allow students more options to pursue the degrees they most want or need at the best institution for them. (That CSAs are usable for any accredited post-high school training, not just four-year college, including community college and vocational training for infrastructure jobs.)

The particular genius of child savings accounts though, I discovered, comes in the way they shift the timing of the community resources devoted to higher education access so that higher education is seen as a possibility and even likelihood earlier in a child’s life, with a host of ripple benefits to them and their families. When you think about it, some of the “interim measures” being used to evaluate the effectiveness of these programs—such as reduction in maternal depression, or increase in socio-emotional learning—are at least as valuable outcomes in their own right as they are as predictors of increased college enrollment. And then the ability to graduate with lower debt has effects past graduation as well.

Children’s savings accounts are not just about access to education, they are about reducing asset inequality.

Higher education access is one part of broader economic justice. It’s not the only one. I’m happy to have gotten more of a sense of where child savings accounts can fit into the picture. 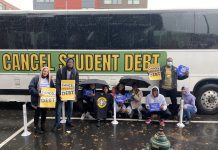 The Role Student Debt Plays in the Racial Wealth Gap