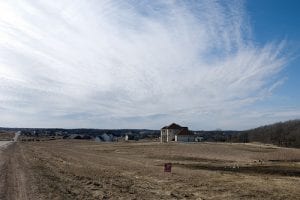 “Why does everyone in the country live out in the middle of nowhere? It’s so inefficient!”

This was the reaction of a friend of ours, who hails from Europe, on a recent visit to our rural neck of the woods. He pointed out the school bus, pausing at the driveway of every child’s house for pickup or drop-off. I myself have sat behind the bus on occasion as it does these drop-offs in the afternoons. Walking to the bus stop, which I used to do as a child in my suburban subdivision, is not an option for these kids, because everyone lives on a heavily traveled road with a speed limit of 55. If there were trails through the woods, maybe kids could bike to school or to a central pickup spot, but most places don’t have that sort of infrastructure.

There are car pools. A pretty high share of the populace uses this method to commute in our county, and there are “school pools” as well. But many folks would just as soon do their own thing, rather than share a ride with neighbors.

It isn’t so much that people wouldn’t get along if they had to share. It’s that people don’t want to ask for help. A colleague of mine suggested to me once that this was the biggest problem we have in trying to create the social infrastructure for a healthier community. People often view asking for help as an imposition on their neighbor, and also they fear they may be perceived as asking for some kind of handout. So they don’t ask.

This is hardly a roadblock just for improving efficiency in rural transportation networks. It’s a barrier to shared housing, or even multifamily housing. People, and local government, are willing to spend more money on transportation, housing, child care, and a host of other necessities because their whole way of living depends on doing things solo.

A recent visitor to my office presented community organizing at the neighborhood level as the best way to attack the problem. Organizers need to identify someone in each area who is a good prospect to volunteer their time to reach out to their neighbors, to encourage them to get together to share trips to school, to shops, or to places for recreation. Perhaps in each neighborhood one such person exists, just waiting for someone else to encourage them to act. And in every such neighborhood there are a dozen other people who need help, but are waiting for someone to come along and offer it.

The Twin Cities Metropolitan area, pictured, has the highest rate of urban sprawl in the United States.