Milwaukee is about to lose an incredible economic opportunity due to an inability to capitalize on our talents.

To kick off the new year and my inaugural Rooflines blog post, I’d like to begin by outlining an “Opportunity Profile.” I intend to incorporate these profiles in future blog posts to highlight the limitless potential of our existing built environment—those forgotten buildings which have cradled Americans (and have housed creative engines) for decades. My expectation is for subsequent blog posts to follow a similar structure; using Opportunity Profiles will lay a foundation for exploring ties between real estate development, economic opportunity, and community building. I cannot envision a better illustration for this inaugural post than the following Opportunity Profile:

Meet the Schlitz Brew House in Milwaukee: the building that made “the beer that made Milwaukee famous.” To too many Milwaukeeans today, this one-of-a-kind diamond in the rough is just another structure to bulldoze in the name of progress. How this surprising dismissal has become mainstream stems from the collective voice of our regional commercial real estate and development community: newer is often better, and 122 years old = undesirable.

We must be kidding ourselves. Joseph Schlitz most likely envisioned this building as one of a few great powerhouses that would carry Milwaukee into the 20th century. After all, Milwaukee’s breweries had already demonstrated an incredible ability to spur economic development in the city. Only 29 years into the life of the Brew House, prohibition would severely jeopardize the likelihood of this structure’s survival with a 14-year hiatus in the general legality of “intoxicating liquors.”  But Milwaukee and Schlitz prevailed through it all, and the Brew House would enjoy another 79 years in its life. Even after the brewery’s production had ceased, the continued tenure of the Brew House offered promise in its eventual conversion to another job-producing use.

That is, until the “Great Recession,” which if anything has only hindered a belief in our abilities, not our actual ability to rehabilitate challenging buildings and strengthen the economy. The embedded talents, and philanthropy, in Milwaukee’s population far outweighs the brainpower and manpower needed to renovate a building like the Brew House. Our talents and dollars, collectively applied, could once again return the beauty to an economically viable use. But without belief, the building shall fall (as soon as two months from now), leaving a permanent hole in Milwaukee’s brewing history landscape.

How influential, the voice of another. The title of this post was inspired by the fact that I can count on one hand the number of local professionals who have consistently advocated for our ability to fundraise, market, and rehabilitate this structure. Without overwhelming support from the real estate community, the economic development community, the historic preservation community, local government, or our professional community, one cannot altogether blame the long-term owner of the Brew House—who after approximately 29 years of ownership, is now convinced that only demolition of this gem can benefit the revitalization of the Schlitz Park office complex.

I often feel as though Americans—myself included—have succumbed to the power of a “Great Recession” that bears little weight on the long-term success of our city. Coupled with a lack of supporting voices, a lack of courage—and will—may ultimately limit us from securing creative financing and finding committed tenants for every structure in the existing built environment. If Prohibition wasn’t the sword that slayed the Brew House, then isn’t the Great Recession simply our scapegoat?

After all: based in the lessons of our grandfathers, we are the creators of our future.

I am fearful of forgetting the many reasons why I long ago fell in love with American cities. Why should I remember when only rarities in the visual landscape exist to remind me?

For more information on Schlitz Park and the Brew House, visit: 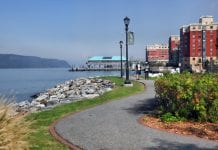 Fighting for the Right to Remain in Southwest Yonkers 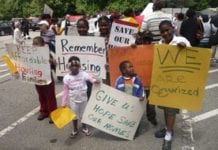