I was just shy of 30 when I became the youngest executive director of my Boston-based CDC, the Asian Community Development Corporation. Up until a few weeks ago, I told those who asked my age that I was a respectable 40 and then waited to enjoy the uncomfortable silence that followed. I did not want to explain myself, nor be excused from the get-go. I learned quickly though, that Boston is a parochial town and there I was, a Chinese-American woman with a laid-back Californian arrogance, selected to replace a grey-haired white woman by a board that had more salt than pepper. I had a lot to prove. Squarely in the middle of a recession, I was charged to make the unenviable hard decisions of who to cut and what to cut. Maybe someone more seasoned would have passed on this job. Nevertheless, I made the decisions and was willing to take the fall. And with my staff, I moved the organization and its work forward.

With imminent cuts looming for federal funding for community development, our field and the new leaders that emerge in it are challenged to be more resourceful and redefine how we get work done. We can no longer operate and rely on “shoulds,” but we in the industry need to focus and nurture the “coulds” that are enabled by building the capacity of the community and its members rather than just the organizations. This requires ingenuity, creativity, and valuing the fresh ideas that young leaders can contribute to the field.

To me, the definition of activism, which is the vehicle for the modern community development industry, and yet arguably has been squelched in its pure militant form by the creation of said industry, has evolved to be “How do we get it done?” “We” refers to an inclusive definition of community members — from those named gentrifiers by the almost indistinguishable bleeding-heart progressives who give them that name, to youth who act as cultural and linguistic bridges for their immigrant parents but never are encouraged to use their voices as stakeholders themselves, to those die-hard community folks who seek civic participation as a hobby. In the past, being an activist meant simply to advocate. But inherent in advocacy is the structure of dependence — you are advocating to another entity to make changes and sometimes, reinforcing a bottleneck to change. Protests in front of government buildings have their place, but advocacy is not mutually exclusive with taking action directly.

Rather, in an activist mindset, identifying what the community realistically has control over and then acting becomes critical. In Chinatown, a group led by a committed core of residents took a vacant commercial storefront and transformed it into a temporary library in a matter of months. Up until that point, the community had been focused on demanding that the city provide a branch library even though the city was closing others throughout town.

I don’t like to wait around, and there is no reason to if other options exist. Let’s get it done. Please blame that on my youth. 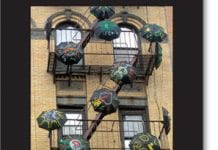