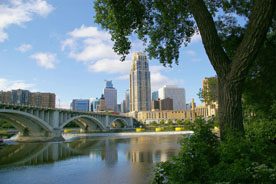 Credit that Midwestern congeniality. Or maybe there’s something in the water in the land of 1000 lakes. But whatever’s going on in Minnesota’s Twin Cities of Minneapolis and St. Paul, it’s producing a culture of collaboration that is fighting the foreclosure crisis, by banding together community-based organizations, philanthropies, nonprofits, and local government agencies in ways only seen on smaller scales around the country.

The results are wide-ranging. Foreclosures in the area that spans across two counties — Minneapolis in Hennepin County and St. Paul in Ramsey County — were spread over a large area. So rather than attack the whole problem, neighborhoods were segmented strategically into smaller pieces — a “cluster approach” — as a means of neighborhood recovery, infusing capital to produce visible, immediate change on the ground.

In North Minneapolis, where neighborhoods already had a large inventory of vacant and abandoned housing and crime, drugs, and prostitution took their toll, the Hawthorne EcoVillage, developed using sustainable green building and landscaping, helped to transform a four-block neighborhood there. “Sometimes, a problems is so big that you don’t know where to start,” says Thomas Streitz, Minneapolis’ housing policy and development director.

So you start small, but you get everyone involved.

The list goes on and on, but the robust collaborative system, even in the midst of this economic climate, is the result of an existing network of partnerships between CDCs, CBOs, local governments, and foundations, that functions even when times aren’t so great. In fact, Streitz says, it’s during the tough times that this web is at its most influential and essential. “We have targeted our funds in a very strategic way,” he said, outlining a “cluster approach” to neighborhood recovery.

By all accounts, this is the necessary response, and these types of efforts were essential in maintaining the stability of a still shaky region of nearly 3 million people. The foreclosures here in the last 18 months alone have surpassed and rendered minute any of the vacant property or neighborhood blight challenges in the past two decades. Starting in the 1980s, when places like Cleveland, Detroit, and Chicago were suffering from depressed economies, the Twin Cities experienced fairly significant levels of divestment, but it wasn’t to the level of other parts of the upper Midwest.

That all changed, however, with the Great Recession. Progress suddenly came to an abrupt halt, according to Andriana Abariotes, the executive director of the Twin Cities Local Initiatives Support Corp. (LISC). “We were a strong market city, especially in more challenging neighborhoods that were older and closer to the core — places where LISC was working. We were seeing rebirth of these neighborhoods,” she said.

“Then we saw it begin to slide off the cliff.”

Part of the story of the Minneapolis’ Northside and the east side of St. Paul was that they were the last affordable places of value near the central core where people could still enter the housing market. But the easy availability of subprime loans and exotic mortgage products and the competition for homes by outside investors drove home prices way up without strengthening these fragile neighborhoods. Just over a decade ago, Abariotes said, property values ranged from $75,000 to $90,000. Two years ago, that level increased to roughly $170,000. Today, properties are going on auction at about $12,000 to $25,000. “It was like a flood. It happened that fast: almost overnight,” she said.

Two-thirds of all foreclosures in Minnesota occur in metropolitan areas and in the Northside, 60 percent of the foreclosed homes were investor owned, Abariotes says, painting a picture that could be transposed on so many neighborhood canvasses around the country: “People bought the homes to flip or to rent; they saw late night infomercials; they used subprime; they couldn’t refinance anything; they had exploding ARMs.” There were blocks with five to 10 vacant properties and, on average, a property only had to sit vacant for about 10 days before the copper was stripped. In the winter, it would take the same amount of time before there was a gas explosion or a water pipe burst, leaving the houses completely trashed. “Now this stock is so deteriorated,” Abariotes says.

And fixing the problem is not easy, and it takes time. But many people involved in the neighborhood stabilization effort in the Twin Cities remain confident that the existing partnerships helped to mitigate a problem that could have been much, much worse. “Some of the collaborations here have been in place for a long time,” said Dan Bartholomay, commissioner of Minnesota Housing, the state’s finance agency. “Relationships have evolved and developed and there is a certain level of trust required here, a willingness to solve problems, and a set of common goals.”

And of course, they took conscious effort and commitment to form and nurture. Offering an aside, Melissa Manderscheid, who chairs a key foreclosure response organization, is aware that the Twin Cities is often used as a model for collaboration. While many interviewed for this report touted the accomplishments of the collaborative network, all were realistic to the long-term challenges involved, as Manderscheid summarizes: “So many of the people who were around the table early on had an opinion. It’s important to note that it wasn’t some big love-in, and that there are people who have real, substantive differences when it comes to foreclosure response. But we try to hammer out ways to work through this, and sometimes it’s really challenging, but that’s the way we’ve been approaching it.”

The Key to Collaboration is Coordination

Bartholomay pointed to not just collaboration, but a strategic, coordinated effort to respond to the Twin Cities’ foreclosure crisis. This is the aim of the Minnesota Foreclosure Partners Council (MFPC), formed in late 2006 and early 2007 to identify, fund, and implement coordinated policies and programs that address the effects of foreclosures on families and communities. The Council grew when the state and the Family Housing Fund (the aforementioned Twin Cities nonprofit) saw a growing number of foreclosures. The partners include local and county government, foundation, lender, and nonprofit representation — basically a stew of all of the likely actors involved in addressing foreclosures.

“We needed to understand the problem first before we were going to solve it.” And part of that understanding was establishing effective data collection, a system that Manderscheid termed as “not organized” and still remains to be developed and implemented, which will be an “enormous task” for the county. From there, the Council could get to work.

While working to understand the scope of the problem, MFPC examined the important role counseling plays in foreclsoure prevention. “Prevention is very cost effective, far more so than buying and fixing properties if and when we get to the point,” Manderscheid says. But the counseling network in place was simply unable to respond to the “sheer volume” of subprime concerns, Manderscheid says. “There was no hotline, no phone number where people could call for advice. The lines of communication were not readily available but there were people — lots of people — who were facing a foreclosure sale, were running out of steam, and needed advice quickly.

So MFPC directed funding to strengthen the capacity of the existing network to meet the growing need for more counselors, especially multilingual ones.

Nobody Shows Up Unless They Know About It

In addition to the actual counseling, there’s a continued effort to make homeowners aware that counseling is, in fact, available, and not only to help prevent foreclosure, but also to help people post-foreclosure. Further, 60 percent of foreclosures in the region are tenant occupied, and even though Minnesota law allows for tenants to stay in their homes for at least a year, most residents didn’t know what their legal rights were. The state also passed a cocktail of predatory lending legislation in 2007 that made certain types of mortgage products illegal, but again, without adequate counseling, few homeowners or prospective homeowners know about these laws and often are unable to take the proper course of action to defend their rights.

The Minnesota Homeownership Center, a statewide, independent network of more than 50 nonprofit, public and tribal organizations has also provided homeownership counseling for many years. Julie Gugin, the Center’s executive director, credits a centralized and standardized approach to their success in handling the current crisis. “We had a network in place. We had agencies on the ground doing foreclosure prevention reporting to us and able to say what was going on.”

The Center has been in existence for about 20 years, starting as an organization providing leadership and direction for agencies in and around the Twin Cities, but as demand grew, so did the Center, and it eventually began to collaborate with foreclosure prevention agencies that were launched by the Family Housing Fund (FHF). Together, they built a statewide counseling model for the Center.

And it tuned out that the FHF model was a pretty good one. By its nature, the FHF is the essence of “institutionalized collaboration,” says Tom Fulton, FHF president. The Family Housing Fund is a vehicle for public-private collaboration, acting as a coordinating and convening agency, FHF also functions at a Community Development Financial Institution, able to support many of foreclosure response programs in the Twin Cities.

FHF has a long history of focusing on important housing issues. In the 1980s, homelessness was the order of the day and the FHF led a joint effort with two cities devising a comprehensive plan to address the issue. That built a lasting foundation for cooperative efforts to handle homelessness. Like so many of the players working to stave off the state’s foreclosure crisis, Fulton points to that kind of existing collaborative culture that, at the very least, lets partners move quickly to focus on the crisis and not on learning how to collaborate: “You never actually know when you’re creating a true collaborative relationship that could be needed again, or what it’s going to be needed for.”

“There is definitely a desire here to do things and do things right,” says Eric Muschler, the Region and Communities program officer for the McKnight Foundation, which helped form FHF and supports inter-nonprofit collaboration. “It keeps people fresh and thinking about solutions creatively.”

“We’re the strongest if we govern in collaboration with private and nonprofit partners,” says Elizabeth Ryan, one of the first FHF co-chairs. Fulton adds that most organizations hit a “critical tipping point” when they realize they must work together to serve a mutual mission and do it more effectively. He also notes the fear among some nonprofits that collaborations will water down the organization’s identity, though he takes a decidedly more optimistic tone: “If the collaboration works, not only is the collective work elevated, but individual organizations are more successful. Success builds on success.” 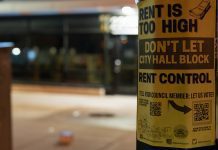