Columbia Heights in Northwest Washington, D.C., is replete with everything you’d expect from a bustling urban center: hipsters and shops, nightspots and restaurants. Howard University is just off to the east; the Orange and Green lines of the DC Metro stop right there at 16th Street as people come to and from work; on a nice day, a massive plaza lined with restaurants and cafes attracts visitors, residents, shoppers, or just people who want to hang out by the fountain.

Here’s the predictable part: it wasn’t always like this. The Columbia Heights section of the city has seen unbelievable levels of development. Gentrification, renewal—all loaded terms in the grander sociological scheme—have brought a certain vitality there at which even longtime residents gaze in awe.

And here’s the not-so-predictable part. The effort to revive the neighborhood was not the product of an outside developer preying on a vulnerable neighborhood or a prime piece of real estate. It was part of a four-decade neighborhood movement that is reincorporating the area’s history right in the middle of new development. Like so many urban neighborhoods in the late 1960s, Columbia Heights suffered in the 1968 riots following the assassination of Dr. Martin Luther King Jr. Sixty percent of Columbia Heights’ businesses were burned or looted in those riots, and nearly a fifth of the neighborhood’s housing stock was severely damaged. “This was a ghost town. There was nothing here, and then they began to start, parcel by parcel, getting houses rebuilt, and life was coming back,” said Thomas Dawes, the director of the affordable housing division of the Development Corporation of Columbia Heights (DCCH), a community development corporation formed in 1984 by a handful of community activists. DCCH had an urban renewal goal at that time that focused squarely on assisted rental housing.

“This was vacant land,” he said, pointing to the area known as Tivoli Square, which encompasses the historic Tivoli Theatre, the only landmark remaining at that spot from the days when the neighborhood housed high-level government workers and justices of the U.S. Supreme Court, and then later home to middle class African Americans, where Duke Ellington purchased his first house.

Tivoli Square, which features a revitalized Tivoli Theatre, also contains a Giant Food supermarket, but it’s the looming commercial development just across the street, DC USA, that is clearly (at least visually) the centerpiece and the economic engine of this area. The 550,000 square-foot complex opened early in 2008, bringing Target, Best Buy, Staples, Marshall’s, and a health club to make up the largest retail complex in the city. This is a thriving area, to be sure, with new condos mixed in with the Victorian townhouses that remain from the old days.

On the surface are all the characteristics of classic gentrification: new, mixed-use development with some major anchor stores to add economic vitality to the area, but behind it all is DCCH’s goal of injecting financial investments into the neighborhood along with civic engagement contributions. Governed by a 31-member board of directors composed of residents and business owners, DCCH uses public funds to leverage private funding.

The CDC is also heading up the Neighborhood Jobs Initiative, which aims to reduce unemployment and underemployment in Columbia Heights. Funiding for the five-year program was awarded to Columbia Heights as part of a national competition funded by the Rockefeller Foundation. DCCH also conducts leadership development and business training; they’ve also created job placement services for community residents in the new retail development.

The physical retail plan for Columbia Heights began shortly after the destruction caused by the riots of 1968, and an early goal for the area was to build an urban corridor that, until then, had been difficult to achieve in a climate of urban disinvestment. In the decades that followed, as commercial development trended the way of the suburbs, that challenge became even greater, but now, even in the throes of a major economic decline, some key retail players saw an opportunity. The density of the Columbia Heights area was one factor: within half a mile of DC USA are roughly 30,000 people. Second, the Metro stop brings people from all over DC to the Target, which is the first Target in DC. The opening of this location alone kept potential shoppers from heading out to the Maryland or Virginia suburbs. This Target, per square foot, routinely ranks in the top tier of highest performing Target locations in the country. Likewise, the Best Buy performs among the top locations on the east coast.

NIMBYism is, of course, a big concern. It’s something of a contrast to see the Thomas W. Lamb-designed Tivoli Theatre alongside a booming Best Buy sign. Residents at first were more than hesitant at the prospect of this type of retail entering the community. But the area has proven to be a model for large anchor stores, whose business models are usually based on suburban store performance. André Byers, DCCH’s director of business development, pointed to Giant Food balking at the idea of incorporating a parking deck into the store’s design.

“It’s a different kind of concept,” said David Stein, director of building operations at DC USA. Stein, who has an urban planning background, said that what’s been achieved in this area, in an urban context, is notable, though he acknowledges the inevitable cynicism. “People say, ‘Oh, you have Bed Bath & Beyond and Target and those are just suburban stores. What’s so different about it?”

The difference, on any given day, lies in foot traffic, and as long as developers and DCCH stay true to the interests of the community, it’s more than just retail revival: it’s neighborhood preservation. 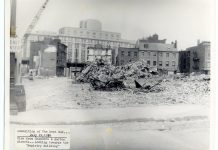