A nation came to believe, as Katz writes, that homeownership was the magic bullet that would make the poor wealthier, better citizens, and would improve their communities. Securitization would lead to more lower-income families becoming homeowners. Since government was not the solution, but the problem, as Reagan famously said, securitization and deregulation could cut back on spending money for subsidizing private and public housing.

Those darn federal housing finance bureaucracy’s rules and regulations, which limited the kind of funds that could be invested in real estate would no longer obstruct the spread of homeownership! Investors would make more money on a safe investment. Moody’s and Standard and Poor’s, the rating agencies, would get paid by investment bankers by making sure each mortgage pool was a safe investment. Savings and Loans and banks would quickly sell the mortgages and get more money to lend to potential homeowners. This, of course, gave rise to a new and dangerous breed of mortgage bankers, like Countrywide, who, with no skin in the game, exploited the use of the subprime loan. And Ranieri? He would make more money for Salomon Brothers than anyone in its history.

What followed, Katz shows in chapter after chapter, was the growth of irresponsible mortgage companies operating outside the reach of the CRA, get-rich-quick house-flipping schemes, criminal mortgage frauds, predatory subprime loans, credit default swaps, and now, the worst recession since the Great Depression.

With her keen eye, vivid descriptions, and a sense of irony, Katz helps us navigate this complex story by traveling across the country so we can meet the winners, and (mostly) the losers. Hapless victims spend their savings on Florida swampland and lose money buying and flipping housing until there are no buyers, and they get stuck with worthless properties. In Cleveland’s neighborhoods — Slavic Village, Shaker Heights, South Euclid, anyone could get a mortgage even if they had no assets. Katz reminds us that much of the financing was not for new homeowners, but home equity loans. The mortgage brokers made higher commissions for selling high interest sub prime mortgages to customers who qualified for prime loans. Bankers sold the mortgages investment banks, like Solomon, which would put the mortgage in a pool of mortgages and sell it to investors, and everyone made money.

To show how the culture of greed and debt was nurtured through indoctrination, Katz takes us to a pep talk in Florida where would-be rich people get inspirational self-help speeches from people like Tony Robbins. Katz takes us to a harrowing crime spree in Atlanta, where mortgage fraud is rampant. After correctly defining mortgage fraud, as “any transaction where a buyer or seller lies to reap more money on a deal, or to qualify for a purchase they otherwise couldn’t get.” Katz points out that mortgage fraud “would apply to much of the everyday business of the home trade in the mid-2000s.”

Everything might have continued along quite smoothly except for one problem. The mortgages packaged into mortgage-backed securities by Wall Street firms and sold to investors required home values to keep rising and more importantly for borrowers to continue paying their mortgages. When they lost their job or couldn’t afford to pay the balloon payments the delusion easy credit came to an end, they stopped paying, speculators started selling the housing, and the bubble burst.

Many of the culprits have become familiar to some of us: home builders, real estate brokers, former Federal Reserve Chairman Alan Greenspan, predatory lenders, and the Wall Street bankers who colluded with the Reagan “brain trust.” Katz’s compelling narrative implicates the entire financial and housing food chain, which participated in this greedy shell game. Brokers who brought the borrowers to the lenders, mortgage companies that provided the mortgages, Wall Street firms who packaged the subprime loans into exotic investments, investors who bought the securities seeking the highest rates possible and credit agencies that cheated on the ratings. Greenspan and the regulators kept pumping money in, and instead of providing oversight, they just looked the other way. Some acted legally. Some acted illegally. But most of it was simply business as usual. 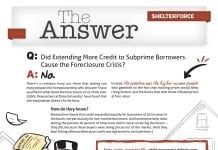 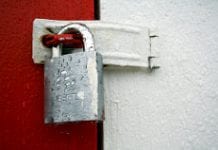 How Data Disclosure Will Help Prevent the Next Financial Crisis 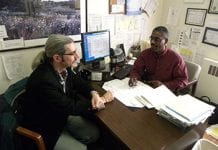 Staying Afloat by Branching Out