Rent control has had an eventful six months. In California, landlords spent $66 million to defeat Proposition 10, which would have overturned the Costa-Hawkins Act, a 1995 law that limits rent control expansion in the state. In New York, after years of organizing by groups like Community Voices Heard, the Village of Ossining became the 41st municipality to adopt rent stabilization, only to have implementation of the law stymied by its mayor. And most recently, in the largest expansion of rent control in decades, Oregon adopted a statewide measure that will limit annual rent increases to 7 percent above inflation in older buildings.

The popularity of rent control in the United States has ebbed and flowed over the past 100 years. The most recent high point was in the early 1980s, when about 200 municipalities across the country were practicing it in some form. A conservative, anti-regulatory push weakened and repealed rent regulations in subsequent years, and the policy largely fell out of favor among many state and local policy makers by the 1990s. But Oregon’s rent cap measure may be signaling a turning point.

The resurrection of rent control will likely continue as groups like the Kenwood-Oakland Community Organization and MHAction in Illinois organize to repeal the state’s preemption law and replace it with a new statewide rent control measure. In New York, the Upstate-Downstate Housing Alliance is fighting to strengthen and expand existing laws. And though Prop 10 lost in California, tenants are not giving up.

For advocacy efforts, what has been missing is current, nationwide data about the potential impact of rent control expansion. What can now fill this gap is Our Homes, Our Future: How Rent Control Can Build Stable, Healthy Communities, a new report by PolicyLink, the Center for Popular Democracy, and the Right to The City Alliance. The report provides a timely overview of the sheer magnitude of the rental crisis in the U.S. and describes why rent control is “a sensible and necessary” solution because of its immediacy, cost-effectiveness, and benefit to low-income households.

As I wrote in a recent Community Service Society report about rent regulation in New York City, rent control is a broad legal category that encompasses everything from strict rent caps to mild eviction protections. Different types of rent control measures serve very different goals. As both organizers and lawmakers consider the intricacies of rent control implementation, Our Homes, Our Future provides a list of principles that make the law more effective, including:

The adaptability of rent control is also its strength. For example, after the foreclosure crisis, the rental market expanded nationwide to include more single-family homes. Oregon’s new law covers non-owner-occupied single-family properties, which is different from rent control measures in New York and California.

The first step for many states’ efforts is to repeal a rent control preemption law, a legacy of an earlier anti-regulatory era. In others, it is getting existing tenant protections expanded. No matter the strategy, across the board, rent control is just one piece—albeit a very effective one—in the puzzle for broader housing protection. 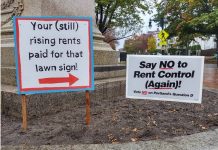