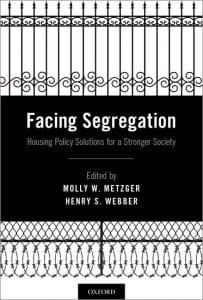 The job of massive integration seems overwhelming, but the impetus to pursue diverse neighborhoods appears to be underwhelming, at best. Pundits tell us the national racial divide is stark. Segregation impedes national economic prosperity as large segments of the population are poorly connected and cannot obtain high-skilled jobs. Segregation also poisons our politics by preventing communication and thus deepens conflict and gridlock. Yet, despite the evils of segregation or because of it, integration policy initiatives are halting and haphazard.

A new book, Facing Segregation: Housing Policy Solutions for a Stronger Society, edited by Molly M. Metzger and Henry S. Webber of Washington University in St. Louis, explores the history, impact, and policy solutions to racial segregation. Metzger and Webber compile essays, analyses, and reflections from scholars and practitioners, including Richard Rothstein, Lance Freeman, and Barbara Sard. With John Taylor, president and founder of National Community Reinvestment Coalition (NCRC), I also co-authored an analysis on how to use the Community Reinvestment Act (CRA) to promote integration.

Richard Rothstein, research associate at the Economic Policy Institute, kicks off the book with themes from his recent and seminal work, The Color of Law, which details how American segregation was largely not the result of individual or private-sector prejudice. Rather, the federal government invented the means and methods to segregate by race that led to the widespread practice of redlining.

Starting with the segregation of public housing enacted by the FDR administration, the federal government implemented segregation on a massive scale by financing the suburbanization of the white lower- and middle-classes in the pre- and post-World War II years. The federal government required that private developers and lenders only use Federal Housing Administration (FHA) loans for white homeowners in the new suburban developments. The results across the United States mirrored the outcomes in the city and county of St. Louis, where of the 70,000 homeowner units built in those jurisdictions between 1947 and 1952, only 35 were purchased by African Americans with FHA loans.

These racial patterns of development locked African Americans into inferior opportunities and outcomes. Homeownership is the primary means of wealth building in our country. Because African Americans were systematically locked out of homeownership, their communities suffered from lower property tax revenue to support decent schools, less access to jobs, and a whole host of other harmful social and economic outcomes.

In his chapter on the enduring significance of racial segregation, Jason Purnell, associate professor at Washington University, cites Census data to illustrate the vast gulf in median income levels in white and African-American ZIP codes in St. Louis, which in one sample is $90,000 and $15,000, respectively. These income differences can obviously be tied to differences in wealth, poverty levels, and even death rates.

Raj Chetty, William A. Ackman professor of public economics at Harvard University, in perhaps the most well-known recent research, documents profound improvements in economic opportunity for children who are able to move from segregated neighborhoods to more diverse communities. Furthermore, as Metzger and Webber remind us in their introduction, a large body of research documents that segregation impedes economic progress and social mobility.

Despite the clear and crushing harms of segregation, victims as well as perpetrators of segregation are ambivalent about integration. Lance Freeman, Ph.D., professor and director of the Urban Planning program at Columbia University, in his chapter on the siting of federally subsidized projects, suggests that African Americans have been generally more insistent on integrating schools and workplaces than housing. Starting with the New Deal, an informal deal was presented to African Americans: the government will improve the quality of housing, but the housing will be in segregated neighborhoods. Over time, African Americans understood that their political and institutional power derived from segregated, concentrated neighborhoods. In the civil rights era of the 1960s, African-American community movements often advocated for new housing in poor inner city African-American neighborhoods rather than housing opportunities in suburban communities.

Purnell further employs the insights of social psychology to illuminate the difficulties of enacting integration strategies. Discussing the insights of the psychologist Gordon Allport, Purnell reminds us that projects and policies involving distinct social groups have the best chances of success if the groups: meet as equals, share common goals, cooperate in reaching goals, and have the support and endorsement of authorities, laws, and norms. If an initiative such as integrating housing or schools is perceived as competitive and zero sum (in which gains for one group come at the expense of another when the resource pie does not grow), the initiative will be divisive and unsuccessful. Reading Purnell’s chapter provides an understanding of why massive busing was resisted. Purnell also suggests that it “would seem ill-advised to highlight race in the redistribution of resources.” In this light, Rothstein’s proposal to promote a homeownership reparations program to African Africans is unrealistic, which Rothstein acknowledges.

Short of a massive program undertaking, Purnell’s discussion of Allport’s conditions for integration adoption is a useful guide for more modest initiatives. The enthusiastic support of leaders and the public sector is required if different groups are to see that these initiatives enhance the prospects of everyone. The Trump Administration’s anti-immigrant rhetoric and pullback from HUD economic diversity programs make integration at all levels all the more difficult. A skilled mediator is needed for groups to cooperate in the pursuit of common goals. In the absence of national leadership, the responsibility shifts to other units of government, as well as civic and religious institutions.

In his chapter on mixed-income housing, Mark Joseph, professor and founding director of the National Institute on Mixed-Income Communities at Case Western Reserve University, extends Purnell’s and Allport’s insights into improving the success of mixed-income housing in promoting social and job mobility for lower-income residents. He notes, for example, that resident associations tend to be exclusionary and do not involve the lower-income residents of mixed-income housing and perhaps will be less exclusionary if more informal means of interaction, such as common areas, increase interaction among diverse residents.

Given the tensions and ambivalence associated with integration strategies, the book outlines two opposing but perhaps complementary strategies. Employing both avoids over-reliance and exhaustion of one main approach. One strategy is commonly called “moving to opportunity” and entails helping lower-income households and households of color to move to more affluent communities. The other strategy focuses on revitalizing segregated and/or distressed neighborhoods. Philip Tegeler, executive director of the Poverty & Race Research Action Council, discusses the tensions and possible harmony in these two approaches in his chapter about HUD’s Affirmatively Furthering Fair Housing (AFFR) requirement.

As part of the Fair Housing Act, AFFH requires jurisdictions to identify and combat the barriers segregation pose to improved economic and social opportunities. As Tegeler mentions, HUD will frown upon an imbalance of employing either strategy; moving to opportunity or revitalizing segregated and/or distressed neighborhoods. However, it is unclear what an imbalance is and what would be an optimal mix of the strategies.

The book also describes programs and approaches for both moving to opportunity and neighborhood revitalization strategies. Barbara Sard, vice president for Housing Policy at the Center on Budget and Policy Priorities, describes how Section 8 rental subsidies could be used more effectively to provide opportunities for lower-income renters to live in more connected communities. She cites data that currently, only about 13 percent of voucher recipients live in low-poverty neighborhoods, despite ample opportunities to subsidize integrative moves since rent levels are surprisingly affordable in a number of low-poverty neighborhoods. She goes on to describe a series of administrative reforms such as changing how to calculate subsidy levels and interjurisdictional cooperation that would promote moving to opportunity.

NCRC’s chapter describes how the CRA could be used in a more focused manner to further integration and encourage banks to finance affordable housing in gentrifying neighborhoods and mixed-income housing in distressed neighborhoods. Despite some regulatory encouragement and guidance, CRA exams rarely discuss or promote these efforts. We assert that community groups and bankers should be asking CRA examiners to regularly consider pro-integrative affordable housing and community development projects.

The bottom line is all of this is hard work. When practitioners talk about revitalizing neighborhoods, they often have very different strategies in mind, and so there is no intellectual consensus among the disciplines about an approach whether it is full-bore integration or revitalizing distressed neighborhoods, or a mix.

It’s perhaps an unsatisfactory answer, but maybe the only one that can be applied at this point: employ a mix of multiple approaches. Needs and political and sociological contexts across localities will differ and will inform the approaches that can be effectively employed. But one thing is clear: a larger national commitment of resources is imperative if we are to achieve more meaningful opportunity, more harmonious relations among groups, and better economic outcomes for all of us.

In Defense of Asian American Neighborhoods