Juliet Garcia’s parents were poor and lived in Harlingen, Texas, yet they were able to save $5 every month toward their child’s college education. Juliet’s mother died when she was 14 and her father continued to save, which helped Juliet attend and graduate from tFhe University of Texas at Houston. She went on to earn a master’s degree and a doctorate from UT Austin, and led a storied career as the first Mexican-American female college president, helping thousands of low-income students receive scholarships to attend college.

Juliet is one of two dozen stories in Bob Friedman’s A Few Thousand Dollars: Sparking Prosperity for Everyone that shows how Americans from all different backgrounds have managed to leverage a few thousand dollars to lead lives that have helped thousands of other people.

This book intersperses powerful stories with insightful analysis of how small amounts of money can help Americans pursue education, homeownership, and business opportunity to create a better future for themselves and their families. Friedman is uniquely positioned to both tell the story and advocate for progressive wealth-building policies and programs—both of which are few and far between. 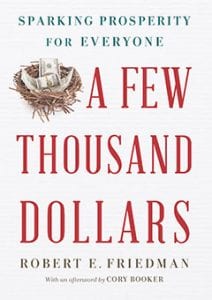 Friedman is the founder of Prosperity Now, formerly the Corporation for Enterprise Development. He helped launch the modern self-employment field, micro-enterprise development, and the asset-development field through piloting Individual Development Accounts (IDAs) and Children Savings Accounts (CSA) toward a vision of universal asset-building policies for all.

The book’s underlying theme is that people—regardless of race, ethnicity, gender, income, or circumstances—do save money, but they can also start businesses, purchase and maintain homes, and graduate from college when they have access to a few thousand dollars of investment capital.

The irony is that with all this latent potential, our government’s policies have fostered an economic environment that has the highest degree of economic inequality since the 1920s.

Friedman is an excellent guide in the sharing of data and policy information, mostly fiscal tax policies that have hindered widespread prosperity. He raises the important question of “what portion of U.S. households have even $5,000 above basic expenses to invest in their own futures?” The data is sobering: 66.9 percent of Latino families and 63 percent of African-American families have less than $5,000, and close to one-third of Asian-American and white-American families lack the necessary resources to invest in their futures. This lack of investment resources impedes the ability of a large portion of our population to access the opportunities that will improve themselves and their families.

Friedman outlines previous universal asset-building strategies and tools—from the Homestead Act to the GI Bill—with the caveat that many of those resources and strategies were kept from some groups of Americans, including women and people of color. Drawing from the experience of the GI Bill, he offers six useful lessons to instruct future Universal Asset Building policies, including:

A hand up—economic gains from the GI Bill were the result of self-directed efforts of individual beneficiaries.

Education, homeownership, and business—the GI Bill helped support investment in the economic engines of growth, and many of those who accessed that resource became stakeholders in their communities.

Return on Investment—the GI Bill represented a value-added investment that returned many more times the initial investment. The education investment from the GI Bill of $51 billion yielded $260 billion in increased economic output from those educated GIs, an additional $93 billion in tax revenue, as well as unquantified innovation, inspiration, and generational inheritance.

Though it was largely unavailable to women and people of color, the GI Bill came close to benefitting one-fifth of U.S. citizens and families, in essence showing the way for a universal policy for all Americans. So how do we move from successful savings policies and tools that have benefitted a small subset of the population to what Bob Friedman proposes as prosperity accounts?

Friedman introduces the concept of a prosperity account with many of the core concepts drawn from previous and current experience. The core elements include:

Changes to the tax code still bring me back to the 64-trillion-dollar question: how do we build a coalition to make prosperity accounts a compelling and core strategy for all of us to promote? As the book points out, the Homestead Act was launched during the Civil War by President Abraham Lincoln and the GI Bill in the aftermath of World War II, both devastating periods in our nation’s history. A major challenge today is to align collective will and connect with local and national community power to include prosperity accounts.

And how do we support a guiding coalition and major political champions needed to move this idea forward? There are some promising social movements emerging, a few of which are chronicled in Dr. Manuel Pastor’s book, State of Resistance. We must combine social movement and network power-building to bring political leaders and other influential stakeholders on board, who can then deploy the fiscal resources that will fuel individual engines of progress.

I hope our field will spring into action and move from comfortable “incrementalism” to a bold and systemic policy change that can begin to address the growing economic inequality that is tearing our society apart. This book offers the bold new ideas that will build upon past successes.