The book focuses on West Charlotte High School, a segregated high school in a segregated African-American community. Established in 1938, the school was headed by a strict but loving principal named Clinton Blake, and a determined corps of African-American teachers who worked assiduously to educate African-American students in what were inferior public school facilities. As one of the students put it, “We were separate but not equal. But I didn’t know it, and I’m glad they didn’t tell me.”

The teachers compensated for the unequal resources and students clearly appreciated their work as teachers and role models, but the community still wanted better.

In the wake of the Supreme Court decision Brown vs. Board of Education in 1954, North Carolina’s state and local governments placed the onus of integration on African-American families, who then had to apply to be placed in traditionally white schools. This stonewalling policy had its intended effect: a decade after Brown, the Charlotte-Mecklenburg school district had 57 all-white schools, 31 African-American schools, 15 predominantly white schools with some African-American students, and just 6 schools that were racially balanced.

In Charlotte, civil rights lawyer and future president of the NAACP Legal Defense Fund Julius Chambers sued on behalf of the Swann family, who had tried to place their African-American child in a white school. Federal judge James McMillan found that the Charlotte-Mecklenburg school district had to abolish its application system, and that it had an “affirmative duty” to integrate its schools. In 1970, the district established a busing plan that resulted in 43,000 students being bused throughout the schools in order to reflect the make-up of the district, which was 70 percent white and 30 percent African American. 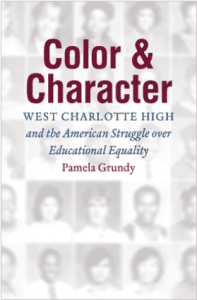 The burdens were still not equal. African-American students disproportionately bore the brunt of busing in terms of numbers of students and miles bused. Working class whites also bore an unequal burden. Affluent whites had more political power and were more successful in keeping their children in neighborhood schools. African-American teachers also sacrificed: they had made up 44 percent of the teachers in Charlotte-Mecklenburg schools in 1966, but were only 22 percent in 1969.

Years of unequal sacrifice in school integration prompted organizing. In a fascinating section of the book, African-American and white working class parents founded a community organization to demand a more equitable school integration plan. At the same time, enlightened members of the business community sought to lessen racial strife by supporting more equitable integration and supported a slate of pro-busing candidates to the school board. This resulted in a more equitable busing plan that involved more children from wealthy white neighborhoods being bused to traditionally African-American schools, such as West Charlotte.

As school integration took hold, the more even distribution of kids by race and class resulted in a more equal distribution of political power across schools in terms of resources and attention.

West Charlotte High School in particular benefited from this dynamic to such an extent that the achievement gap between white and African-American students narrowed. West Charlotte offered the widest range of courses and had the second lowest dropout rate in the district, despite relatively high poverty rates. (This is not to dismiss inequalities that started to manifest within schools as African Americans were disproportionately moved to lower-level courses.)

In 1984, President Ronald Reagan visited Charlotte and stated in a speech, “Forced busing takes innocent children out of the neighborhood school and makes them pawns in a social experiment that nobody wants.” The next day, the Charlotte Observer issued an editorial that said, “You were wrong, Mr. President. If you had talked to some of the good Republicans here you would have found that many of them are very proud of their public schools and would fight anyone— even you—who tried to destroy what this community has accomplished.” Indeed, the Charlotte-Mecklenburg district was the most integrated school system in the country by the early 1990s.

This experiment was hard to sustain. Over the decades, neighborhoods in Charlotte became more segregated due to a combination of urban renewal, displacement, and sprawling development. Residents of new segregated suburbs started complaining about longer bus commutes and expressed desire to build schools in their areas.

The school board migrated to a system of choice that allowed parents to choose magnet schools that strove for racial balance. In 1997, a white parent filed suit after her daughter was denied placement in one of the magnet schools. In 1999, the parent won the suit and the school board reacted by adopting a plan that basically ended school integration efforts. West Charlotte High School became 94 percent African American, and 56 percent of students qualified for free- or reduced-price lunch. In 1999, the school had the lowest test scores in Mecklenburg County.

Despite this gloomy denouement, Grundy offers some guarded optimism at the end. She discusses gentrification in the West Charlotte neighborhood as offering a glimmer of the possibility of integration (though she acknowledges the challenge of preventing gentrification from resulting in re-segregation). She describes how some longtime residents have formed community organizations to preserve housing for lower-income residents and thus economic integration. She states that public policy does not favor large-scale integration efforts, but that “if there is a place where it is possible to create a racially and economically integrated community, served by thriving, re-integrated schools, it should be the west side of Charlotte.”

Color and Character appeals to a wide variety of practitioners, from affordable housing advocates, neighborhood organizations, teachers, to child care providers. In addition to describing the strategies for achieving integration along with its obstacles, the book also raises important questions about whether racial and income integration is necessary for increasing school and neighborhood quality.

Though federal policy is unlikely to boldly mandate large-scale integration of our K-12 education system, if existing law is applied smartly, it can promote local efforts. In particular, the Community Reinvestment Act (CRA) should be used as a means of preserving integration in changing neighborhoods where it can make a difference in a few schools that can perhaps serve as inspiring examples.

As I describe in a previous blog post, the federal agencies advise banks that loans and investments in gentrifying neighborhoods can receive favorable consideration on CRA exams only if they benefit low- and moderate-income residents. In other words, if a loan or investment in housing results in evictions of lower-income tenants and converting rental housing to luxury condominiums, the bank will not receive CRA consideration. On the other hand, if the loan or investment preserved affordable housing for lower-income residents in a neighborhood undergoing gentrification, the bank would receive positive consideration on its CRA exam. But this guidance is not implemented often enough on CRA exams. Community organizations and advocates need to monitor and comment on CRA exams to ensure that pro-integration efforts receive consideration while bank financing of activities harmful to low- and moderate-income people are penalized.

The ambitious school integration efforts in Charlotte unraveled due to logistical and political challenges posed by sprawling development that was only exacerbated by housing segregation. Large-scale school integration will likely have the most chance of success in communities with higher degrees of residential integration, but achieving—and maintaining—neighborhood and school integration requires grassroots advocacy and pressure on political leadership from residents and civic and religious institutions.

If we do not try harder as a country to aim for integration and more opportunity for all of our people, we will continue to fall behind economically and as a cohesive community. Spiritually as well, we will be much poorer.