Inequality is worsening in America. It is one of our most intractable problems that will ultimately slow down economic growth and more immediately increase social tensions. Inequality will frustrate efforts to produce a workforce that can adapt in a rapidly automating and high technology world.

A country cannot function effectively if a small elite hordes wealth and knowledge while its middle class shrinks and the poorer become poorer and more disconnected from opportunity.

What can save us from this dystopia? Often overlooked in more mainstream discussions of inequality is just how much segregation has—and continues to—exacerbate inequality. Raj Chetty and his colleagues have conducted seminal research showing that poor kids will likely become poor adults if they grow up in segregated and impoverished communities. In contrast, their earnings and prospects improve dramatically if they grow up in integrated communities with better schools.

Richard Rothstein’s recent book, The Color of Law, graphically describes the laws and policies that created unequal and segregated communities. Starting in the New Deal era, the federal government intentionally segregated public housing. The Federal Housing Administration (FHA) then drew the infamous maps that described communities of color as higher risk and prohibited lenders from using FHA-insured loans to make loans to African Americans wanting to move into the newly constructed suburbs. African-American soldiers returning from World War II were unable to use the GI bill and federally insured loans to buy homes. As segregation became entrenched, white harassment and violence deterred most African Americans, except for a few brave pioneers, from living in the suburbs. 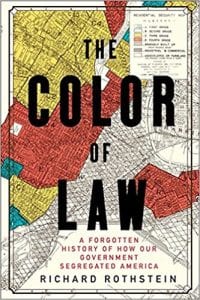 Rothstein discusses segregation and barriers to homeownership affecting other minorities like Hispanics and Asians, but suggests that legal segregation was most systematically employed against African Americans. This might be one area where I disagree with Rothstein. Our history is replete with atrocities committed against other minorities such as the genocide of Native Americans and the internment of the Japanese. Rothstein, however, effectively makes the case that the fight against segregation must be a national effort commensurate with the national sin.

Richard Florida picks up the analysis of segregation by highlighting its recent nature of exacerbating income or class segregation during the 2000s. In The New Urban Crisis, Florida describes a transformational trend of the “creative class” migrating into cities to work as lawyers, financial professionals, architects, and other white collar professions in the high technology, post industrial economies of large cities. He is a proponent of attracting the creative class into cities, not through the old and discarded notions of tax breaks for large corporations and sports stadiums, but through building infrastructure like mass transit to attract them. The creative class desire urban amenities and culture as well as the convenience of mass transit and living close to work. 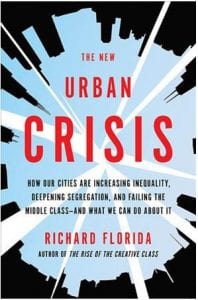 Florida’s new book is an atonement of sorts for his emphasis on attracting this subgroup of the American population. He acknowledges that this strategy can cause displacement associated with gentrification and can increase segregation. He presents a dizzying array of statistics and maps that show a worsening of economic segregation and increasing concentration of poverty across hundreds of metropolitan areas. He states that “Economic inequality grows worse as cities and metros grow larger, denser, and more clustered. This again is the very nub of The New Urban Crisis—the same factors that drive economic growth also drive inequality.”

The nation is beset with persistent racial segregation and increasing income segregation. Absent a redirection of public policy, inequality will worsen. Some will say that inequality is an unavoidable outgrowth of differences in talent and work effort. Sure, some merit-based inequality is an inevitable feature of human society. However, grinding and severe segregation of the sort detailed by Rothstein is the result of conscious and strenuous efforts by human beings to create unequal and segregated places. (If you remain skeptical of this thesis, I encourage you to read the stirring examples of segregation in Rothstein’s book as well as the segregationist policies and laws he describes at the local and national levels).

If it took massive human effort to create segregation, it will take strenuous human steps to undo segregation. Rothstein does not lay out specific policy approaches except to say that significant improvements are needed in our education systems to fully explain the nature of segregation in our curriculums. He is correct that better education will create a citizenry more informed about the evils of segregation. In this vein, the recent judicial decision prohibiting bans on ethnic courses in Arizona schools is to be much applauded.

Florida is more prescriptive in his policy prescriptions to harness the growth of the creative class and urban economies for combating segregation. Interestingly, Florida starts off his policy discussion by promoting a land value tax.

In this taxation system, the taxes on property are lowered and the taxes on the underlying land are raised. This system is designed to discourage speculation in which developers buy land and instead of building immediately wait for the market to soar. This speculation, however, increases sprawl and discourages denser development desired by the creative class. In particular, in areas around transit stations, land value taxes enable governments to recoup a portion of the wealth gains due to appreciation of land value.

Florida is also correct that a major impediment to affording housing is low wages, and he appropriately calls for an increase in minimum wage. As described by a recent Washington Post analysis, the federal minimum wage has eroded significantly in the last couple of decades and there is ample room to increase it in order to place the United States on par with the minimum wages of other industrial countries.

Florida, however, goes off the rails when he argues against homeownership in his promotion of rental housing. In a mere couple of pages that do not leave room for informed analysis, he states that “continuing unfair subsidies to single-family homeowners only encourages sprawl” and that we need to focus the subsidies on “less advantaged renters.” The kernel of truth in these statements is federal mortgage tax deductions have disproportionately favored the rich (though the recent tax bill curbed those excesses by lowering the limit from $1 million to $750,000 mortgages). However, Florida tends to oversimplify and make it appear that housing policy can only be bipolar—supporting homeowners or renters. But it can support both.

Moreover, not all forms of homeownership contribute to sprawl. The rowhouse or multi-unit co-op/condo does not exacerbate sprawl, but instead contributes to lower housing turnover and more committed neighbors. A blanket denigration of homeownership is counterproductive in that it makes it much more difficult for African Americans and other groups that were victims of discrimination the opportunity to buy and own homes. Denigrating homeownership defangs a major means to combat inequality.

Purposeful integration must be enacted on a much larger scale than ever before. The judicial decision in recent days ordering Trump’s Department of Housing and Urban Development (HUD) to leave in place a pro-integrative voucher formula for Section 8 recipients is vitally important. The federal government must promote the ability of low-income recipients of rental subsidies to find housing in higher opportunity neighborhoods with decent schools.

In addition, the Community Reinvestment Act (CRA) can be applied in a more creative manner to promote the development of modest income housing in middle- and upper-income neighborhoods. Banks can receive points on their CRA exams for participating in the inclusionary zoning programs of local jurisdictions under which developers must build a certain amount of low- and moderate-income housing units in their developments. Inclusionary programs work particularly well in booming metropolitan areas with large portions of Florida’s creative class.

But the policy prescriptions outlined will not be enough to promote the level of integration needed to significantly diminish inequality. Bold action must be taken and sacrifice will be needed. Rothstein could be correct that large-scale integration efforts may reduce the property value increases that more affluent communities usually experience. And large scale efforts may also place limits on school choice for some families.

Florida mentions that he advised Martin O’Malley’s presidential campaign, which was the only one to discuss urban economic development. We will need more candidates for elected office, and more social movements, to discuss issues of integration and inequality in thoughtful and practical ways.

Despite what’s best, our country is neither in an intellectual or moral place to willingly accept large-scale integration. Hence, Rothstein’s emphasis on civic education is needed. And we must continue with pilot programs and local examples of inclusionary zoning that work and demonstrate the value of integration.