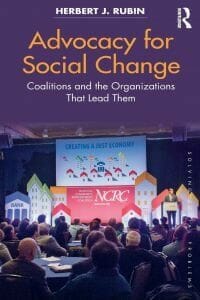 Herbert J. Rubin’s new book, Advocacy for Social Change, is an important primer for those who seek to promote social change through national organizations. Many books discuss the corrosive effect of money in politics and lobbying organizations, but few are devoted to how those representing the have-nots organize on a national level to fight for laws and regulations that seek to empower communities.

Rubin calls national coalitions seeking change “focal catalytic coalition organizations” or FCCOs. While this may sound like academic jargon, it accurately describes the mission, strategy, and tactics of national coalitions. Rubin focuses on two organizations, the National Community Reinvestment Coalition (NCRC), where I work, and the National Low Income Housing Coalition (NLIHC). An FCCO identifies a focal or “signature” issue and catalyzes local community-based organizations around the country to effectively advocate for the issue. In NCRC’s case, its signature issue is the preservation and strengthening of the Community Reinvestment Act, (CRA) while in NLIHC’s case, it is promoting policy that preserves affordable housing for low- and very low-income households.

Rubin comprehensively covers the tools and tactics that NCRC and NLIHC employ to promote their issues, reviewing technical methods such as how to gather data and persuasively present it to legislators and regulators. He shows how NCRC and NLIHC teach their member organizations how to present their perspectives to policymakers by using data in sample comment letters. He details teaching moments during conference calls and at annual conferences.

Along with explorations of such techniques, sections of the book describe issue framing and the myth-busting that FCCO’s must deal with regularly. A false claim that NLIHC once confronted was that a National Housing Trust Fund was not needed because existing Department of Housing and Urban Development programs already funded rental housing, and that the free market would take care of housing for the poor. NLIHC had to continually beat back these claims, asserting that the trust fund would target rental housing for those in extreme poverty, a population that existing programs did not address, and that without subsidies the market would not produce adequate housing for this population.

During the financial crisis, NCRC had to battle the myth that the Community Reinvestment Act caused the crisis by encouraging banks to make loans to financially unqualified borrowers. However, the CRA statute mandates that banks must lend consistent with safety and soundness. Moreover, numerous Federal Reserve studies concluded decisively that bank loans to modest-income homeowners had statistically significant lower default rates than loans made by non-CRA covered mortgage companies. Despite what should be definitive defenses against the myths, the big lies persist and will always be dragged out to present obstacles to economic justice.

Mobilization and morale boosting are also persistent needs that a FCCO must address. An extreme understatement is that this work is hard and achieving long-lasting change is challenging. NLIHC achieved its objectives, but the actual start of the trust fund was delayed for a number of years due to the financial crisis, all while opponents kept making attempts to weaken or eliminate it. Likewise, NCRC achieved victories in the Dodd-Frank Wall Street Reform and Consumer Protection Act by securing provisions that would provide more detail regarding borrower demographics and loan terms and conditions in the publicly available data on home and small-business lending. Yet, several years after passage of Dodd Frank, the new data is not yet publicly available and attempts to water down the data requirements emanate from Congress and new agency heads appointed by the Trump administration.

In addition to large sweeping legislative or regulatory changes, FCCOs must keep their eyes on annual and achievable victories to demonstrate to their membership base that the cause of economic justice advances. Beating back threats to annual Section 8 funding is a morale boost for NLIHC members. Securing multibillion dollar commitments to lend and invest from banks when they seek to demonstrate public benefits of their mergers likewise energizes NCRC member organizations, and leverages financing for affordable housing and economic development in their communities.

Rubin is astute when he observes that attention to nuance and minutiae can also be key to achieving significant victories. A placement of a comma or an assertion or deletion of a word in pending legislation can have significantly positive ramifications for communities. Likewise, how CRA regulations influence the scope and reach of CRA examinations can profoundly influence how many loans, investments, and services flow to low- and moderate-income communities. Not only must a FCCO navigate nuance, it must communicate the critical importance of it to its member organizations.

Lastly, Rubin does not shy away from discussing how FCCOs must navigate conflict within their membership in such a way that keeps them together and united for the fight. At NLIHC, such conflicts must be negotiated between tenant rights organizations and public housing agencies. At NCRC, these conflicts can occur over issues of preemption, such as when Congress is considering national consumer protection or anti-predatory lending legislation that is better than one member’s weak state laws, but would override another member’s stronger state laws. Again, it is the signature issues that often provide the glue that holds the coalitions together at these moments, as the FCCO will strive for compromise while reminding members of the larger mission and goals that unite them.

All of this work is incredibly hard, and it is all the more remarkable that FCCOs have survived and thrived over the decades in the face of opposition with exponentially greater resources. Rubin, an author and retired sociology professor at Northern Illinois University, endeavors to produce a primer that shows how FCCOs can persevere and grow. His book is a valuable contribution to the field, and one we can all learn from.