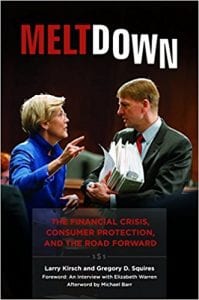 With Meltdown: The Financial Crisis, Consumer Protection, and the Road Forward, Larry Kirsch and Greg Squires provide a valuable service in documenting how and why the Consumer Financial Protection Bureau (CFPB) came into being to protect consumers from financial exploitation and how it was envisioned as a key agency in preventing another financial catastrophe. This book is the first of this type and hopefully sets a trend for evaluating the new federal oversight established after the Great Recession.

Kirsch’s and Squires’ book could best be described as a documentary-style political economy of the financial crisis and subsequent policy responses. They describe the genesis of the idea for the agency (a white paper by senior Obama White House staff led by Michael Barr), the economic motivations for the agency, the politics propelling and also inhibiting the agency, and key players including Richard Cordray, former “Jeopardy” champion and first agency director. The book ends with two case studies illustrating the CFPB’s approach, success, and limitations.

When Bill Clinton ran for President in the 1992 election, the campaign’s motto was “It’s the Economy, Stupid!” and a recession on George Bush’s watch would help convince people to vote for Mr. Clinton. Similarly, the motivation for the CFPB can be described as “It’s the financial crisis, stupid.” A financial crisis that resulted in $20 trillion in lost household wealth and 9 million lost jobs would prompt policymakers to try new approaches to protect our economy and consumers.

In this case, the regulatory system was broken. Regulation of the financial industry was scattered among several agencies that were mostly devoted to preserving the financial health of the industry and thought about consumer protection as their third or fourth priority. What they did not realize was that consumer protection ultimately preserved the safety and soundness of financial firms, because financial firms cannot be stable and profitable if consumers cannot repay their loans. High levels of defaults and foreclosures will hurt industry’s bottom lines and in severe cases, bring the industry down. Abusive lending was so widespread that major firms went bankrupt, threatening the solvency of the entire financial system.

Leading up to the crisis, financial firms became adept at gaming the system and seeking the easiest regulator. They would “charter shop” and sign up for oversight under the agency they thought had the lightest supervisory touch. Several firms even decided to be non-banks in order to largely evade federal oversight.

The result is what Senator Elizabeth Warren describes as better oversight of toasters than financial firms:

“It is impossible to buy a toaster with a one-in-five chance of bursting into flames and burning down your house. But it is possible to refinance an existing home with a mortgage that has the same one-in-five change of putting the family out in the street – and the mortgage won’t even carry a disclosure of that fact to the homeowner. The difference between the two markets is regulation.” (p. 4)

The scattered enforcement of consumer protection and fair lending laws across several agencies would end. The CFPB would have broad oversight over banks and non-banks, and this model has produced impressive results, as documented by Squires and Kirsch. Since its inception, the CFPB has recouped $11 billion in compensation for 25 million borrowers that had experienced various abusive and illegal practices.

In the most compelling part of the book, Kirsch and Squires review how the CFPB created strong rules regulating the mortgage market and why it was less successful in the automobile market. For mortgages, the financial industry was on its knees, politically and economically, with their reputations and bottom lines in tatters. The Dodd-Frank law mandated uniform regulations requiring that the industry consider borrowers’ ability to repay. Yet, promulgating rules was a tricky balancing act, promoting access to mortgages for wide segments of consumers while requiring sound underwriting. The result of this balancing act was the Qualified Mortgage (QM) rule that provided some protection against liability for the industry if the industry made mortgages that avoided certain abusive features like high levels of debt (debt-to-income ratios above 43 percent).

The CFPB avoided including requirements for high downpayments in the QM rule that would have choked off access to mortgages for a sizable portion of the modest income population. The CFPB also astutely took advantage of some collaboration among consumer advocates and industry in creating a rule that achieved some consensus among stakeholders.

The CFPB foray into oversight of automobile lending was not as successful. Automobile lending was not a cause of the financial crisis, meaning that the automobile lobby retained its clout as a powerful lobbying force on Capitol Hill. The automobile lobby successfully exempted itself from direct supervision by the CFPB, one of the few groups of lenders that were “carved out” from CFPB oversight. As a result, abusive and discriminatory practices abound, with lending institutions giving automobile dealers wide discretion to charge brokers fees for arranging loans for customers. In many cases, this discretion resulted in dealers charging similarly qualified minorities higher fees than white customers.

In the absence of direct oversight of the industry, the CFPB used its indirect enforcement authority over the industry in the form of pursuing charges of discrimination in violation of the Equal Credit Opportunity Act (ECOA). The CFPB hoped that some high profile settlements would discourage abuses in discretionary pricing. However, these settlements were unable to achieve uniform practices across the industry because the fragmentation in the industry allowed large number of dealers and lenders to ignore the settlements and proceed with business as usual.

In fact, the lenders that entered into settlements were the ones often at a competitive disadvantage. The political power of the industry also deterred aggressive enforcement when members of Congress pushed backed against the CFPB’s enforcement actions against automobile lenders.

Kirsch and Squires discuss how lack of data impedes solutions to eliminating discrimination in automobile lending. They state, “What their [settlements] impact will be on loan rates for racial and ethnic minorities in entirely unknown.” In order to generate data and analysis to determine impacts, Kirsch and Squires recommend a “collaborative research platform” developed by the CFPB working with industry for better understanding automobile lending. They suggest that this approach may have been more successful than an enforcement-first approach regarding automobile lending.

The notion of collaborative research is appealing but perhaps unattainable. Asking an industry, particularly a segment that is so strong politically, to voluntarily share data may be naïve. One Dodd-Frank Act rule is a provision known as Section 1071, which requires lending institutions to disclose the race, gender, and other characteristics of borrowers of small business loans. A public comment period regarding a CFPB request for information about small business lending just ended. The industry commented en masse, opposing a comprehensive data collection requirement, meaning they either do not want to be held accountable and/or do not want to use additional resources to collect and report data. While this position is disappointing, it is perhaps understandable from a business standpoint, thus, strong statutory mandates and a strong agency is needed to implement rigorous rules. Congress set up the CFPB to do this well in mortgage lending, but no so well in automobile lending.

A final area that has been impeded over the years by decentralized regulation is the Community Reinvestment Act (CRA). Early drafts of Dodd-Frank included moving CRA oversight and examination from the bank agencies to the CFPB. NCRC testified before the House Financial Services Committee in strong support of moving CRA oversight to the CFPB. We were told by key members of Congress that the community bank lobby was adamantly opposed to this. They resisted because they preferred the cozy oversight of the current agencies who give out passing ratings to approximately 98 percent of banks.

Since there is a community bank in virtually every Congressional district, our efforts to support moving CRA to the CFPB did not succeed to the overall detriment of low- and moderate-income communities. Not only would the CFPB likely be a tougher grader, the agency could also implement long-overdue reforms to the CRA regulation since it is much easier for one agency to act than to derive agreement among three bank agencies for CRA reform.

In sum, Kirsch and Squires have written an insightful book that documents an important phase of an agency’s history; that is, how the agency came into being, and its institutional strengths and weaknesses. It provides valuable lessons for the CFPB’s growth as well as providing suggestions about how to create future initiatives like this from scratch.