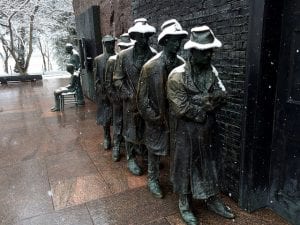 Last week, Speaker Paul Ryan brought a FY2018 budget resolution to the House, which passed. It had passed out of the Budget Committee back in July, but far-right lawmakers wouldn’t support a floor vote until they received more details on President Trump’s long-touted tax “reform.”

A tax framework was released in late September, so House Republicans are now primed to vote on the budget and set the budget reconciliation process in motion, which, if successful, will allow Republicans in both chambers to pass a joint budget by simple majority, skirting the threat of a Democratic filibuster. As unfair as all this may sound (explainers here, here, and here), it’s all technically permissible under legislative procedure.

Though the framework seems to have satisfied the Freedom Caucus (temporarily), there is considerable disagreement as to whether or not the White House’s nine-page framing document on taxes actually clarified much of anything. Trump and his various surrogates have done an awful lot of lying in the meantime—about who benefits, who doesn’t, and by how much—and no one seems to know how, exactly, the Congressional majority intends to pay for the trillions of dollars in tax cuts for which they’re calling. It seems to involve a fair amount of magical thinking. Well, magical thinking, and shanking the poor. That much was clarified: The poor will, of course, be shanked.

Tax brackets, tax breaks, and just how much more rich the rich will become are all important details, no doubt, but among those details runs a single, shining, unifying message: Some people are worth investing in, and some are not.

Every budget answers a question: Given a finite amount of treasure, on whom is it best spent? Should we, as a society, give $125 a month in food to people who can’t find a job, work in poorly-paid industries, or have fallen ill, or put an extra $129,000 into the pockets of people who make three-quarters of a million dollars a year? What’s better: Putting money into education initiatives and loan forgiveness programs that give those in poverty a tool with which to try to escape poverty, or helping the wealthy protect their wealth in off-shore tax havens?

Even for Trump and Congress, the calculus on who makes the cut is complex. It’s informed by race, by gender, by existing wealth, by proximity to power, by actual power. It’s informed by pettiness and greed. But at the end of the day—at the end of every single day—we still have a choice. The divide between poverty and wealth is a choice made by Americans who have arrived at a judgement about the fundamental worthiness of the lives of other Americans.

Contrary to how we usually discuss it, poverty is not a condition—it’s not dandruff, or cancer. Poverty doesn’t just appear at random, nor is it part of the natural order. Poverty is a choice, a series of choices, made and compounded across generations, by human beings. And as that choice is made by one group of people about another group of people, poverty is ultimately a relationship. It is a direct outcome of how humans with power choose to relate to other humans.

The Ryan budget and Trump tax plan are blunt instruments with which to cement and extend the existing relationship between the extremes in American society—and the extremes are already more extreme than they’ve been in generations.

About a week before Trump unveiled his tax plan, the founder and chairman of Bridgewater Associates, the largest hedge fund in the world, made a startlingly frank comment about income inequality: At a fundraiser for Grameen America, Ray Dalio said that the United States effectively has two separate economies, and “the greatest issue of our time is the disparity of wealth and the problems that exist for the lower 40 percent of the population.”

Just days after Dalio made his comments, the Federal Reserve released a report about that very disparity, finding that the top 10 percent of American wealth holders already control 77 percent of the nation’s wealth. The top 1 percent of families control 38.5 percent.

Much of human suffering is beyond human control: Hurricanes and heartbreak will always come, no matter what we do. But poverty is a human relationship, in which humans decide who to value, and in whom to invest. Humans decide if the rich are going to get richer as the poor get poorer.

For all the commotion and legislative jargon currently swirling around the Congressional budget and tax plans, it’s important to remember that the poverty enshrined in both isn’t inevitable. It’s just that the wealthiest and most powerful people in America are doing all they can to ensure that people in poverty stay in their place.

A version of this piece originally appeared on TalkPoverty.org, and is a collaboration of the Economic Hardship Reporting Project and TalkPoverty.org.