At a recent panel at the Center for Community Progress’ Reclaiming Vacant Properties conference in Baltimore, I asked the audience, “Who’s heard that scattered site development doesn’t work?” Most raised their hands. But once they learned about the West Philadelphia Scattered Site Model, they were talking about how they could try the model back home. Why? Because our study showed that this scattered site model is a cost effective method to create affordable rental houses that makes twice the positive impact on the surrounding neighborhood as single site new construction.”

Two Approaches to Increasing the Supply of Affordable Rentals and Removing Blight: 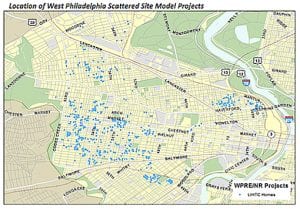 Step 1: Buy Vacant Houses
Acquisition of vacant houses is the critical first step. For the most part, these are row house shells that have been abandoned for more than 10 years. Early on, WPRE/NR focused on acquiring properties on stable blocks that contained just a few vacant properties. When properties on these blocks were mostly redeveloped, WPRE/NR tackled blocks with multiple vacancies, ensuring acquisition of a sufficient number of these properties to stabilize the block. Over the years, WPRE/NR purchased these abandoned homes for a range of prices including $1 for city-owned properties, below market value bids at tax sales, and market value for privately owned listed properties. The average cost paid for the scattered site vacant housing units from 1989 to 2015 was $13,380, adjusted for inflation to 2015 dollars. Under the West Philadelphia Scattered Site Model, abandoned homes are purchased with an acquisition line of credit. The acquisition line is paid off once the developer breaks ground on the project and obtains a construction loan.

Step 2: Apply for and Receive LIHTC
WPRE/NR has applied for and received LIHTC support for 24 scattered site projects since 1989. The smallest project, in 1991, helped to fund the redevelopment of 10 units-six single-family homes and two duplexes. Two of the largest projects, in 2004 and 2006, funded the redevelopment of approximately 80 single-family homes each. In order to create a viable LIHTC project, an investor, typically a company, is identified that wishes to take advantage of tax credits. Prior to submitting a LIHTC application, WPRE/NR purchases a certain number of properties and obtains private construction and permanent financing to leverage the money allocated from LIHTC to redevelop as many new affordable rental units as possible. With site control of multiple abandoned properties clustered in the same area and with private financing, WPRE/NR next applies for LIHTC financing. If WPRE/NR’s project is selected by the Pennsylvania Housing Finance Agency to receive tax credits, the investor partner who receives the tax credits typically pays the present-value of the LIHTC credits over a period of time. These funds are then used by WPRE/NR for construction and development of the scattered site units.

Step 3: Rehabilitate the Houses
WPRE/NR performs gut rehabilitation on the abandoned shells that they acquire, completing about 60 homes per year or five homes per month. They strip the houses to their bare bones and build them new on the same footprint and with the same square footage. Often, the only original features that remain are the exterior walls. In each home, WPRE/NR provides all new plumbing, wiring, roof, floors, studs, and walls. WPRE/NR hires a general contractor to perform the rehabilitation work. The general contractor must provide documentation that they have at least 50 percent minority employees and at least 50% local resident employees. Since 2008, WPRE/NR has used sustainable building practices to ensure each home receives LEED certification by the U.S. Green Building Council, and Energy Star certification by the U.S. Environmental Protection Agency. This ensures that all houses are energy efficient and utility costs are reduced to increase the home’s affordability. It also contributes to making each home warm, safe, and dry and lowers indoor air pollutants. Since 2004 WPRE/NR has provided each tenant with the ability to obtain free supportive services from the Public Health Management Corporation including:

Since 2004, 10 percent of homes rehabilitated have been made accessible for persons with disabilities.

Step 4: Lease and Maintain Homes
To qualify to rent a house, tenant households must have incomes at or below 60 percent of area median income. Most WPRE/NR properties offer three bedrooms, a basement, and a small yard. In the first 10 years, almost 90 percent of tenants had Section 8/Housing Choice vouchers. In 2015, only 40 percent of tenants used a Section 8 voucher, and the other 60 percent were able to pay the affordable market rents without assistance. WPRE/NR has created a property management program designed to provide quality, affordable scattered site housing to responsible tenants. Tenants sign a 1-or 2-year lease but tend to stay 3.5 to 4 years. An affiliate of WPRE/NR, Prime Property Management, leases and manages the units. Since 2000, the average maintenance cost per unit has been $1,200 per year. Operating expenses average $3,380 per year for each unit and include debt service, insurance, legal and professional fees, advertising, and taxes. Prime Property Management is responsible for fixing all systems within the house and the home’s structure. Prime Property Management has a full time staff of 16 employees. Half of these employees perform maintenance on houses, while the other half provide administrative support. Almost 90 percent of Prime Property Management employees are minority and live in Philadelphia, with about 70 percent living in West Philadelphia. The most common maintenance requests from tenants are plumbing issues and help getting into their locked unit when a tenant loses a key.

What is the Revitalizing Impact of the Scattered Site Model in West Philadelphia? The West Philadelphia Scattered Site housing model had a significant revitalizing impact on its surrounding neighborhoods. In fact, the study found that the scattered site rehabilitation model had twice the positive impact on the surrounding neighborhood as single site new construction. Property values are a good measure of overall neighborhood impacts because they show the willingness of homeowners or investors to pay for neighborhood attributes. 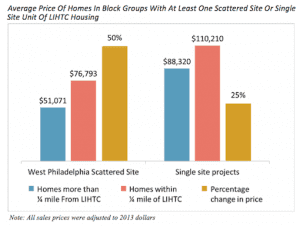 Twenty West Philadelphia Scattered Site units have the same positive impact on the surrounding neighborhood as forty single site units. The study found that a smaller number of LIHTC scattered site units has a greater positive impact than a comparable number of single site development units on surrounding homes values. The size of the impact varies depending upon the concentration of LIHTC units around a home. For example, a small scattered site project that placed 10 LIHTC units in a concentrated area would improve home values by 7.8 percent, whereas a similar sized single site development would only improve home values by 4.5 percent. As the next graphic illustrates, scattered site units provide a larger boost to local property values than a single site development because they impact a larger geographical area. Where the primary benefit to neighborhood conditions occurs within roughly a quarter mile from each rehabilitated property, each scattered site unit impacts the quarter mile surrounding it, whereas single site developments impact just a single quarter mile radius. The impact of both West Philadelphia Scattered Sites and single site projects reach a tipping point before their relative effect on home prices begins to decline. The results suggest that WPRE/NR scattered site rehabilitation has a maximum impact at 21 units, improving nearby home values by approximately 10 percent. Beyond 21 units, West Philadelphia Scattered Site projects begin to have diminishing positive benefits. On the other hand, single site projects require 42 units to boost property values by approximately 10 percent, after which additional units have diminishing positive benefits. 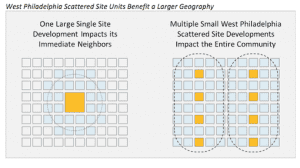 West Philadelphia Scattered Site units cost 24 percent less than single site new construction and 27 percent less than other rehabilitation. Reinvestment Fund compared the relative cost effectiveness of the West Philadelphia Scattered Site model with other Philadelphia LIHTC developments constructed between 2005 and 2007. The analysis found that the scattered site rehabilitation model was more cost effective, even though the rehabilitation process is less predictable and more challenging due to housing stock that varies in age, condition, and construction methods. 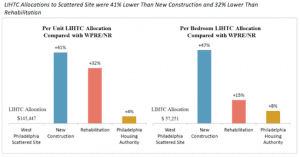 Conclusion: This study strongly suggests that it is time to take another look at scattered site rehabilitation as a cost-effective model for reactivating vacant properties and creating needed affordable housing.