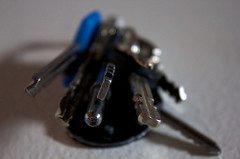 Periodically in the affordable housing world, a few of us acknowledge the fact that the vast majority of low-income people live in unsubsidized rental units located within one- to four-unit buildings. And then we ask, how do we improve the quality of these homes and preserve their affordability? What programs could help these landlords and also help their tenants?

The conversations I’ve heard have mostly focused on the financing and capital investments side, but a panel I attended about rapid rehousing last week at the National Alliance to End Homelessness conference made me wonder about support on the operations side as well.

Rapid rehousing is part of the growing housing-first approach to homelessness, which stipulates that stable housing is the first step toward dealing with homelessness, not the last. A rapid rehousing program helps with housing location, provides financial assistance for a short period of time (often four to six months), and case management. They tend to be run by nonprofits, using a combination of public and private funding.

Why would a landlord want to work with such a program, especially since the rents are generally limited to the fair market rent?

The presenters (Zachary Brown, WV Coalition to End Homelessness; Ben Catell Noll, Friendship Place; Beth Fetzer-Rice, Salvation Army in Central Ohio; and Michael Shore, HOM Inc) had a number of potential answers. Along with giving the feeling of doing something good and being part of something larger (which they absolutely worked), they said, the programs can provide some other benefits that landlords, especially smaller ones, often appreciate:

Noll reported that in a recent survey, 80 percent of the landlords his organization works with in the D.C. metro area said being part of the programs was good for their bottom line.

In talking with other people at the conference, it seems, unsurprisingly, that these things are not always enough, especially in the hottest market areas with rising rents, to entice all landlords, but they do carry some appeal even in some fairly low vacancy areas.

I’ll admit after reading Evicted I was in no mood to be sympathetic to the landlords raking in profit by renting to the poorest of the poor, using tenants who were behind on rent to get away with keeping apartments in terrible condition and bouncing families out the door for the slightest reason.

Nonetheless, I know there are good landlords who would not only welcome being part of such a program, but who might get a bit of needed financial stability and the ability to invest in their apartments. It seems like it could be one part of an answer to that question being asked in a different part of the field about supporting this form of affordable housing, and a good example of how the homelessness services sector and the affordable housing and neighborhood revitalization sectors could benefit from more interaction.

If so, could those other sectors bring some of their tools, skills, and resources to bear? For example, if new programs were instituted to allow for rehab money to get distressed apartments into better shape (including, for example, dealing with lead hazards) in exchange for participation in a program such as this, perhaps we might be able to hit several birds with one stone? It seems there could be many possibilities.

Bordering Towns in LA County Clash Over Their Homeless Policies