Along with most Shelterforce readers, I have long believed that having some portion of a community’s housing as long term or permanently affordable is a desirable policy goal. That said, I think it’s time to ask some serious questions about the best way to actually pursue that goal, and whether the default answer of the community development field, which is “build it,” is the right one. We don’t have to only talk about hypothetical alternatives—a compelling one already exists, in France. The comparison, in my opinion, is instructive.

About eight years ago, when Nico Calavita and I were writing a book about how different countries around the world pursue inclusionary housing, I spent a few weeks in France talking to developers, nonprofits, and public officials about how they “did” affordable housing. It’s well known that from the 1950s through the ’70s, France built huge public housing projects, a lot of them on the outskirts of major cities, only to see many of them turn into social nightmares. In the years since, despite innumerable reports and inquiries, and the expenditure of billions of euros, matters have not significantly improved.

The French, however, learned some lessons from this experience. As a result, they came up with a very different approach.

Now, when French developers build subdivisions or condo projects, nonprofit housing corporations enter into turnkey contracts with the developer to buy blocs of apartments or houses, up to a maximum of 50 percent of the units in the development. Based on those contracts, the nonprofits apply for a package of government loans, grants, and tax breaks so they can both buy the units and make sure they remain affordable. When the projects are completed, the nonprofit buys the units and operates them as affordable rental housing. The developer of the project pictured on this page, which is in a small city in Brittany, France, sold half of the units to a nonprofit housing corporation for social rental housing. The other half were sold to homebuyers at market rate.

On top of that, the government also provides tax incentives for mom-and-pop owners to buy condos and rent them at rents affordable to middle-income renters; it also offers combinations of tax incentives and zero percent second mortgages to enable moderate-income families to buy homes and condos in the same developments. These programs are described further in the book Calavita and I wrote.

Under the French approach, developers do what they do best—build housing—and the housing programs and affordable housing providers take it from there. As a result, a lot of French housing developments contain a mix of both market-rate and subsidized rental units, and both market-rate and subsidized owner-occupied units. We could learn something from that approach, both from the standpoint of efficiency, and perhaps even more, from the standpoint of providing mixed-income housing opportunities, as well as further fair housing and offer greater opportunities for lower-income families to move out of concentrated poverty areas into areas of greater opportunity.

A fact that is widely known but little discussed in the housing industry is that many market developers create a decent product for a lot less than the Low Income Housing Tax Credit projects being built in the same area. There are some differences in materials and finishes, but that doesn’t account for most of the cost difference. Even in relatively low-cost areas like Arizona, unit costs on most new LIHTC projects run $200,000 to $250,000 and up, but developers in Phoenix are selling brand new 2,000-plus square foot, three-bedroom, two-bath houses for well under $200,000. Market discipline is a powerful force, and its value should not be underestimated.

At the same time, most parts of the United States have large inventories of good-quality existing housing available. A recent Zillow search came up with over 1,000 houses offered for sale in Phoenix at prices under $200,000. Housing prices in Phoenix, however, are considerably above the national average. In the fall of 2015 (again from Zillow), the median sales price in Dallas was $132,500, Columbus $118,000, Tulsa $107,400, and so on. These are not low-end prices; they are citywide medians. And these are not low-end, low-value cities, but cities with functioning, growing economies.

If nonprofit housing providers could use LIHTC funds to buy blocs of units from developers, or buy existing homes on the private market and turn them into long-term affordable rental housing, the amount of affordable housing that could be created would be far larger than under the current system. We would save billions in construction and transaction costs, not to mention the cost and psychological wear and tear of keeping planned projects alive year after year while putting together ever more complicated subsidy-layering schemes. As a result, we could dramatically reduce the multiyear lag from when a project is first conceived to when the first tenants move in.

Of equal or perhaps greater importance is that such an approach to providing affordable housing offers a way to further fair housing and help families move into areas of opportunity that could be executed far more simply and benefit far more families than the current approach, which is that of a never-ending, one-project-at-a-time struggle by developers and nonprofits to convince suburban municipalities either to rezone land for LIHTC projects or eliminate other obstacles to their construction. Even in states like New Jersey, where fair share laws theoretically mandate suburban affordable housing, it is a difficult, expensive struggle where each project is a major effort and each approval a major victory.

The great majority of LIHTC projects are located in the lowest income, weakest market sections of each metropolitan area—the low-value, high-poverty areas. Almost all of the LIHTC projects in the Rochester, New York, area, for example, are in places with poverty rates of 40 percent or more. One can find similar patterns in most other metropolitan areas around the country. While a few of these projects may be contributing to the revival of those areas, many are there because it’s the path of least resistance for those seeking to develop LIHTC housing. Meanwhile, good houses in solid neighborhoods, both urban and suburban, are available at far less cost.

This is not to suggest that we completely stop building new purpose-built affordable housing projects. Rather, that we build a lot less, and utilize the skills of private developers and the resources of the existing market a lot more. This approach might not be the best strategy in every area, nor in every situation. There are some circumstances where an LIHTC project can actually make a real difference in the revitalization of a struggling urban neighborhood, although those circumstances may be rarer than often claimed. There are also a few places in the United States, like San Francisco and Washington, D.C., where high-end demand has pushed the market to levels where these strategies would be too expensive, and where conventional LIHTC projects, even if they cost $300,000 or more per unit (which they do), are still likely to be a good deal. In these areas the struggle to build LIHTC projects in high-opportunity areas is still worth undertaking. These areas, however, are the exceptions.

Sadly, the LIHTC program currently cannot be used to buy houses in good condition—whether existing or newly built—and virtually no other money is available for that purpose. As a result, one must acknowledge that community developers may be doing what they can with the tools they have. They may not, however, have the right tools.

The LIHTC industry is a multibillion dollar business, with all of the vested interests that are inevitably associated with any such business. But affordable housing is not just about business interests. Instead of continuing to use these tools, knowing how deeply flawed they are, community developers should be thinking and talking more about whether these programs really make the most sense for the millions of families who not only need better housing, but deserve the opportunity to live in better neighborhoods. I would suggest then that we have an ethical obligation to advocate for those policies that can lead to more affordable housing options and greater opportunity for America’s lower-income households. Ultimately, it is on their behalf that we work. 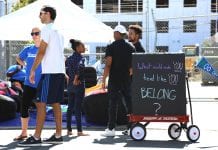