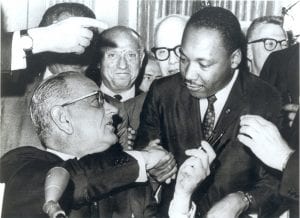 Martin Luther King, Jr. was killed in 1968 while in Memphis supporting striking sanitation workers. Up until that time, he’d spoken about the dignity of all labor and the necessity of fair wages. He’d also begun to explore how the civil rights movement was becoming a human rights movement, and linked it to the struggles of the voiceless, and usually, poor people throughout the world. It goes without saying that Dr. King’s work—his strategy as an organizer, his ability to at once convey the struggle of America’s marginalized while catalyzing that same group, and his ability to turn outrage into action steps continues to inspire people in all facets of the social justice movement. The movement that he has become the face of remains the largest grassroots social movement in modern history, and on many levels, most of us wish we could recapture the spirit of that movement to further the work we do today.

In remembrance of Dr. King, we share the following excerpt of a speech he gave in support of the striking Memphis sanitation workers, who ultimately won their battle with the city after a three-month long strike and a silent March of over 42,000 people, led by Coretta Scott King only four days after her husband had been killed:

Renewing Bonds: Why the Housing Movement and Organized Labor Need Each Other, by Peter Dreier, May, 2000.

Moving Out of Poverty, by Harold Simon, October, 1999