The U.S. immigrant population is expanding, driving population growth in the Sun Belt, Pacific Northwest, and Mountain States and helping to slow population decline in Middle America. Immigrants—meaning people born abroad not of American parents nor in the U.S. territories— now live in virtually every city in America, where they contribute to the local economic vitality by paying taxes, creating businesses, stimulating consumption, and meeting labor demand. But this population is not a monolith. Digging deeper into the data to learn what countries they come from, where they live, and the characteristics of their households can help us craft immigrant-conscious policies and programs to foster the well-being of immigrants—and the communities they live in.

Policy Background
Immigration has come to be one of the most debated policy issues of the last decade, and one of the most politically divisive. Immigration policy determines who enters the country under what terms and the penalties for those who violate immigration laws. It assigns immigration statuses determining, for example, access to employment and government benefits or the ability to bring family members from abroad. Some scholars have argued that immigration status is the new axis of stratification in contemporary American society.

Since 2006, there have been several efforts to reform the immigration system, but no major immigration bill has been passed by Congress. In the last decade, most actions affecting immigration have been administrative rulings and presidential executive actions: extending the period foreign students in certain occupations can stay after graduation, addressing prevailing wages for temporary agricultural workers, and, most recently, President Obama’s extending a stay of deportation for certain undocumented child arrivals and parents of children born in the United States.

In the meantime, communities across the United States are increasingly seeing immigrants as assets. While immigration policy is the realm of the federal government, state and local areas can craft strategies that support immigrant integration. According to the 2013 Immigration Report from the National Conference of State Legislatures, after 2012, many states shifted from a focus on enforcement measures to expanded benefits for immigrants. By June 2014, 18 states were offering in-state tuition to undocumented immigrants and 14 offered driving licenses or limited driving permits to the undocumented. National public/private initiatives such as Welcoming Cities and Cities for Citizenship are bringing local stakeholders together to promote the integration of immigrants.

The well-being of immigrants can also be attended through broad social policies, from housing to education, from the social safety net to workforce development. Because immigrants now make up a substantial share of the U.S. population, policy makers, service providers, and government agencies face the challenge of incorporating the needs and perspectives of immigrants in these broad policies.

Fortunately, federal government agencies are becoming more immigrant-conscious. For example, in July 2014, President Obama requested that the Department of Labor’s Office of Civil Rights issue guidance on the eligibility of immigrants for workforce development programs in his Job Driven Training initiative. Similarly, the the Dept. of Housing and Urban Development’s Office of Fair Housing and Equal Opportunity issued guidance on immigration status and housing discrimination. The Dept. of Education’s Office of Technical, Career, and Adult Education created the Networks for Integrating New Americans initiative, a five-city project (Providence, Boise, White Center, Lancaster, and Fresno), which positions adult education programs as key contributors to immigrant integration. The Dept. of Health and Human Services released Promising Practices for Increasing Immigrants’ Access to Health and Human Services and issued an executive action that requires all agencies serving immigrants to develop plans to serve language minorities. The White House also made it explicit last year that some training funds for dislocated workers can be used for qualified foreign-trained immigrants.

Immigration policy, immigrant-specific policy, and immigrant-conscious policies together foster the social and economic success of this population. Many of these polices result in better programs and services for the overall population as well. For instance, making work safety campaigns more accessible to immigrants often results in better safety materials for all workers. Making the business formation process easier and more accessible to immigrants also results in a more efficient process for all prospective business owners.

Population Figures and Immigrant Status
From 2000 to 2013, the U.S. immigrant population grew by 33 percent, from 31 to 41 million (Graph 1). With the aging of the U.S. workforce and a decreasing fertility rate, it is expected that by 2050 virtually all population growth will come from immigrants and their children. 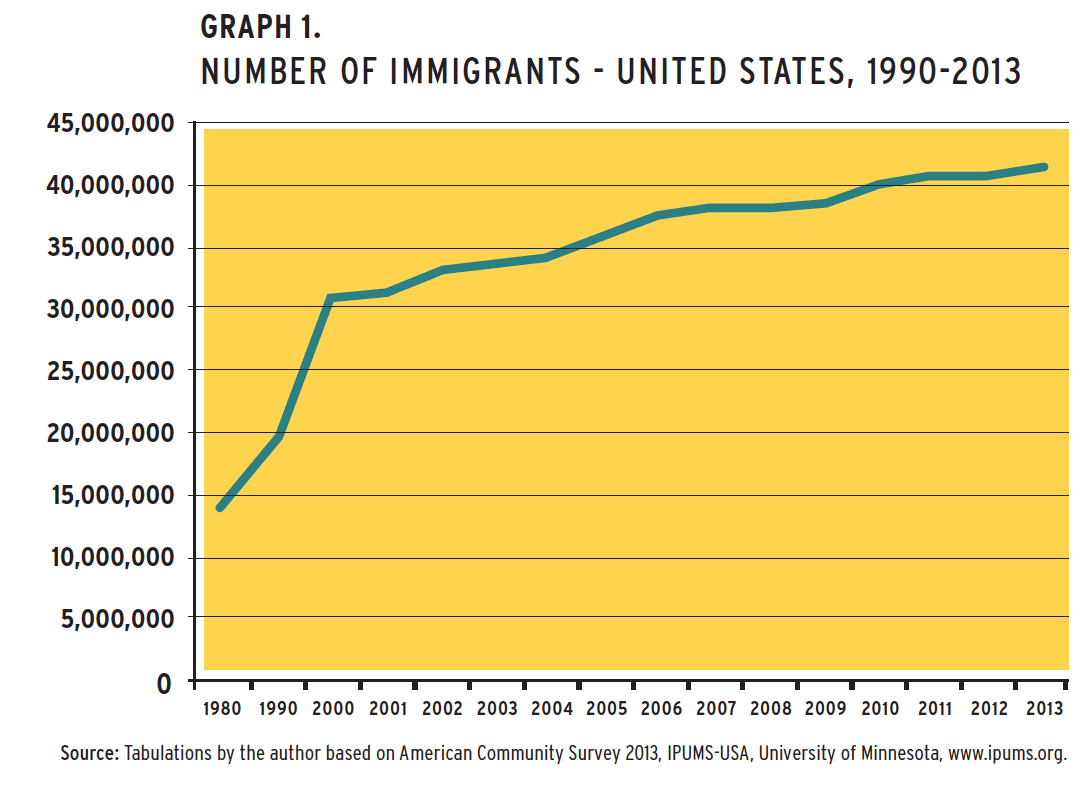 Those 41 million newcomers have varying immigration statuses, conferring different levels of access to things like voting, federal government jobs, counsel in a deportation hearing, and employment and government benefits. Some immigrants are legal permanent residents. Since 2002, the Dept. of Homeland Security has awarded legal permanent residence to between 800,000 and 1.1 million people annually. Other immigrants hold temporary residence permits, such as those who enter with temporary working visas, foreign students, those given temporary protection status because conditions in their home country are not safe to return to, or those with temporary stays of deportation.

Other immigrants are refugees, who are required to adjust their status to legal permanent residents within one year of arrival. Still other immigrants reside in the United States without authorization. Most unauthorized immigrants cross U.S. borders without inspections. Others, possibly around 40 percent, entered with temporary permits and overstayed their visas. Finally, a share of the foreign-born population are naturalized citizens.

The Current Population Survey and the American Community Survey are the most readily available data sets to assess the social and demographic characteristics of immigrants, yet these data sets do not contain information on immigration status beyond whether the immigrant is a naturalized citizen. Pew Research and DHS both generate estimates of the number of legal permanent residents and unauthorized immigrants, adjusting for undercount and possible misreporting. In 2012, DHS estimated there were 13.3 million legal permanent residents and 11.5 million unauthorized people living in the United States. DHS also estimated the number of nonimmigrant students and those with temporary work visas at 1.8 million. The count of naturalized citizens in the 2012 American Community Survey was 18.6 million.

The immigration debate of the last decade has focused heavily on issues pertaining to different groups of non naturalized immigrants, such as whether the unauthorized should be legalized, how many temporary workers should be allowed, and how to prioritize who is granted legal permanent resident status.

Country of Origin and Place of Residence
Although the U.S. immigrant population comes from all over the world, 10 countries account for 58 percent of all immigrants. Mexico is the home country of the largest share of immigrants, more than 11.5 million (Table 1). India and the Philippines follow with 2 and 1.8 million, respectively.

Ten states are home to almost three of every four immigrants. California is home to 10.3 million immigrants and New York and Texas to 4.3 million each. In terms of metropolitan areas (Table 3), the largest number of immigrants—5.6 million people—reside in New York City-Newark, N.J.-Jersey City, N.J. The Washington, D.C., metro area is home to 1.3 million immigrants and has the seventh largest population, although D.C. and Maryland were not among the top 10 states. Of the top 15 metro areas, Miami-Fort Lauderdale-West Palm Beach, Fla. has the largest percentage of immigrants in its population—38.9.

Table 3 focuses on the metropolitan areas with the largest total populations, but the immigrant presence is growing in small and nonmetropolitan areas, outside the traditional concentrations of immigration. For instance, the cities of Wenatchee and Yakima, Wash., Atlantic City, N.J., Gainesville, Ga., and Reno, Nev., all have immigrant populations of at least 14 percent.

Table 3 also shows the share of the immigrant population with limited English proficiency (LEP) in the top 15 metro areas. The LEP population is defined as foreign-born persons five years old or older who either do not speak English at all or speak English but not well. In the United States as a whole, 28 percent of the immigrant population has LEP. Of the 15 metro areas with the largest number of immigrants, Los Angeles has the highest share of LEP, with a whopping 37.1 percent. The Washington, D.C., area has the most English proficient population.

One of the starkest differences between the U.S. native-born and immigrant populations is that almost a third of immigrants do not have a high school diploma (Graph 3). However, 27 percent have either a bachelor’s, master’s, professional, or doctoral degree, which is the same share as the native-born population.

For example, the very low levels of education and limited English proficiency restrict the mobility of a large share of immigrants within an economy increasingly demanding of skills; thus workforce development policies should assess the best way to improve their outlook. The numbers also call for more funding to and a rethinking of the way basic adult education and English for speakers of languages training is delivered.

The characteristics of the immigrant population also underscore the need for immigrant-conscious policies in housing and urban development. The large share of immigrants aged 25 to 34 suggests a large demand for housing, as two-thirds of immigrant households contain children and 60 percent of those households are made up of two or more generations. Housing has to accommodate families, especially larger ones. The data also suggests a need for affordable housing, as 68 percent of immigrant households have incomes 200 percent of the federal poverty level or below. Many immigrants live in high cost of living areas like New York City, Los Angeles, San Francisco, and Washington D.C., hence local rental policies, assistance for renters, and education about housing discrimination is especially important in these cities.

Urban development policies can be made more sensitive to the issues of immigrants. The large number of households with children means that communities where immigrants are locating need more schools, playgrounds, and centers where children can go for after-school activities. Local transportation authorities must also think how increases in the immigrant population affect demand for public transportation.

How Nonprofits Are Adapting to Serve Immigrants During COVID

Signaling A Strong Message of Support For Immigrant Neighbors