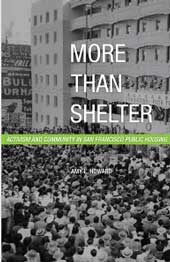 In the 1990s, a group I co-founded, the Eviction Defense Network, was asked by public housing residents to organize alongside them during the HOPE VI process. The HOPE VI process promised to tear down distressed public housing and replace it with new modern homes. The residents we worked with, mostly at North Beach Public Housing in San Francisco, put forward rather modest demands. They wanted to return to their homes, find living wage jobs, and be free of harassment from police and security guards. Predictably, the city’s power structure treated them like pariahs. That’s what happens when low-income people start asking questions about $120 million real estate deals.

During this time, there was also a concerted effort in both mainstream media and academia to flatten the lives of public housing residents into a neat bundle of pathology and problems. This narrative plagiarized the Welfare Reform story explaining poverty solely in terms of individual failings. There wasn’t much room for the stories of the people we met at North Beach: service workers with multiple jobs, World War II veterans, perfectly responsible parents, leaders of 12-step programs, veterans of civil rights activism. There was even less room in those dispatches for discussion of economy, disinvestment, and policy.

Amy L. Howard’s More Than Shelter: Activism and Community in San Francisco Public Housing is a powerful antidote to the one-dimensional portrayal of public housing residents and the context of their lives. She takes a long view of the San Francisco Housing Authority (SFHA), from its founding in 1938 to current times. The book investigates three important SFHA developments: Valencia Gardens, Ping Yuen, and North Beach Public Housing. (Full disclosure: Howard quotes me in several places in the book through secondary sources.)

I had an odd sense of deja-vu reading about the battle over placing Valencia Gardens in the Mission District. The 1940s battle pitted conservative neighborhood groups against the SFHA in a debate that had all of the hallmarks of today’s land-use dust-ups. Business owners cried foul, saying that public housing would depress property values and harm children. A broad coalition of activist groups such as the Congress of Industrial Organizations and the Negro Civic Council pushed for the development. It took a secret emergency meeting of the Housing Commission to approve the plan.

The book is greatly enriched by Howard’s extensive interviews with residents and activists. She describes public housing residents practicing “affective activism”—focusing on intentional relationships to strengthen each other in the face of shared challenges. Such activism is also often called as mutual aid—the ways that people self-organize themselves to provide a measure of safety, economic survival, and camaraderie. These practices strengthened as public stigmatization of public housing increased. Valencia Gardens leader Anita Ortiz describes with great pride the multiracial composition of the development and how residents could turn to each other in times of distress. These stories are something that a bird’s eye view of public policy and economics usually misses.

Equally fascinating is Howard’s in-depth account of the Ping Yuen development, located in the Chinatown neighborhood. She contrasts the neighborhood support for Ping Yuen with the controversy that surrounded Valencia Gardens. This is the book’s strongest chapter as it effortlessly weaves a discussion of immigrant exclusion, international context, and local activism. The SFHA practices that kept Ping Yuen nearly all Chinese exploded as white and black residents charged discrimination. It is here where the reader will want more. The fascinating discussion is cut short and barely scratches the surface of the intense issues of community preservation versus racially blind fair housing practices. These debates are of continued importance to today’s affordable housing providers and the communities they operate in.

Howard concludes the book with a set of sound recommendations and observations highlighting the importance of resident voices in the ever-shifting world of public housing policy. She offers a sober assessment of HOPE VI, although the poor rates of return and retention to the developments are even worse than the numbers she gives, thanks to her reliance on SFHA statistics. (Today, there are only five families at Valencia Gardens who lived there pre-demolition.) (Editor’s Note: For an account of HOPE SF’s attempt to turn this around see “Can San Francisco Get Mixed-Income Public Housing Redevelopment Right?“)

More Than Shelter would have benefitted from a more robust discussion of the politics of privatization that have driven the public housing debate. For this reason, it should ideally be read in tandem with Jason Hackworth’s The Neoliberal City: Governance, Ideology and Development in American Urbanism. Yet, Howard’s book is a groundbreaking accomplishment and a must-read for anyone contemplating the future of low-income housing in the United States. Howard’s command of history, combined with the insight of residents she interviewed, places it far above most other books on the subject.

More Than Shelter was published by University of Minnesota Press in 2014. It is available for sale through Powell’s Books here.