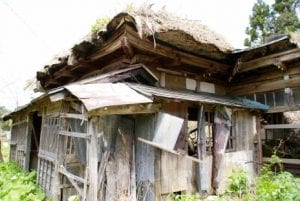 Having just come back from two weeks in Japan, my brain is still overflowing with sensations and images from that fascinating, exciting, and intermittently mystifying country. (I won’t subject Rooflines readers to a travelogue, even though I have lots of pictures I’m dying to show off.)

I want to explore a different issue prompted by my trip, my sense that Japan is inadvertently engaged as a nation in a massive, complex social experiment, which I believe will ultimately have implications for much of the rest of the developed world.

Japan’s population peaked around 2007 or 2008, and then started to decline. By 2050, Japan expects to lose about one-quarter of its population, or 30 million people, give or take a few million. No other nation, at least in modern times, has seen—or expects to see in the foreseeable future—such a level of population loss, equivalent to what has happened over the past few decades in American cities like Baltimore or Cleveland, only spread over an entire country. It will have—and has already begun to have—vast implications for almost every aspect of the country’s society and economy. I call it an experiment, not because Japan has deliberately embarked on this course, but because it will raise (and perhaps answer) fundamental questions about the effects of shrinkage in a world where almost everything is predicated on growth.
The reasons for the decline are straightforward enough. The Japanese people are having fewer and fewer children, and immigration—which keeps the population of the United States from shrinking—is negligible. Neither is likely to change significantly any time soon.

Can a country maintain an enviably high standard of living—which Japan certainly has—and provide services for a fast-growing dependent population with a rapidly shrinking workforce?

Some people think so. A few weeks ago, Masayoshi Son, the charismatic CEO of telecom giant SoftBank, gave a major speech in which he said not to worry, robots will solve Japan’s workforce problems. With the country facing a potential shortfall of nearly 1 million eldercare workers over the coming decade, caregiver robots have already begun to appear in retirement centers and nursing homes. SoftBank has invested heavily in developing a humanoid robot called Pepper, designed to sense and respond to human emotions. Pepper should go on sale next year for slightly under $2,000. Who knows whether this will work, but I have my doubts. One likely outcome is that people will work longer. Amazingly, Japan has only just now raised the mandatory retirement age from 60 to 61, and will raise it gradually to 65 by 2025. Increasingly, though, people who reach retirement age in government or large corporations keep working; 5.7 million Japanese over 65 are working, mostly in the service sector, but even some farmers. This may put off the day of reckoning, but is unlikely to solve the problem.

At the same time, the workforce shortage is only one part of the picture. With fewer workers paying taxes, and ever-increasing demands on the pension, health care, and social security systems, can the Japanese economy—already something of a high-wire balancing act—remain viable? Japan recently raised the national sales tax from 5 percent to 8 percent, with a further increase to 10 percent likely in 2015—but the biggest fiscal impacts of these trends are still many years away.

By 2025, welfare costs—mainly pensions and retiree health care—are projected to reach 24 percent of GDP. Japan will save some money closing schools, but hardly enough. But if the government wants to convince Japanese families to have more children—which they seem to—they will have to increase spending on child care and make other family-friendly moves. Either way, it’s hard to see how the economy will not ultimately hit a wall.

Meanwhile, what about Japan’s towns and cities, not to mention all the houses that won’t be needed? Japan’s population continues to cluster increasingly in major metros—nearly 30 percent of the population lives in the Tokyo area, and another 15 percent in the Osaka/Kobe/Kyoto area—while young people, as in the United States, are moving back to the central cities. Much of the rest of the country is likely to experience population losses of 50 percent or more—Detroit territory.

In 2008, 7.6 million houses (13 percent of all the houses in Japan) were vacant, double the number in 1988. By 2028, the government projects that 24 percent of all the nation’s houses will be empty, more than in American cities like Cleveland or Buffalo. These houses will be everywhere, but disproportionately in rural areas, small to medium-sized cities, and the older (1950s through 1970s) suburbs of major cities. While there has been a lot of discussion in Japan about workforce and aging issues—if little clear progress—the impact of population decline on the country’s cities, and of millions of vacant houses, has yet to surface as a major issue.

What will happen, though, if hundreds of cities begin to face a spiral of population loss, disinvestment, abandonment, loss of fiscal capacity, and inability to maintain infrastructure similar to America’s legacy cities, at a point when the national government, overburdened by welfare costs, is least able to help?

Few people in Japan appear to be raising these questions seriously, let alone suggesting answers. The ultimate question, however, is whether there is a way to shrink gracefully—to maintain a strong economy and quality of life with a declining population and workforce—and whether Japan can find it. While for decades people have decried the focus on growth as the path to prosperity, and called for an alternative paradigm, no one—at least on a national scale—has ever actually tried it out. With many countries, including China, South Korea, Italy, and Germany, likely also to start seeing population declines in the coming decades—although at more modest levels—whatever happens in Japan will resonate far beyond that country’s borders.