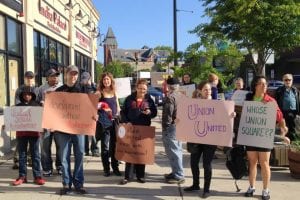 But they are not holding their breath waiting to see what happens, as new a transit line and higher-density and mixed-use zoning plans transform the neighborhood. Instead, they have joined together with service providers, labor unions, immigrant groups, religious institutions, and other community-based organizations to form the Union United coalition.

To paraphrase Facebook Chief Operating Officer Sheryl Sandberg’s book, members of Union United are “learning in.” Women are leaning in when they claim a seat at the executive table and negotiate for their full share of corporate profits. Similarly, Union United members are voicing their demands for an influential place in the decision making process and a share of the benefits of redevelopment. Nor are they simply relying on the city-appointed Civic Advisory Council or public officials’ commitment to resident participation to have their voices heard. They’re preparing themselves for meaningful involvement. They’re learning what to ask for and how to ask for it. So they’re not just leaning in; they’re learning in.

Learning about the potential impact of redevelopment was the impetus for the coalition’s formation. A study produced by the Metropolitan Area Planning Council in conjunction with the Somerville Community Corporation (SCC) and other local organizations found that Union Square is among the neighborhoods along the corridor of the long anticipated transit line extension that are likely to experience the greatest increase in rent burdens and displacement of low income residents. As part of this study, SCC organizers interviewed owners of the 12 acres of private property in the heart of Union Square that have been designated for disposition in the City’s urban renewal action plan. They learned that people were ready to join forces to counteract the predicted trends.

Union United members are learning about their common concerns and hopes for neighborhood. Long-term residents and newcomers, immigrants from several continents, labor union members, artists, community gardeners, and clergy, educators, service providers, and activists are all learning with one another. They’ve formed working groups to devise a set of demands for each of the coalition’s priority areas:  affordable housing, jobs and workers’ rights, small businesses, green and open space, arts and culture, public safety and accessibility, and a participatory planning process.

The coalition is also learning from the efforts of other communities to negotiate community benefit agreements (CBAs) that ensure that residents gain from tax dollars invested in redevelopment and are duly compensated for negative impacts.

They’re meeting with the master developers who have responded to the city’s Request for Qualifications to learn about their preliminary designs and their willingness to work with the coalition on the CBA.  And they’re meeting with members of the Civic Advisory Committee, city officials, and elected representatives to learn which of the coalition’s demands have support and which will require more persuasion.

The stakeholders are also learning how to function as a collective. They’ve created a governance structure and decision making process to ensure that each of the 12 member organizations and working groups have a say in determining the coalition’s next steps.  Three of the organizational partners—SCC, the immigrant advocacy organization the  Welcome Project, and the Community Action Agency of Somerville—have agreed to serve as the coalition’s representatives to take advantage of legal counsel.  And in the coming weeks, they’ll be learning how to speak with a cohesive voice as they present their demands to developers and decision makers.

They’re leaning in to command their place in the transforming neighborhood and they’re learning in as a union that’s united around their emerging vision for the equitable redevelopment of their neighborhood.