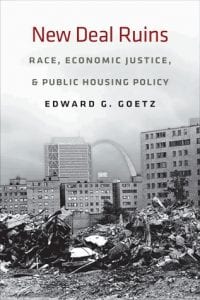 On April 23, 2014, a report was issued from the office of the New York City Comptroller, examining the problems facing the city’s residents in their search for housing. The headline in the New York Times read, “New York City Housing Push Should Aim at Poorest, Report Says”. The rise in rents between 2000 and 2012 had hit apartments in the range of $400-$800 the hardest.

The disappearance of such apartments—often discussed under the rubric of “gentrification”—is part of a much larger process of uprooting the poor. The two excellent books examined in this review—Edward Goetz’s New Deal Ruins and Lawrence Vale’s Purging the Poorest—go a long way toward helping us get a handle on the larger processes at work in the American city.

Both authors focus on the story of HOPE VI, the federal policy that has supported the demolition of public housing across the nation. Goetz is concerned with examining both the process and the available evidence on the outcomes, while Vale provides two detailed case studies, one in Atlanta and one in Chicago. What is clear from both authors is that U.S. housing policies are very problematic for the poorest and most vulnerable residents.

There are several kinds of problems that are evident in these thoughtful analyses. First, policies and economic limitations have created a housing famine. HOPE VI and other public housing programs have contributed to this by uprooting the poor and replacing their housing with housing for more affluent groups. The clearance of housing—and Vale’s “twice-cleared communities” reminds us that not only has this been done, but also it has been done more than once—has consistently depleted the number of units available to the poorest citizens without replacement. Vale notes, “In 2011, HUD reported that 7.1 million American renter households faced ‘worst case housing needs,’ meaning that they received no housing assistance despite having an income less than 50 percent of the median in their metropolitan area and paying more than half of that income for housing, or else lived in a home with severe problems such as missing plumbing or no heat.”

Second, as Goetz points out, “uprooting” is seen as a solution to problems of poverty, but there is little justification for this. He notes, “The mere act of relocating to a new neighborhood does little, if anything, to address the basic conditions that affect employability and health. Not only is there an absence of some expected benefits, but most research indicates that forced relocation upsets carefully constructed support networks and survival strategies employed by the very low income residents of public housing.”

Third, the processes of HOPE VI, though meant to be inclusionary and democratic, have largely been imposed by governments with little regard for the pleas of residents of the affected projects. The research reported in these two books returns over and over again to the finding that even people living in very distressed public housing had affection for their homes and regard for their social networks. The many possible solutions that might have made distressed public housing functional were overlooked in the context of larger neo-liberal policies that were cutting the safety for the poor.

This lands us at a moment when the Bloomberg administration is replaced by the Bill de Blasio administration, and the mission of undoing rising inequity is squarely on the table. The comptroller’s call for the attention to the housing needs of the poorest is clarion call. It is interesting that New York City is not alone in expressing such a perspective at this time. The Place Matters Team of the Department of Health of Alameda County contributed to a report by Causa Justa: Just Cause, called “Development without Displacement: Resisting Gentrification in the Bay Area.” Jean Tepperman, writing in the East Bay Express, noted that the report argued that, “…the current trend—rising housing costs pushing lower-income residents out of their communities — can be stopped… [The report] advocates for specific policy changes—and a whole new vision of development.”

Fundamental to the kind of change called for in these reports is a shift from “purging the poorest” to housing the poorest. This leads directly to the larger agendas of education for all and jobs for all and health care for all and weatherization for all, indeed embracing a new incarnation of the New Deal Agenda that Goetz’s warns us is falling in ruins.

The books are complementary, and it’s helpful to read both (but you could also read just one, Goetz for outcomes, and Vale for the blow-by-blow). One or both—you need these books to be prepared for managing the housing famine that is now upon us.