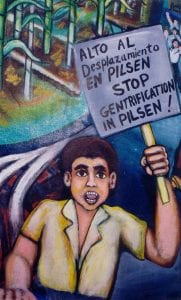 Displaced residents? What’s that? That’s the tone coming from and NPR story detailing new(ish) studies about the effects of gentrification. Further, the studies say that gentrification could actually be a good thing for low-income residents.

When we asked readers to talk about gentrification some months ago, Rick Jacobus touched on a similar point in “It’s Not Either/Or: Neighborhood Improvement Can Prevent Gentrification.” He wrote:

“People tend to talk as if all neighborhoods fell along a single continuum from worse to better. But, in reality, there is more than one kind of better. My experience has been that residents of low-income communities almost universally want their neighborhoods to be ‘cleaner’ and ‘safer’ and to have more stores even though they generally also recognize that those changes will eventually lead to higher rents.”

And that’s exactly what the studies found. NPR spoke with Lance Freeman, the director of the Urban Planning program at Columbia University, who also held the bias that gentrification causes displacement when starting his research. But, Freeman found that low-income residents were no more likely to move out of their homes when their neighborhood gentrified. For renters, however, it was another story:

“[Freeman] says higher costs can push out renters, especially those who are elderly, disabled or without rent-stabilized apartments. But he also found that a lot of renters actually stay—especially if new parks, safer streets and better schools are paired with a job opportunity right down the block.”

Another study, from the Bank of Cleveland, found that the original renters in gentrifying neighborhoods had better credit scores compared to “non-gentrifying, low-priced neighborhoods.”

This makes sense to me. A safe neighborhood with access to good jobs and schools benefits everyone (See: Does Affordable Housing Lower Nearby Property Values? No). To me, this isn’t groundbreaking. It’s what happens in the neighborhoods that don’t get attention, that are neglected dumping grounds. The neighborhoods where the vacant buildings play a part in determining a child’s income and access years later in life.

This is also where Jacobus also says the danger is: “While it is common to worry about gentrification whenever rents rise, gentrification seems to happen most dramatically in neighborhoods where rents fall creating an opportunity for speculators to ‘flip’ an area.”

There’s no disputing that low-income residents are often left out of the planning when an area changes composition and that people suffer when they can’t afford to stay in their neighborhood. So, with that, what are these studies missing?

(H/t to Davide Price @nuestradavid for finding this!)