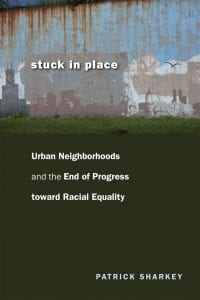 A few weeks ago, I wrote a review of a new book by the Brookings Institution called Confronting Suburban Poverty in America that highlights the growing number of poor people living in suburbs and small cities across the nation. While I have some strong concerns about the Brookings book, it does draw needed attention to the changing demographics of poverty in this country.

Interestingly, when I bought the Brookings book, Amazon.com kindly recommended that I buy another new book that highlights the persistent and long-standing problem of concentrated poverty in the inner city. This book, Stuck in Place: Urban Neighborhoods and the End of Progress toward Racial Equality, by Patrick Sharkey, provides new insights into this old problem.

Drawing on detailed, longitudinal data about white and African-American families over the past several decades (comprehensive and long term data does not exist for more recent immigrant groups), Sharkey documents that the negative impacts of concentrated poverty deepen as successive generations of the same family live in poor neighborhoods, especially for African-American families. Some of Sharkey’s key findings:

Based on these findings, Sharkey has important policy recommendations to offer.

Programs that work only at the neighborhood level can be overwhelmed by larger economic forces, but efforts to focus on regional and national economic strategies often leave challenged neighborhoods behind. Therefore, he concludes, we need to have policies working at all of these levels at the same time.

While the problems detailed in the book can be overwhelming, it was refreshing to read such a detailed and honest account of the challenges we face and such a balanced and thoughtful approach to the policies we need. Sharkey recognizes the need for many different strategies, emphasizes the long-term nature of this work, and cautions against policies that look for a quick fix. With all of this, Sharkey remains hopeful as there is significant evidence that we can make progress if we as a society are prepared to make a deep and durable commitment to doing so.

For those who want to see our country make that commitment, Sharkey’s book is essential reading.