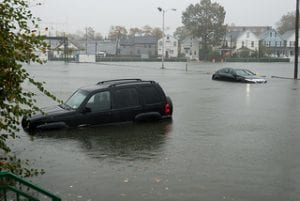 I spent the day at a workshop on July 9 called, “Post-Sandy: The Effect on the Urban,” held at New Jersey Institute of Technology College of Architecture. This rare meeting of the Connecticut, New York, and New Jersey sections of the American Institute of Architects was the first time architects from this large a region assembled to work on a problem.

Morning presentations gave an overview of the ways in Hurricane Sandy affected Newark, Jersey City, and Hoboken. Damon Rich, city planner and chief urban designer for Newark, spoke of the challenges faced by the city with its huge, but rarely acknowledged, waterfront. Rich urged the participants to consider the heavy weight that histories of inequity place on recovery by showing a 1937 redlining map of Essex County to demonstrate how investment was detoured from Newark.

Robert Cotter, urban planner for Jersey City, gave a visual sense of the development that has taken place along the city’s Gold Coast, all of it five feet above the waterline and vulnerable to flooding. Hoboken architect Dean Marchetto explained the vulnerabilities of the city, which is literally an island, connected by landfill, and was heavily inundated by Sandy. He idea to protect the city and add land with a seawall could pay for itself, given the value of riverfront land in Hoboken.

Other presentations highlighted the work of architects throughout region:

Jack Purvis and Verity Frizzell presented the results of a workshop helping the residents of Camp Osborn in New Jersey figure how they might rebuild within the context of current zoning codes. Their solution, to raise a platform and group homes in townhouses, was elegant and won the approval of the crowd.

In the afternoon I worked with a small group, including architects Jamie Masters, Rhonda Kearns, and Jason Peist, examining transportation issues in Newark. Newark is a regional center of transportation and much of the rail travels through a narrow bottleneck just north of the Passaic River as it curves through the city. Within a short distance of that trouble spot are the Newark Airport and NJ Turnpike, both sit in the zone flooded by Sandy. Newark is fortunate to have redundancy of travel systems, including buses, and many roads out to the suburbs. Our group discussed how we might help leave the city, taking into consideration several groups: those with cars, those near buses, and those with neither. Jamie Masters led the sketching for our team, an outline of the transportation networks emerging like a Polaroid as she drew lines on trace paper.

What I got from this day of rich discussion and problem-investigation was that Sandy has awakened new willingness to collaborate across lines. This is a great breakthrough because the problems of water can only be solved through big discussions. Architects will be playing a key role in those conversations and their willingness to gather as a tri-state area will be of great import. Henk Ovink, from the Netherlands, joked that Americans know everything about security, but, he said, “When it comes to water, you don’t care.” Everyone laughed, but the point hit home and the group assembled was keenly aware that we have to care, and we have to work together.

But water isn’t the hardest part to tackle. The social equity issues that Damon Rich urged us to examine are barely considered. There is no system for thinking about the resolution of inequity. Having a map of a flood zone is an excellent tool for discussion, but there is no map of social inequity to help us visualize how those issued played in the cities of New Jersey. And it is at play, to the detriment of us all. Becoming able to see this, in practical ways that help us integrate it into better planning, is an urgent task for this Post-Sandy era.