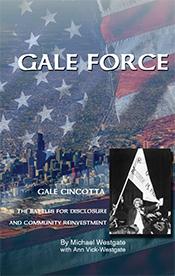 In the name of full disclosure, I worked for Gale Cincotta for more than ten years, starting as a graduate student volunteer in 1973 through staffing her negotiation team in 1984 for the landmark neighborhood lending agreement with then–First National Bank of Chicago (now Chase). I had a great education, but to paraphrase Bruce Springsteen, I learned more from Cincotta than I ever learned in school.

Gale Force by Michael Westgate with Ann Vick-Westgate is a superb biography of a true American hero and an exceptional oral history of the 1970s and the growth of the neighborhood movement as a direct descendant of the civil rights movement of the 1960s. In these troubled economic and political times, this book is extremely relevant today.

The Westgates chose to tell this story from the perspective of those who lived these times and through articles from the national newsletter, DISCLOSURE, that I founded for Cincotta to chronicle how communities across the country were being victimized by the government. “We have found the enemy, and it’s not us,” Gale was noted for saying.

The book details many of Cincotta’s legacies, including two national laws that continue to serve America’s communities today: The Home Mortgage Disclosure Act (HMDA) of 1975 and the Community Reinvestment Act (CRA) of 1977. Chicagoans still benefit from Gale’s leadership in establishing the Chicago Neighborhood Housing Services, which Michael Westgate worked with her on in 1973.

But inherent within all the stories is perhaps Cincotta’s greatest legacy and what first attracted me to her and continues to inspire and shape my professional and personal life – her ability to work with all who were seeking real solutions to community issues. It was not common in the early ‘70s for a church hall to be filled with white ethnics and people of color joined together in demanding redress from their government officials for allowing their homes and blocks to become “cities destroyed for cash,” as the title of Brian Boyer’s 1973 expose of the FHA scandals described them, but Cincotta was able to bring these communities together.

I still cringe today when DC policy wonks tell us FHA is the solution for American homeownership. “We want the private economy to come in our neighborhood,” Cincotta said. As the Westgates capture, Gale was not a political person in the conventional party sense. She didn’t care if you were Democratic President Jimmy Carter or Republican HUD Secretary Jack Kemp, she expected a responsive government. Certainly a point lost on Capitol Hill today.

There are chapters that provide the reader with the Chicago history of Realtors’ block-busting, and for the many who may not have known, the chapter on the Catholic Church details the key role of Father Roger Coughlin and Catholic Charities’ support for organizers at the parish level. For those who knew both Cincotta and Shel Trapp, the book describes the yin and yang of surely the most unique but productive “professional marriage.” Unfortunately, while their voices are captured here for all to read, both Coughlin and Trapp left us last year before Gale Force was published. Their legacies are also part of this story.

I found Chapter 10, “You Gotta Have an Outcome,” to be revealing in its citing of Ford Foundation program officers’ reports. I couldn’t help but acknowledge that their observations were not only true but also explain much about my own managerial style.

One of my contributing stories to the book was Cincotta’s response to another funder’s question of how she could accomplish so much with so small an operation. Without any hesitation, Cincotta replied, “We work miracles here, it’s part of the program.” One of my colleagues put those words on the front of her desk and it became lore for staff motivation.

One correction I have already provided the Westgates for a future edition is a misrepresentation (obviously spread by the American Bankers Association) regarding the 1980 Reclaim America action on the ABA’s annual convention in Chicago. A U.S. Senate staffer, in recounting Cincotta’s assault on McCormick Place by boat on Columbus Day, states that the boat was in danger of capsizing and had to be rescued by the Coast Guard. In fact, then–Chicago Mayor Jane Byrne was welcoming the ABA convention and had ordered Chicago Police boats to be deployed to stop Cincotta’s “Santa Maria II” from landing and reclaiming America from the bankers.

Such “lake” or street theater has always been in the DNA of National People’s Action and remains today. Gale Force includes other such stories, from the 1979 Battle of New Orleans to the 1980 NBC Land Shark appearance at the Federal Reserve Board. But throughout this history, the Westgates remind the reader that Cincotta’s intention was always to win. “This isn’t about civil disobedience. This is about getting a meeting and moving business along. You can’t move business along if you get arrested.”

Gale Force begs the question What if Cincotta had still been with us these past few years? When she died on August 15, 2001, Cincotta’s last words were reported to be: “Get the Crooks.” Unfortunately, 10 years later, after our government stood by and watched our economy be destroyed by greed, “too big to jail” seems to be the current refrain.

This book captures Cincotta well — a most ordinary working class woman without a formal education who managed to do extraordinary things with other everyday people from different races, cultures, and communities. Gale Force tells the story, which we must to continue to spread, of how one person can make a difference. As Cincotta would remind us, the next move is always ours.