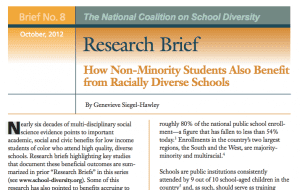 This research brief provides a clear, well-researched argument for the many benefits to white students attending racially diverse schools. Public school enrollment in the United States is now less than 54 percent white students, and yet white students are increasingly segregated in school. This brief describes how white students who are exposed to racial diversity perform better academically, are less prejudiced, and are better prepared to respect and value diversity in the workplace and community as they grow up. It sets the bar high, saying that racially and ethnically diverse schools are the “optimal settings” to prepare students for “an era based on knowledge production, flexibility, innovation and risk.”

This brief offers compelling evidence for school leaders, policy makers, and educational advocates looking to build the case for white families to send their children to racially diverse schools. Most importantly, it should be useful to parents who have any reservations about sending their own children to schools with racially diverse student populations.

My only critique is the misguided use of the word “minority.” Given that one of the arguments for the value of diversity is that whites are becoming the new minority, I wish articles such as this would end the practice of referring to people of color as “minority.” It is increasingly inaccurate, and continues to reflect a “less than” status that I believe researchers like Genevieve Siegel-Hawley are ultimately working to eliminate.